Check Out This Stunning Footage of Virgin Galactic's Space Plane

"Welcome to the club, astronauts!" 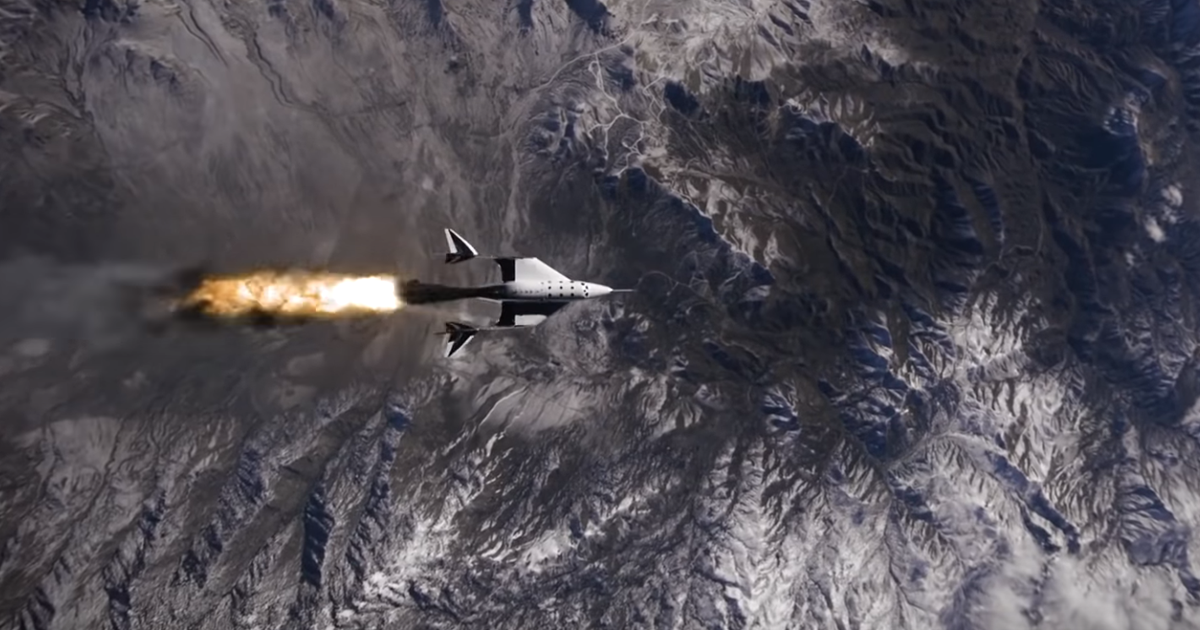 Virgin Galactic's VSS Unity space plane made its way into space for the second time during its fifth test flight on Feb. 22.

And last week, Virgin Galactic released some incredible high-definition footage of the moment its space plane, SpaceShipTwo, was released from mothership WhiteKnightTwo.

WhiteKnightTwo carried the rocket plane up to an altitude of 44,000 feet before it took off on its own to reach a new record altitude of 55.85 miles (89.9km). After being released, VSS Unity can be seen adjusting course and rocketing straight into space.

Pilots officially receive the United States Astronaut Badge, awarded by the Air Force, by flying at an altitude higher than 50 miles (80 km).

"Welcome to the club, astronauts," one of the ground controllers can be heard saying. "Thanks, base," replies one of the pilots on board. "Thanks, I like this club," says the second pilot.

Also on board was the first ever woman to enter space on a U.S. commercial vehicle, chief astronaut instructor Beth Moses.

The video can also be seen as a preview of what's to come for those who want to experience partial weightlessness for a mere $250,000 — that's what it'll cost once Virgin Galactic starts offering tickets for one of the six passenger seats on board the SpaceShipTwo in the coming years.

Read This Next
Selling Seats
Virgin Galactic Lost an Absolutely Staggering Amount of Money Last Year
Off Course
Richard Branson's Rocket Went Way Off Course During Spaceflight
Fun Percent
Elon Musk Denounces "Those Who Attack Space"
Space Pedantics
Richard Branson Didn't Go to Space Yesterday, He Just Cruised Through the Upper Atmosphere
Billionaire Blast Off
BREAKING: Richard Branson Successfully Flies to Space on Virgin Rocket
More on Off World
Cat and Mouse
3:38 PM on the byte
SpaceX to Launch "Hunter" Satellites for Targeting Rival Spacecraft
Space In Space
1:44 PM on the byte
NASA Official Admits There's a Bit of an Issue on the Space Station
No More Hops, Mor...
Yesterday on the byte
Suggestion: NASA Should Make Its Mars Helicopter Do Some Gnarly Tricks From "Tony Hawk"
READ MORE STORIES ABOUT / Off World
Keep up.
Subscribe to our daily newsletter to keep in touch with the subjects shaping our future.
+Social+Newsletter
TopicsAbout UsContact Us
Copyright ©, Camden Media Inc All Rights Reserved. See our User Agreement, Privacy Policy and Data Use Policy. The material on this site may not be reproduced, distributed, transmitted, cached or otherwise used, except with prior written permission of Futurism. Articles may contain affiliate links which enable us to share in the revenue of any purchases made.
Fonts by Typekit and Monotype.