The entire crew got their "astronaut wings," but didn't actually enter space. 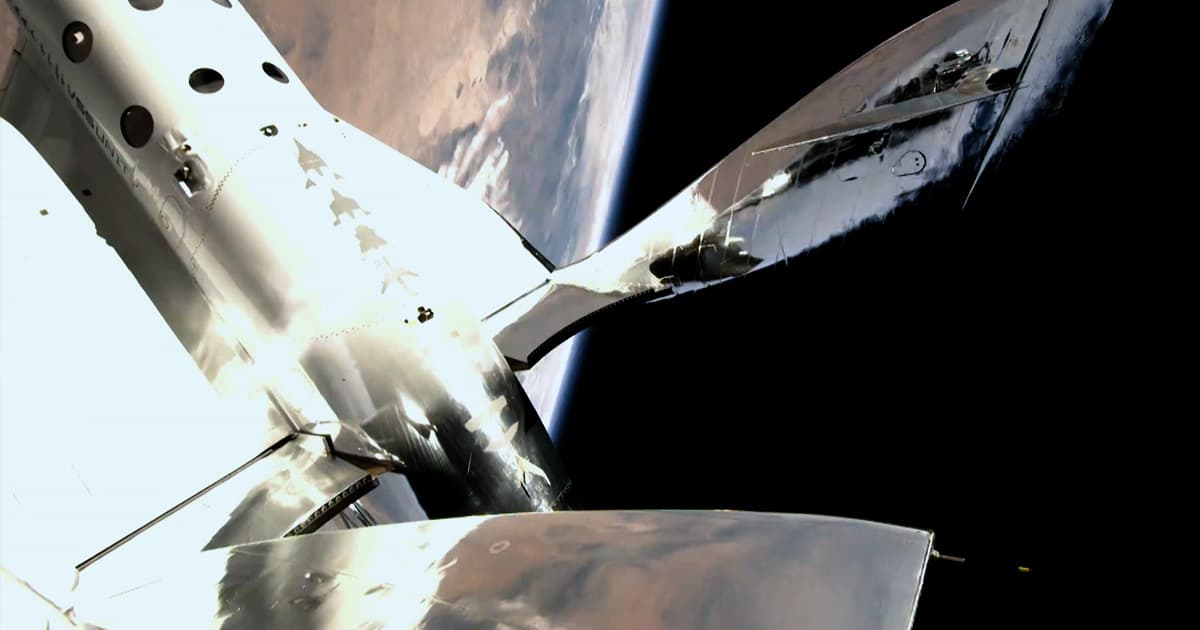 It's the battle of the billionaires.

Virgin Galactic CEO Richard Branson managed to one up competitor and Blue Origin CEO Jeff Bezos by getting to "space" nine days before Bezos could even climb on board his own rocket.

On Sunday, Branson — alongside a crew of six — successfully managed to reach an altitude of 50 miles after being carried to 50,000 feet inside a rocket plane called VSS Unity, attached to the much larger Mothership Eve.

Credit where it's due: it was a genuine achievement and a testament to the many years of hard work put in by Virgin Galactic's engineers. Calling it a trip to "space," though, is an unmistakable exaggeration.

An altitude of 50 miles may be high enough to award the crew "astronaut wings" by the Federal Aviation Administration, but it's still well within the boundaries of the Earth's upper atmosphere, roughly the point where the second and third highest layers of the Earth's atmospheres meet. That region is called the mesopause, and it's also home to the highest clouds in the atmosphere.

Let that sink in. Branson flew pretty high, but there were still clouds up there. Sorry, but that's not space — especially compared to SpaceX, which now regularly shuttles crew and cargo to the International Space Station, approximately five times the height of Branson's apogee.

Branson and crew were able to experience weightlessness for roughly four minutes, caused by the plane falling back down to Earth at the same pace as them. At 50 miles, the force of gravity is about the same as down on the ground below.

The aircraft was also still well short of the internationally agreed upon edge of space, also known as the Kármán Line, at roughly 62 miles.

Technically speaking, the Earth's atmosphere keeps extending for many thousands of miles beyond that, but air pressure is still considerably higher at around 50 miles than it is, say, compared to the altitude at which the ISS circles the planet.

Low Earth orbit generally starts at much higher altitudes than the Kármán Line, at around 100 miles. To circle the Earth at just 50 miles would require massive amounts of thrust to achieve extremely fast velocities — and the orbit would be far from stable anyways thanks to tremendous amounts of atmospheric drag. The thicker atmosphere would also force any spacecraft to reenter the lower layers of the atmosphere almost immediately.

That difference has sparked a fierce debate between Virgin Galactic and Blue Origin, with the latter arguing it is indeed traveling to space — above the Kármán Line — unlike the former.

It may sound like a needlessly pedantic argument, but both space tourism companies are setting the stage for a burgeoning travel industry. For the foreseeable future, tickets to "space" will remain exceedingly expensive — a ticket for a seat on Virgin Galactic's rocket plane costs $250,000.

And even the ultra rich deserve to know whether they actually went to space or not.

More on the flight: Blue Origin Is Officially Feuding With Virgin Galactic

Read This Next
Pale Blue Shat
William Shatner Explains Why His Trip to Space Was Horrible
Monkey Business
China Plans to Send Monkeys to Space Station to Have Sex With Each Other
Overview Effect
William Shatner Says His Space Trip Left Him With a Feeling of Terrible Grief
And Beyond
How NASA Got Price Gouged on the SLS, According to Its Former Second-in-Command
Astronaut Drip
We Just Got the First Peek at NASA's Artemis Moon Landing Suits
More on Off World
Light Me Up
6:09 PM on the byte
Wall of Lasers Cuts Across Hawaii's Night Sky
Water Sign
3:35 PM on the byte
Scientists Find New Evidence of Hidden Ocean World in Our Solar System
Trashing Orbit
Yesterday on the byte
Elon Musk Says SpaceX May Build Starship That Dies on Purpose
READ MORE STORIES ABOUT / Off World
Keep up.
Subscribe to our daily newsletter to keep in touch with the subjects shaping our future.
+Social+Newsletter
TopicsAbout UsContact Us
Copyright ©, Camden Media Inc All Rights Reserved. See our User Agreement, Privacy Policy and Data Use Policy. The material on this site may not be reproduced, distributed, transmitted, cached or otherwise used, except with prior written permission of Futurism. Articles may contain affiliate links which enable us to share in the revenue of any purchases made.
Fonts by Typekit and Monotype.