"Jeff is seriously pissed off." 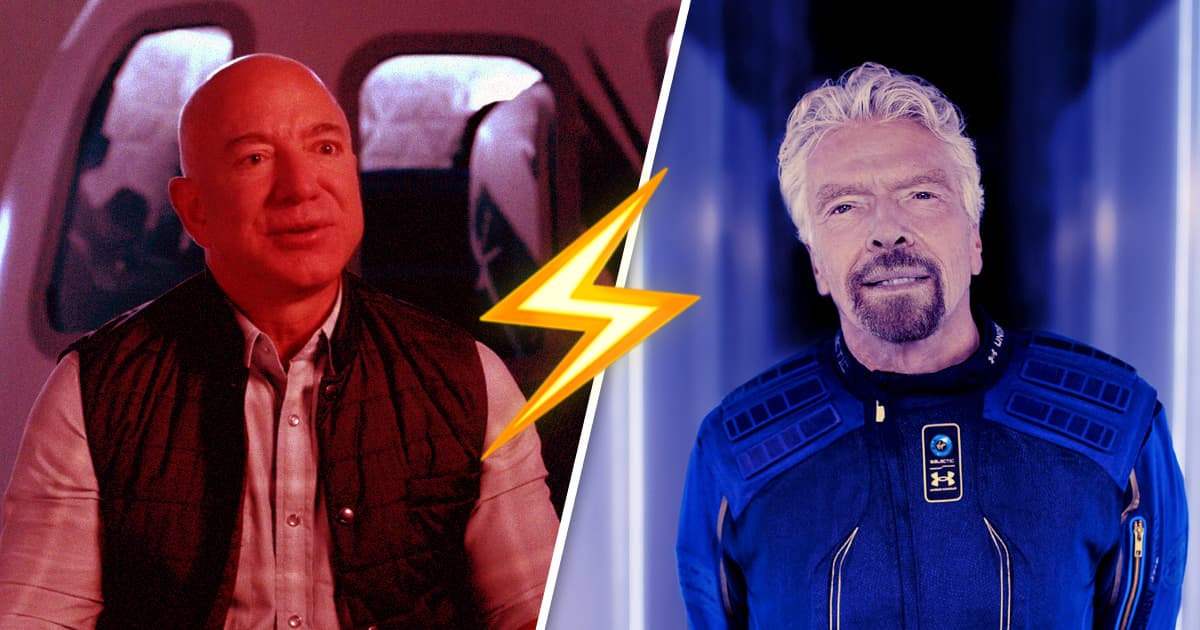 Later this month, Blue Origin CEO and Amazon founder Jeff Bezos will be getting on board his space company's New Shepard rocket to travel to an altitude of 62 miles (100 km).

That altitude, also known as the Kármán line, is the internationally recognized edge of space. And Blue Origin is arming itself with that fact to lash out at its competitor Virgin Galactic.

In an infographic posted to Twitter, the company compared its own services with those offered by the Richard Branson-owned space tourism company.

In other words, the mudslinging has officially begun. Branson recently announced he would be traveling to space over a week before Bezos's own journey — a direct dig at the Amazon founder.

As the infographic makes clear, Blue Origin doesn't think Branson is actually traveling to space. And he may have a point: Virgin Galactic's high altitude space plane VMS Eve isn't actually planning on reaching the Kármán line during Branson's flight, and will only reach an apex of 55 miles.

As such, Virgin Galactic is leaning on a technicality. US astronauts, have to travel above an altitude of 50 miles to get their astronaut wings.

Blue Origin is sticking to its guns.

"We wish [Branson] a great and safe flight, but they’re not flying above the Kármán line and it’s a very different experience," Blue Origin CEO Bob Smith told CNBC in the same piece.

While Blue Origin and Virgin Galactic are throwing potshots at each other, one central question remains: will either company really allow its passengers to travel in space? While the Kármán line may be internationally recognized as the boundary of space, it's a far cry from where astronauts on board the International Space Station orbit the Earth.

In other words, while Bezos will go higher than Branson, both will fall far short of reaching orbit.

That stands in stark contrast to SpaceX, which now routinely shuttles astronauts to the International Space Station and is even taking its first crew of all-civilian passengers on a trip around the Earth on board its Crew Dragon spacecraft in mid-September.

The flight, sponsored by billionaire Jared Isaacman, will take three mere mortals with him to an altitude of 335 miles, roughly 80 miles beyond the orbit of the ISS later this year.

The crew will spend two to four days in low Earth orbit, but won't dock with the ISS.

Bezos, for comparison, will only spend around three minutes teetering on the edge of space. And Branson will only have four minutes to experience microgravity — well within the Earth's atmosphere.

More on the spat: Mischievous Richard Branson Slams Accelerator, Will Go to Space Before Jeff Bezos

Read This Next
Shot Well
Head of NASA Relieved to Hear Elon Musk Isn't REALLY Running SpaceX
Pale Blue Shat
William Shatner Explains Why His Trip to Space Was Horrible
Overview Effect
William Shatner Says His Space Trip Left Him With a Feeling of Terrible Grief
Makeover Scene
Space Tourist Says He's Thinking About Flying SpaceX Craft Up to Fix Hubble
Grain of Salt
There's a Huge Problem With Elon Musk's Promise to Bring Starlink to Iran
More on Off World
Light Me Up
6:09 PM on the byte
Wall of Lasers Cuts Across Hawaii's Night Sky
Water Sign
3:35 PM on the byte
Scientists Find New Evidence of Hidden Ocean World in Our Solar System
Trashing Orbit
Yesterday on the byte
Elon Musk Says SpaceX May Build Starship That Dies on Purpose
READ MORE STORIES ABOUT / Off World
Keep up.
Subscribe to our daily newsletter to keep in touch with the subjects shaping our future.
+Social+Newsletter
TopicsAbout UsContact Us
Copyright ©, Camden Media Inc All Rights Reserved. See our User Agreement, Privacy Policy and Data Use Policy. The material on this site may not be reproduced, distributed, transmitted, cached or otherwise used, except with prior written permission of Futurism. Articles may contain affiliate links which enable us to share in the revenue of any purchases made.
Fonts by Typekit and Monotype.