A Contest Is Sending These Mere Mortals Into Orbit For Free 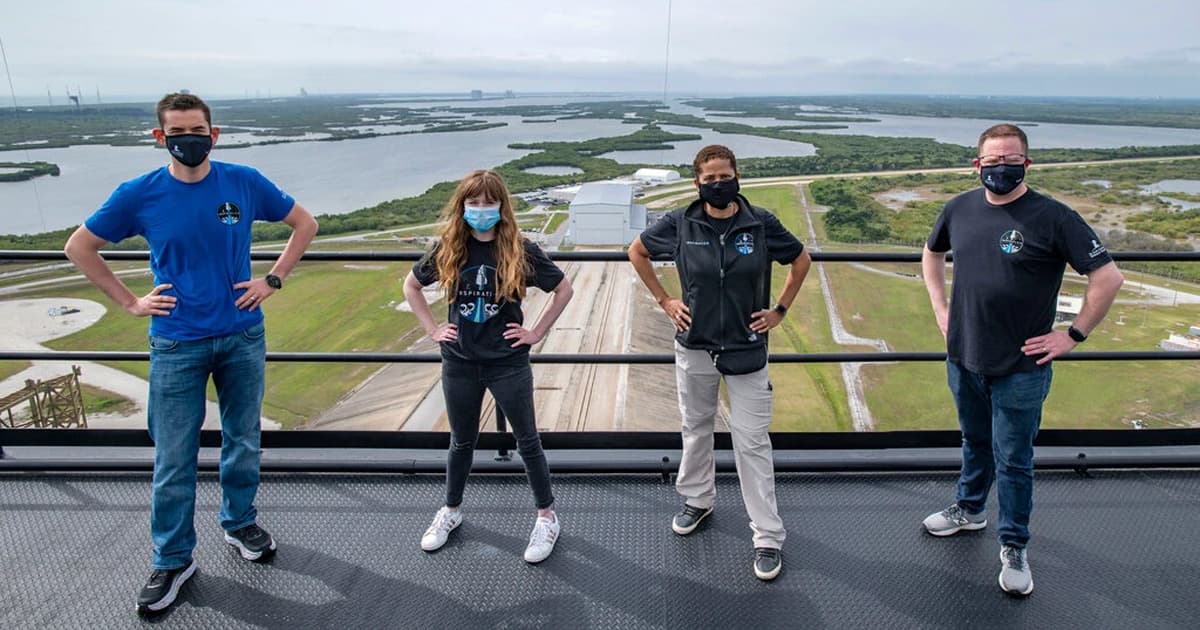 Earlier this year, a billionaire named Jared Isaacman announced that he was picking three lucky winners to go to on a free multi-day journey into orbit on board a SpaceX Crew Dragon capsule.

Isaacman, who is helping finance the expedition — and will be joining in on the fun himself — announced at the time that he's looking to raise money for childhood cancer research through a raffle.

Bone cancer survivor Haley Arceneaux, a 29-year-old physician's assistant, was picked in February. Today, The New York Times reports, Isaacman picked the two other lucky winners to join him on the once in a lifetime journey.

"The stars really aligned for us in terms of this group," Isaacman said.

The plan is to ride the Crew Dragon capsule to an altitude of 335 miles, roughly 80 miles higher than the International Space Station, with launch tentatively scheduled for mid-September.

Proctor decided to pass when asked if she wanted to apply to become an astronaut with NASA after being selected as a finalist in 2009 — but not getting one of the coveted nine spots with the agency that year.

"I said, 'No,' because I just feel like that door has closed," she told the Times. "But I was really hopeful that in my lifetime, maybe commercial space would be available for me. I never in a million years would have imagined it would come just like that and so quickly."

The team of four will now go through health evaluations and then will have to ride a giant centrifuge at the Kennedy Space Center to experience the strong G forces they'll feel during launch and re-entry.

Sembroski spent time as a counselor at Space Camp, a program for children, to get a taste of what it's like to be an astronaut. He's struggling with being in the spotlight and described himself more as "that guy behind the scenes, that’s really helping other people accomplish their goals and to take center stage," according to NYT.

"Everybody’s doing that for me this time," he said. "And that is a completely different and unique experience."

More on the mission: Bone Cancer Survivor Will Get Free Trip to Space This Year

Read This Next
Shoo
Scientists Warn Giant Asteroid Is Actually Swarm, Nearly Impossible to Destroy
A Sip of Opal
NASA Discovers Precious Gemstones on Mars
Moon Wrestling
The Head of NASA Is Scared Chinese Astronauts Will Seize Portions of the Moon
Shot Well
Head of NASA Relieved to Hear Elon Musk Isn't REALLY Running SpaceX
Little Boxes
One Silly Little Detail Is Reportedly Delaying Artemis II by Years
More on Off World
Hall Effect
3:22 PM on futurism
Test Suggests Ion Thrusters Could Power Crewed Interplanetary Missions
CHON: Legacy
3:19 PM on the byte
James Webb Discovers Coldest Ice in Known Universe, Harboring Molecules Essential For Life
Is There?
3:14 PM on the byte
NASA Setting Up Facility For Mars Rock Samples That Might Contain Alien Life
READ MORE STORIES ABOUT / Off World
Keep up.
Subscribe to our daily newsletter to keep in touch with the subjects shaping our future.
+Social+Newsletter
TopicsAbout UsContact Us
Copyright ©, Camden Media Inc All Rights Reserved. See our User Agreement, Privacy Policy and Data Use Policy. The material on this site may not be reproduced, distributed, transmitted, cached or otherwise used, except with prior written permission of Futurism. Articles may contain affiliate links which enable us to share in the revenue of any purchases made.
Fonts by Typekit and Monotype.