Off Course
9. 2. 21 by Victor Tangermann
Off Course
/Off World

The pilots reportedly chose to ignore a red light that lit up in the console. 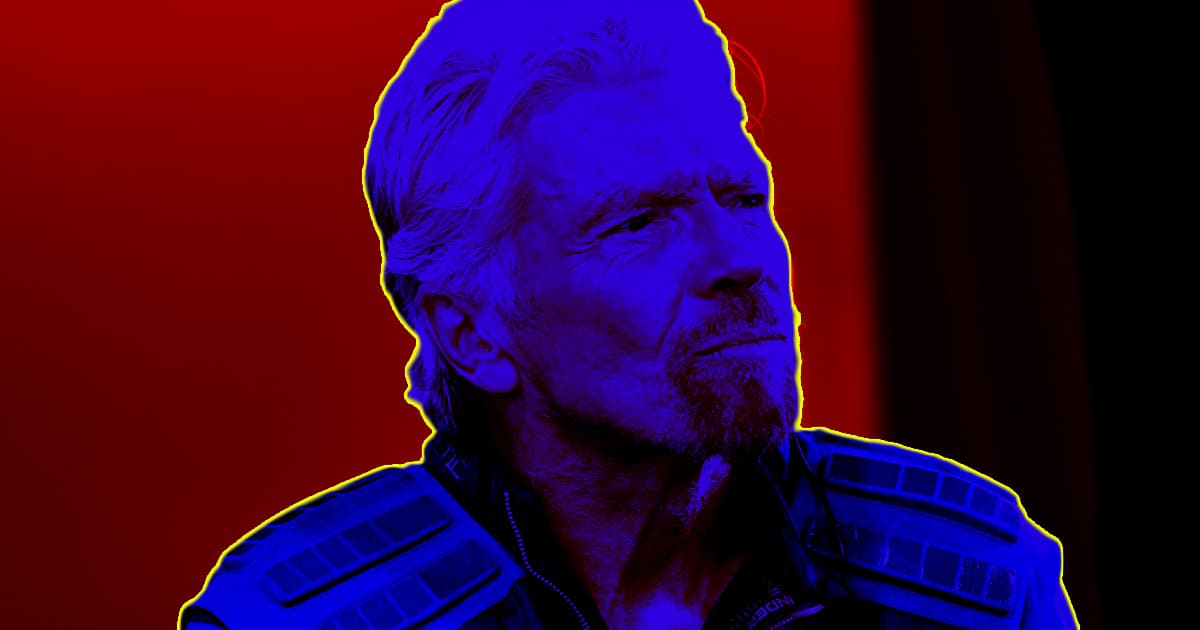 Virgin Galactic CEO Richard Branson traveled high into the upper atmosphere in July on board his space company's Unity rocket plane, an event celebrated as the first time a billionaire CEO did so — despite falling far short from reaching the internationally agreed upon edge of space.

While the views were stunning, it turns out that the flight experienced a serious hiccup, which conveniently is only coming to light now, just shy of two months later.

As laid out by reporter Nicholas Schmidle in a revealing piece for The New Yorker, the crew on board Virgin Galactic's VSS Unity spacecraft were alerted to a red light on the console.

It was bad news. The rocket veered significantly off course, flying outside the airspace designated by the Federal Aviation Administration for a full minute and 42 seconds.

It's a vivid illustration of the risks involved in shooting into near space on board a private spacecraft, and the fact that the operator is likely to keep any unplanned deviations from the mission on the downlow to get ahead of the PR fallout.

The red light was an indication for the pilots to cut the engines — the safest option, according to Schmidle's reporting — potentially stopping Branson's triumphant flight short and allowing rival Jeff Bezos to reach space before him.

Instead, they chose to keep gunning it towards space at three times the speed of sound, attempting to adjust the trajectory for a safe gliding return to the runway.

During a 2015 meeting with the pilots of July's flight, Schmidle was reportedly told that a "yellow light should 'scare the shit out of you,' because 'when it turns red it’s gonna be too late.'"

Worse yet, Virgin Galactic failed to acknowledge the incident to the FAA, a spokesperson confirmed to The New Yorker.

The red light wasn't the only warning sign. Virgin Galactic’s lead test pilot and flight-test director Mark "Forger" Stucky was stripped of his flight duties and excluded from planning for July's flight, following the publication of Schmidle's book "Test Gods" in May, according to the reporting.

Stucky repeatedly warned about protecting the integrity of the program, arguing that the team was "overworked and understaffed" in a 2017 email obtained by Schmidle.

The space tourism company maintains that July 11's flight was a "a safe and successful test flight that adhered to our flight procedures and training protocols," according to a statement obtained by Schmidle, noting that trajectories remained "within mission parameters."

"Although the flight’s ultimate trajectory deviated from our initial plan, the Unity 22 flight did not fly outside of the lateral confines of the protected airspace," the company wrote in a statement to Ars Technica. "At no time did the ship travel above any population centers or cause a hazard to the public."

More on the flight: Richard Branson Didn’t Go to Space Yesterday, He Just Cruised Through the Upper Atmosphere

Read This Next
Monkey Business
China Plans to Send Monkeys to Space Station to Have Sex With Each Other
Overview Effect
William Shatner Says His Space Trip Left Him With a Feeling of Terrible Grief
Astronaut Drip
We Just Got the First Peek at NASA's Artemis Moon Landing Suits
Blast Off
Former Astronaut Details Quest to Grow Cannabinoids in Space
RIP
Unfortunate Comet Flies Too Close to the Sun, Disintegrates and Becomes a Ghost
More on Off World
Grrrrrrrr
4:06 PM on the byte
Internet Erupts as NASA Spots Cartoon Bear on Surface of Mars
Gl1tc4
2:44 PM on the byte
NASA Says Another James Webb Instrument Has Suffered a Glitch
comet Spotting
2:06 PM on the byte
Behold! Dazzling Green Comet Approaches
READ MORE STORIES ABOUT / Off World
Keep up.
Subscribe to our daily newsletter to keep in touch with the subjects shaping our future.
+Social+Newsletter
TopicsAbout UsContact Us
Copyright ©, Camden Media Inc All Rights Reserved. See our User Agreement, Privacy Policy and Data Use Policy. The material on this site may not be reproduced, distributed, transmitted, cached or otherwise used, except with prior written permission of Futurism. Articles may contain affiliate links which enable us to share in the revenue of any purchases made.
Fonts by Typekit and Monotype.