Neither passenger was in the driver's seat. 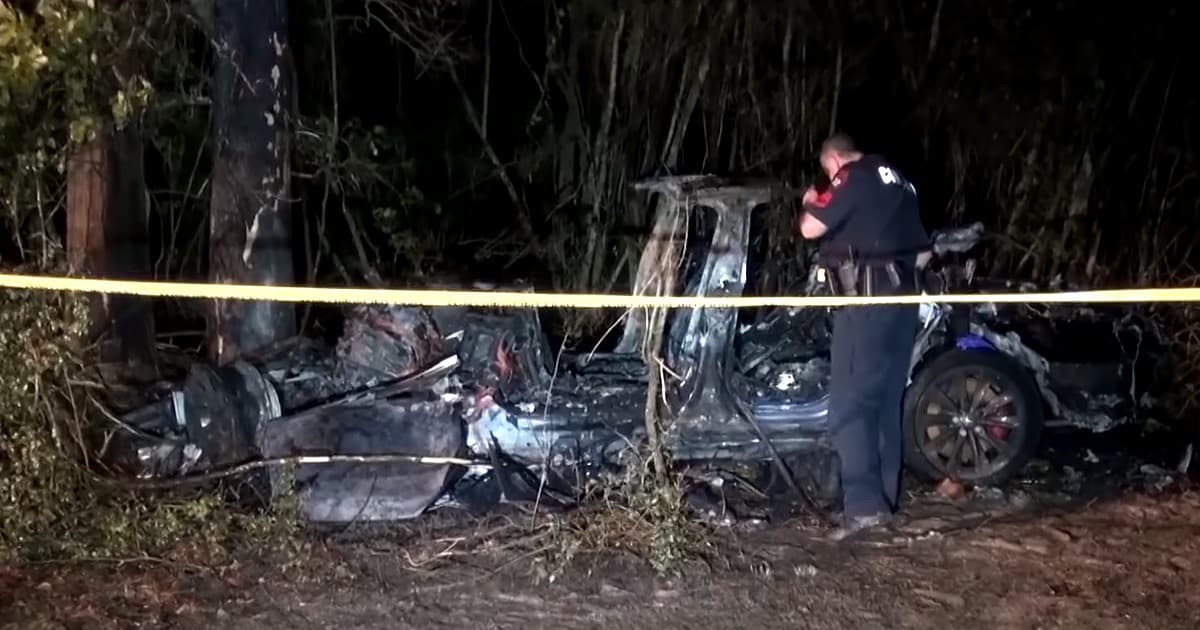 A Tesla Model S crashed into a tree and burst into flames on Saturday evening in Spring, Texas, not far from Houston — but investigators of the wreck found neither of its occupants in the driver's seat.

Following the fatal crash, two bodies were removed from the wreck, neither of which was actually behind the wheel. One person was in the front passenger seat, while the other body was found in the backseat.

"They are 100 percent certain that no one was in the driver seat driving that vehicle at the time of impact," Harris County constable Mark Herman told local Houston news station KHOU. "They are positive."

"Several of our folks are reconstructionists, but they feel very confident just with the positioning of the bodies after the impact that there was no one driving that vehicle," he added.

Thanks to the vehicle's massive battery it took enormous amounts of water — about 30,000 gallons worth — to put out the blaze.

"Normally when the fire department arrives, they have the vehicle fire in control in minutes, but this went on close to four hours," Herman said.

Crews even reached out to Tesla to ask how to put out the fire.

Investigators believe the car failed to make a turn while traveling at high speeds and crashed into the tree, sparking the blaze.

It's still unclear if self-driving mode was engaged, but seems overwhelmingly likely. There have been countless instances of crashes occurring while the car's self-driving feature was turned on over the last couple of years, suggesting that Tesla drivers place far too much trust in the company's "self-driving" technologies.

Some drivers reportedly fell asleep while the Autopilot feature was turned on. Others can be seen performing even more egregious stunts.

In January for instance, TikTok star Johnathon Cook uploaded a video of himself setting up a bed in the back seat of a Tesla Model 3 while it was driving itself down a highway.

Just last month, pair of underage teens in Daytona Beach, Florida, were caught ghost riding a Tesla Model Y. Their excuse: the Tesla was driving itself.

Tesla CEO Elon Musk has refused calls to improve the vehicles' driver monitoring system in the past, suggesting that improvements like eye tracking or infrared sensors would be "ineffective."

With the cars' current tech, drivers still have to be in the driver's seat ready to take over the wheel at a moment's notice.

However, as we have seen earlier this year in Cook's video, these features can easily be fooled into thinking that somebody is in control when in fact nobody's actually behind the wheel.

While the drivers aren't entirely blameless, Tesla's brand positioning on its technology is arguably problematic. To date, the car company still offers a feature called "Full Self-Driving," which isn't in fact what its name suggests. The company even got dinged by a German court, which said the name amounted to false advertising.

This weekend's incident raises a difficult question yet again: where does the blame fall? Is Tesla culpable to any degree in tempting its drivers to drive down a highway without sitting behind the wheel — or are all of these incidents simply a matter of reckless driving?

What's unmistakable at this point in time is the considerable cost in human lives. Tesla could go a long way in clearing up its messaging, especially in the eye of the public, and not just among car enthusiasts and journalists.

READ MORE: Two people killed in fiery Tesla crash with no one driving [The Verge]

More on Autopilot: Underage Teens Caught Joyriding Tesla, Claim It Was Driving Itself