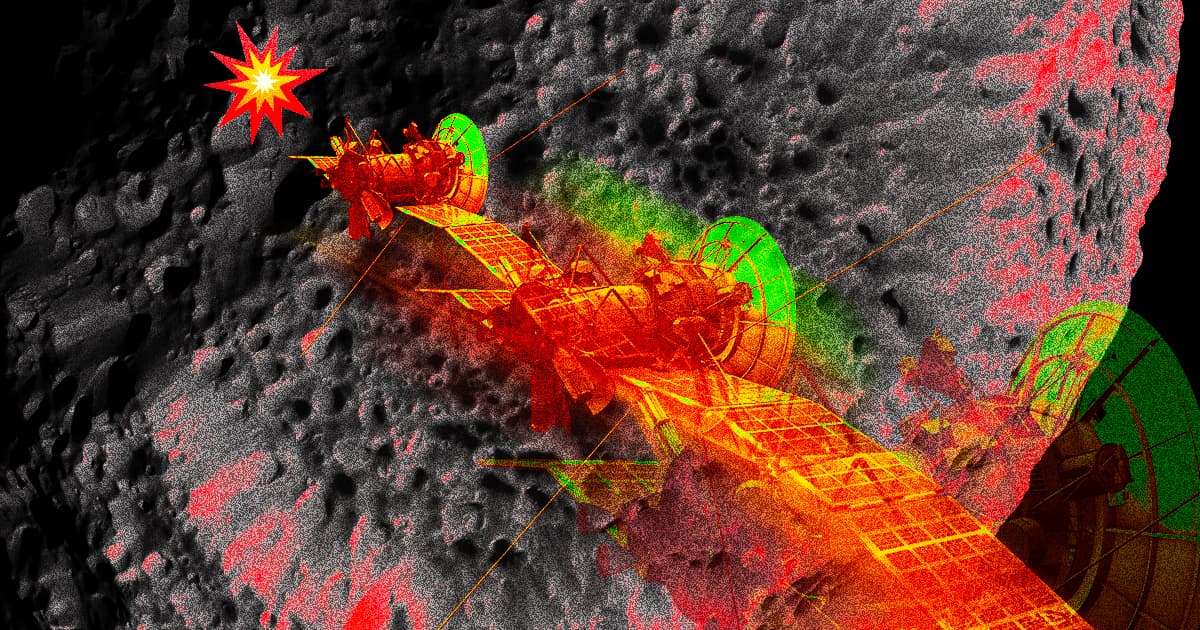 Scientists: We Could Smash Existing Satellites Into a Killer Asteroid to Knock It Off Course

What if our asteroid shields were already in orbit?

What if our asteroid shields were already in orbit?

For years, scientists have worried about what to do if or when a killer asteroid comes our way.

Experts have theorized all sorts of mitigation plans, ranging from knocking it off course with rockets, blasting them with nukes, or even tethering multiple asteroids together. But Airbus scientists commissioned by the European Space Agency (ESA) have a new plan, Space.com reports, and it involves sacrificing the satellites we already have in space — and using them like an orbital shield that deflects asteroids away from the Earth.

With some coordination, the scientists said, the satellites we're building today could be enough to stave off apocalypse tomorrow.

The sky is already getting overcrowded with constellations of smaller satellites, but they won't be as helpful against a killer asteroid as the bigger, heavier duty satellites that we use for telecommunications or TV broadcasts, according to the research.

It's possible that the satellites that exist today could be redirected to form a sort of shield. But it would be easier, the ESA scientists told Space.com if satellites currently under construction got a few planetary defense upgrades before they're launched into orbit.

"These telecommunication platforms, in addition to being large and heavy, are also built with quite a high frequency," Airbus project leader Albert Falke told Space.com. "That means we can expect them to be available readily in the integration facilities [of satellite manufacturers]. That's something we can take for granted."

For example, if telecom satellites slated for launch were outfitted with a rocket and communications module that could carry them beyond geostationary orbit and intercept an asteroid earlier in its approach, it would take fewer satellites to save the planet because they wouldn't need to knock it quite as far off course. According to the research, just ten such telecom satellites launching a coordinated bombardment would be enough to send a 1,000-foot-wide asteroid — large enough to be cataclysmic — safely careening away.

More on asteroid defense: The US Government Is Trying To Figure Out the Best Way To Nuke an Asteroid

X-Ray Vision
A New Satellite Can Peer Inside Some Buildings, Day or Night
12. 16. 20
Read More
Space Pirates
SpaceX Is Launching a Fleet of Pirate-Hunting Satellites
7. 17. 20
Read More
Playing Chicken
SpaceX Wouldn't Move Its Satellite to Avoid a Collision, Says ESA
9. 3. 19
Read More
+Social+Newsletter
TopicsAbout UsContact Us
Copyright ©, Camden Media Inc All Rights Reserved. See our User Agreement, Privacy Policy and Data Use Policy. The material on this site may not be reproduced, distributed, transmitted, cached or otherwise used, except with prior written permission of Futurism. Articles may contain affiliate links which enable us to share in the revenue of any purchases made.
Fonts by Typekit and Monotype.