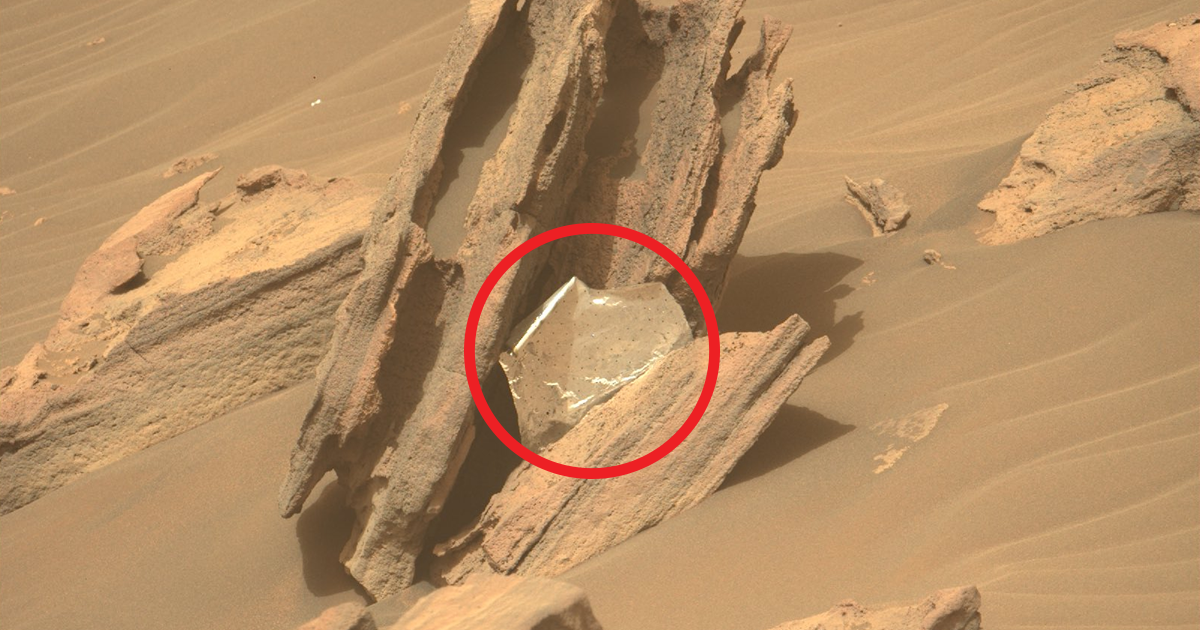 As it rolled its way through the beautiful Jezero Crater, NASA's Perseverance Mars rover spotted something interesting tucked into a small boulder. Upon closer inspection, the robot's team was able to confirm that it was not, in fact, a sign of extraterrestrial life — just a regular ol' piece of human trash, which NASA believes came from, well, NASA.

"My team has spotted something unexpected," tweeted the rover, or at least its longsuffering social media manager. "It’s a piece of a thermal blanket that they think may have come from my descent stage, the rocket-powered jet pack that set me down on landing day back in 2021."

Space debris — which has proven itself to be a threat to astronauts, the Earth, and, increasingly, the other pristine, human-less celestial bodies in our solar system — is a growing concern that off-planet industries have had to grapple with in recent years.

Thus, coming across a bit of litter on the Red Planet isn't necessarily a surprise, although the location of the garbage did throw the Perseverance team for a bit of a loop. As the roving robot elegantly pondered, again on twitter: "My descent stage crashed about 2 km away. Did this piece land here after that, or was it blown here by the wind?"

But unlike Katy Perry's enduring metaphor, wherein the plastic bag drifting through the air might one day start again, there's not yet a reduce, reuse, recycle plan on the Red Planet. Unless it takes to the wind once more, this fragment of NASA waste will likely stay put for quite a while.

READ MORE: NASA's Perseverance rover captured images of its own litter, and it shows how Mars is becoming a junkyard [Business Insider]

Carbon-Based
NASA Rover Finds New Potential Evidence for Ancient Life on Mars
Yesterday
Read More
Duck and Roll
Russia Forced to Dodge Space Debris From When It Blew Up Satellite
Jun 17
Read More
Round Trip
NASA Reveals Early Plans to Send Two Astronauts to Surface of Mars
May 18
Read More
+Social+Newsletter
TopicsAbout UsContact Us
Copyright ©, Camden Media Inc All Rights Reserved. See our User Agreement, Privacy Policy and Data Use Policy. The material on this site may not be reproduced, distributed, transmitted, cached or otherwise used, except with prior written permission of Futurism. Fonts by Typekit and Monotype.