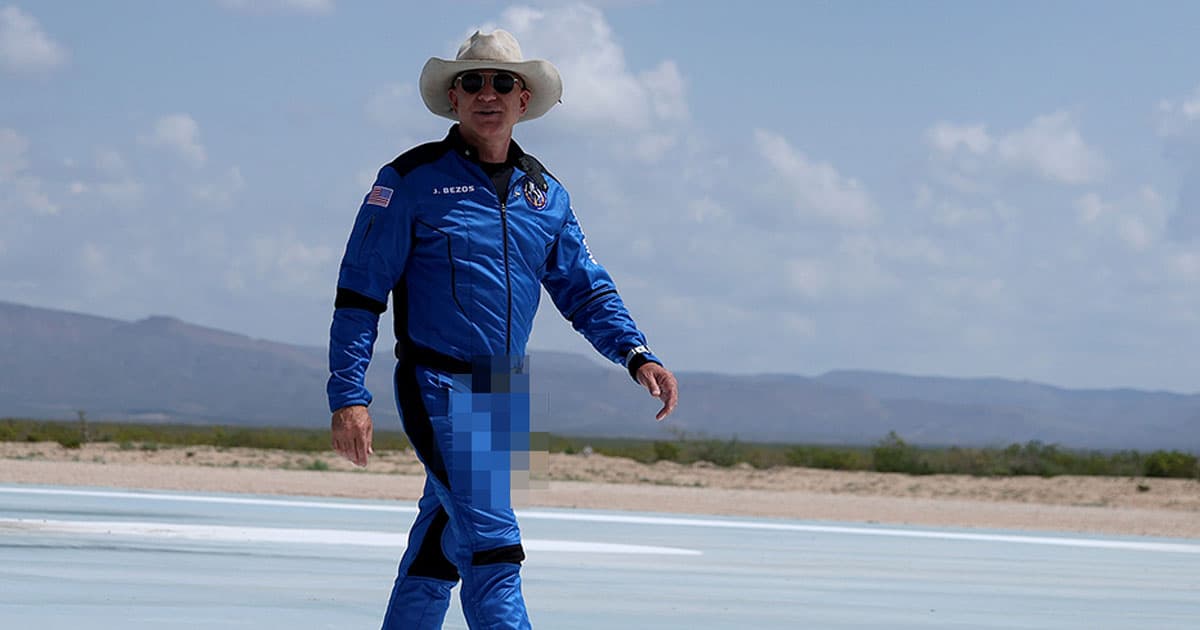 Maybe he wanted to showcase his best assets.

Maybe he wanted to showcase his best assets.

When you’re trying to thrust a giant rocket into space, size matters. Apparently size also matters to Jeff Bezos, founder of Amazon and private space outfit Blue Origin. According to Bloomberg, Bezos didn’t like the way his crotch looked in the Blue Origin spacesuit, forcing a last-minute fix before a looming launch.

Back in July 2021, Blue Origin sent its first crew into, debatably, the very edge of space. The team included Bezos and a few others, but you’d be hard-pressed to say their outfits stood out more than founder’s. Bezos sported a giant cowboy hat with big, turned-up side flaps that attracted a great many jokes.

Now, Bloomberg is reporting that the mocking does sometimes get under Bezos’ skin.

“He does have a level of self-awareness,” Craig Berman, a former Amazon vice president for global communications, told the business pub. “I think that may be what may have ultimately contributed to him stepping away from the CEO role.”

Self awareness or not, Bezos sure does know how to make an impression. Because his crotch didn’t fit quite right, multiple outlets reported he had his tailor flown in to Texas to make the adjustments.

Hey, if you got it, flaunt it, right?

The crotch debacle is really just the latest in a history of eyebrow-raising headlines about the phallic-shaped rocket that Bezos and Blue Origin built to take customers high up off the Earth. And yeah, it’s a little juvenile — although even his arch-rival Elon Musk has occasionally gotten in on the fun. But on a much more serious note, Bezos has often drawn public ire for treating Amazon employees badly, disrupting public infrastructure and running off Blue Origin engineers with terrible work culture.

To Bezos, being mocked and being the world’s second richest man is probably a nightmare. If that’s the worst worry he’s got, though, he’ll survive a little criticism — even if it is about his crotch.

More on Bezos’ diva side: Jeff Bezos Demands that Historic Bridge Be Taken Apart So That His Superyacht Can Pass Through