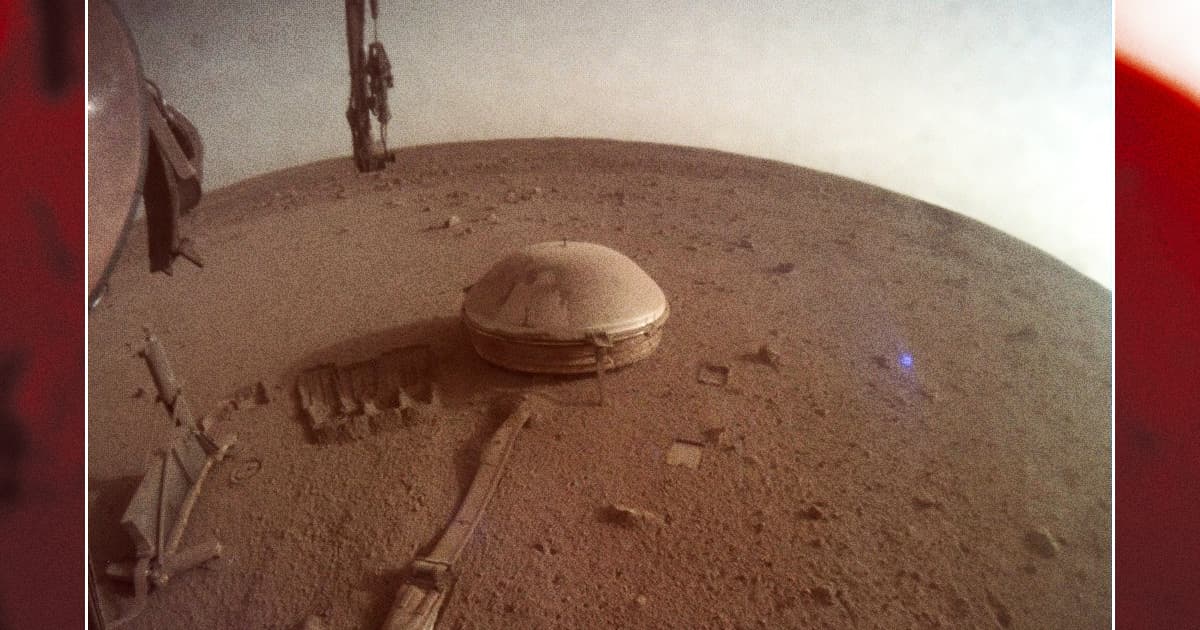 "My power's really low, so this may be the last image I can send."

"My power's really low, so this may be the last image I can send."

The resilient Mars InSight lander is dying again — and this time, it may actually be on the precipice of its demise.

When the seemingly unkillable lander successfully landed on the Martian surface in 2018, the world cheered. Its original mission was only meant to last a year, but InSight has remarkably now lasted an unthinkable four, tirelessly collecting invaluable seismographic readings and much more. In fact, NASA has said that its demise was imminent several times already — but this time, they insist, its power levels are sinking dangerously low and its end really is imminent.

"My power's really low, so this may be the last image I can send," tweeted the NASA InSight account in its trademark first-person, to over half a million likes. "Don't worry about me though: my time here has been both productive and serene. If I can keep talking to my mission team, I will – but I'll be signing off here soon. Thanks for staying with me."

My power’s really low, so this may be the last image I can send. Don’t worry about me though: my time here has been both productive and serene. If I can keep talking to my mission team, I will – but I’ll be signing off here soon. Thanks for staying with me. pic.twitter.com/wkYKww15kQ

[omitted] NASA has been insisting that the lander has been dying since at least the summer of 2021, as more and more dust from the Martian atmosphere accumulates on its solar panels and blots out the feeble Martian Sun.

Back then, it was projected to last until April 2022. But by next winter, NASA claimed InSight was on its last legs yet again, this time predicting it would last until the end of 2022.

And yes, for the umpteenth time in May, NASA said in an update that InSight was going to die — for real this time — by December.

Its operators have been trying every trick in the book to keep the lander going — even pouring dirt on itself in a risky but ultimately successful bid to clean dust off its panels — but it looks like this time around, this might actually be InSight's demise after all. Yet, we can't help but feel that the narrative around it is a little "Lander Who Cried Wolf."

It's not hard to understand why NASA would milk it, though. When a reporter had summarized the late Opportunity Rover's last transmission as "My battery is low and it's getting dark," it made waves across the internet, spawning memes, posters, sympathies from reporters and celebrities, and plenty of teary-eyed onlookers believing that those were really Opportunity's last words.

Given everything InSight has gone through, maybe it's time for us to finally let it go and allow it the rest it deserves. But who knows, maybe it'll surprise us one more time.