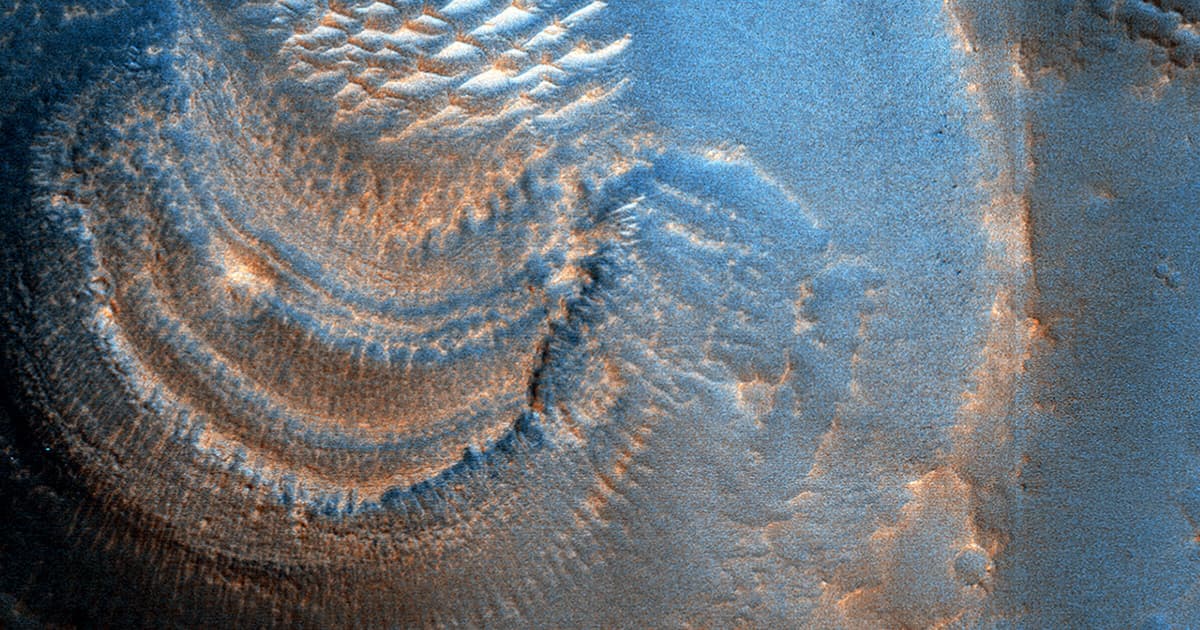 We can only guess as to why these features were formed.

We can only guess as to why these features were formed.

The discovery, as evidenced in stunning images captured by MRO's HiRise camera, has scientists intrigued. The dazzling patterns etched into the Martian surface, Geissler and his team believe, may represent the permanent markings left behind by Martian ice heated by the Sun, a fascinating glimpse into the planet's extensive and water-rich history.

The deposits were only found inside craters in the northern plains of Arabia Terra, a large and heavily eroded and cratered region north of the equator.

Interestingly, not all craters in this region showed the remains of these mysterious deposits. According to Geisler, they only showed up in craters that measure 2,000 feet across and larger — and not in those that are roughly 1,500 feet in diameter and smaller.

"The deposits have horizontal laminations that could be layers or terraces," he wrote. "The deposits also have radial striations formed by small bright ridges."

Geissler and his team suspect these puzzling features are caused by ice-rich material turning from a solid into a gas, with each terrace representing a different stage in this process.

Scientists believe Mars was once teeming with water, which later turned into ice that has seeped into the planet's arid surface over billions of years.

"Perhaps the larger craters penetrated to a water table between [147] and [196 feet] below the surface and were flooded after formation," the blog post reads.

The disappearing of Martian ice is causing all kinds of fascinating landscapes to form over time.

Other craters, such as the "Happy Face" found in Mars' icy southern pole region, are believed to have been formed by sublimating frost over many years.

While we can't say for sure what's behind these latest mysterious observations, they provide another fascinating glimpse into the kind of discoveries NASA's Orbiter still can afford us, despite having been launched over 17 years ago.

More on MRO: Meteorite Hit Mars So Hard NASA Thought It Was a Quake