Meteorite Hit Mars So Hard NASA Thought It Was a Quake

It opened a massive gash, exposing ice beneath. 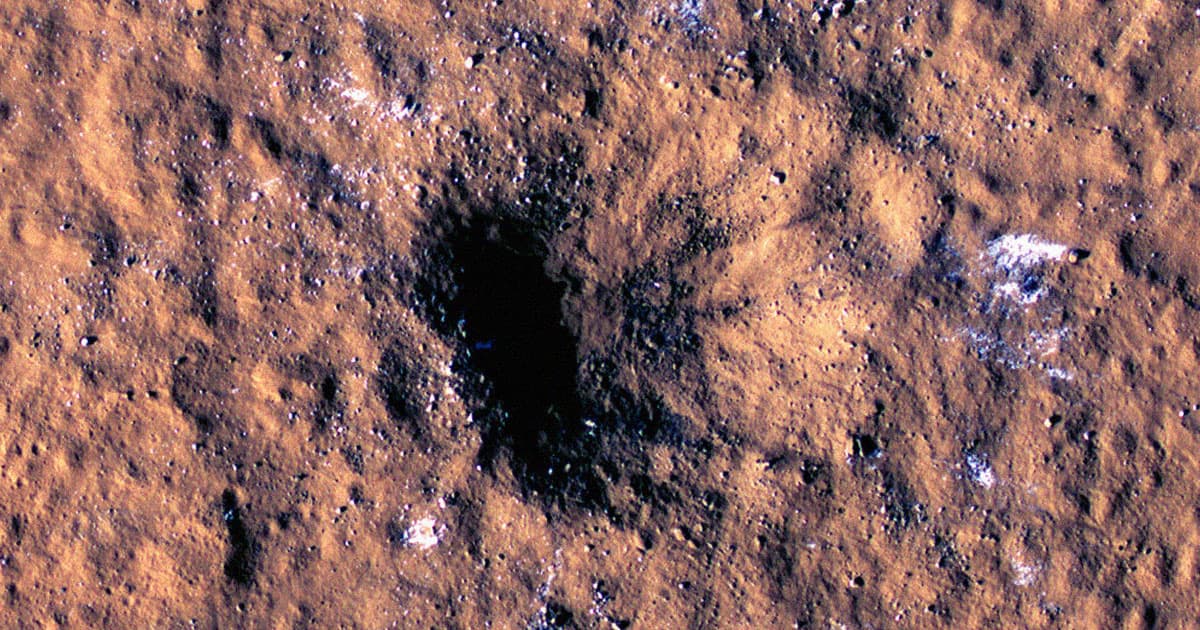 NASA's InSight lander's days may soon be numbered on the surface of Mars — but that hasn't stopped it from providing scientists with invaluable data.

The lander detected what appeared to have been a magnitude 4 marsquake — the Red Planet's equivalent of an earthquake — on Christmas Eve last year, a powerful tremor that caught the attention of scientists at NASA's Jet Propulsion Lab.

In fact, according to a NASA blog post, it may have been one of the most significant rumbles "seen on Mars since NASA began exploring the cosmos."

Now, thanks to data collected by the space agency's Mars Reconnaissance Orbiter (MRO), researchers may have stumbled upon the cause: a powerful meteorite impact, meaning the tremor was not, in fact, the result of tectonic shifts deep inside the planet itself.

It's also one of the largest meteorite impacts to have ever been witnessed directly in our solar system, NASA said, excavating a massive gash in the planet's surface and exposing a layer of ice beneath — a tantalizing glimpse at a resource that could keep astronauts alive during future visits to Mars.

In fact, the blast zone also happens to be very close to the planet's equator, a region considered to be a great place for astronauts to visit because it's relatively warm.

"It’s unprecedented to find a fresh impact of this size," said InSight team member Ingrid Daubar, in the statement. "It’s an exciting moment in geologic history, and we got to witness it."

According to NASA's calculations, the meteoroid must have been between 16 and 39 feet across. Such a space rock would have burned up almost completely while traveling through Earth's atmosphere, but the Martian atmosphere is thin enough to let it pass.

The impact was powerful as well, leaving a crater almost 500 feet across and 70 feet deep behind in a region called the Amazonis Planitia.

"Some of the ejecta thrown by the impact flew as far as 23 miles away," NASA writes.

The impact itself sent ripples across the Martian surface, which were then picked up by InSight's seismometer, as detailed in two papers published in the journal Science today.

"The image of the impact was unlike any I had seen before, with the massive crater, the exposed ice, and the dramatic blast zone preserved in the Martian dust," said Liliya Posiolova, a senior scientist at Malin Space Science Systems, which controls two cameras on NASA's MRO, said in the statement.

"I couldn’t help but imagine what it must have been like to witness the impact, the atmospheric blast, and debris ejected miles downrange," she added.

It's a salient reminder of the fact that our planet's atmosphere is really great at protecting us from such impacts.

"These impacts are very large," Philippe Lognonné, lead author of one of the new papers, told The Washington Post, "but we can continue to sleep well on Earth."

"Our atmosphere is protecting us," he added.

More on InSight: NASA's Mars Lander Refuses to Die Even Though It's Supposed to

Read This Next
Fighting Words
Retired NASA Astronaut Scott Kelly Dishes on Ukraine, Russia, and Moon Mission
Psychological Warfare
Experts Excoriate NASA Report Claiming James Webb Wasn't Homophobic
Failure to Launch
Lawsuit Accuses NASA of Widespread Racial Discrimination
Makeover Scene
Space Tourist Says He's Thinking About Flying SpaceX Craft Up to Fix Hubble
Palliative Care
NASA's Mars Lander Refuses to Die Even Though It's Supposed To
More on Off World
Watery Grave
Nov 22 on the byte
Chinese Military Forcefully Seizes Debris That Philippines Recovered After It Fell From Space
Jetsam
Nov 22 on the byte
Lunar Lander Released by NASA’s Artemis 1 Mission Dies
Not Not Accurate
Nov 21 on the byte
Bad Guy in New "Indiana Jones" Movie Is Nazi Who Works at NASA
READ MORE STORIES ABOUT / Off World
Keep up.
Subscribe to our daily newsletter to keep in touch with the subjects shaping our future.
+Social+Newsletter
TopicsAbout UsContact Us
Copyright ©, Camden Media Inc All Rights Reserved. See our User Agreement, Privacy Policy and Data Use Policy. The material on this site may not be reproduced, distributed, transmitted, cached or otherwise used, except with prior written permission of Futurism. Articles may contain affiliate links which enable us to share in the revenue of any purchases made.
Fonts by Typekit and Monotype.