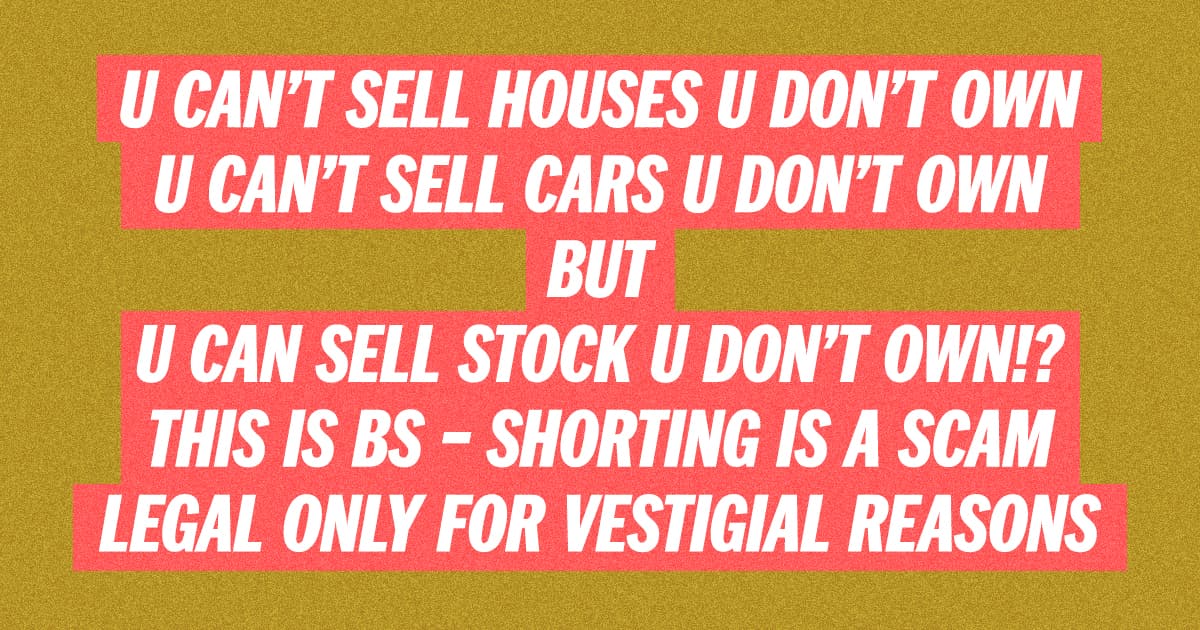 Elon Musk Doubles Down on Wall Street Bets: "Shorting Is a Scam"

Musk says that "shorting is a scam" that's "legal only for vestigial reasons."

Musk says that "shorting is a scam" that's "legal only for vestigial reasons."

SpaceX and Tesla CEO Elon Musk took a break from feuding with the FAA yesterday afternoon to weigh in again on the ongoing Wall Street Bets saga, writing that "shorting is a scam" which is, in his opinion, "legal only for vestigial reasons."

His entire tweet is written in a middle school-esque patois — here's the raw version:

This isn't the first time Musk has waded into the controversy surrounding the Wall Street Bets community on Reddit, which exploded into public view this week by pushing the value of several specific stocks vastly above expectations.

Musk has a tendency to side with memesters and underdogs, which clearly explains part of his affinity for the amateur traders on Wall Street Bets, who are upsetting the conventions of finance.

But his latest comments clarify that he's also drawn to the controversy because of its punishing effect on short sellers — financiers who are betting, essentially, on a specific stock sliding down in value.

The mercurial CEO's aversion to short sellers is well documented, and intimately connected to his time at electric carmaker Tesla. Basically, he has repeated blamed the company's woes on investors who he says have bet against its success — and delighted in outperforming their expectations.

At one point, Tesla's online store even listed a pair of short shorts, in a tongue-in-cheek rebuttal of the practice.

What we know for sure: Musk is sticking to his guns in his war against short sellers, even when the battle takes him outside the boundaries of his own business interests.

More on Tesla: Tesla Is Now Worth More Than ExxonMobil