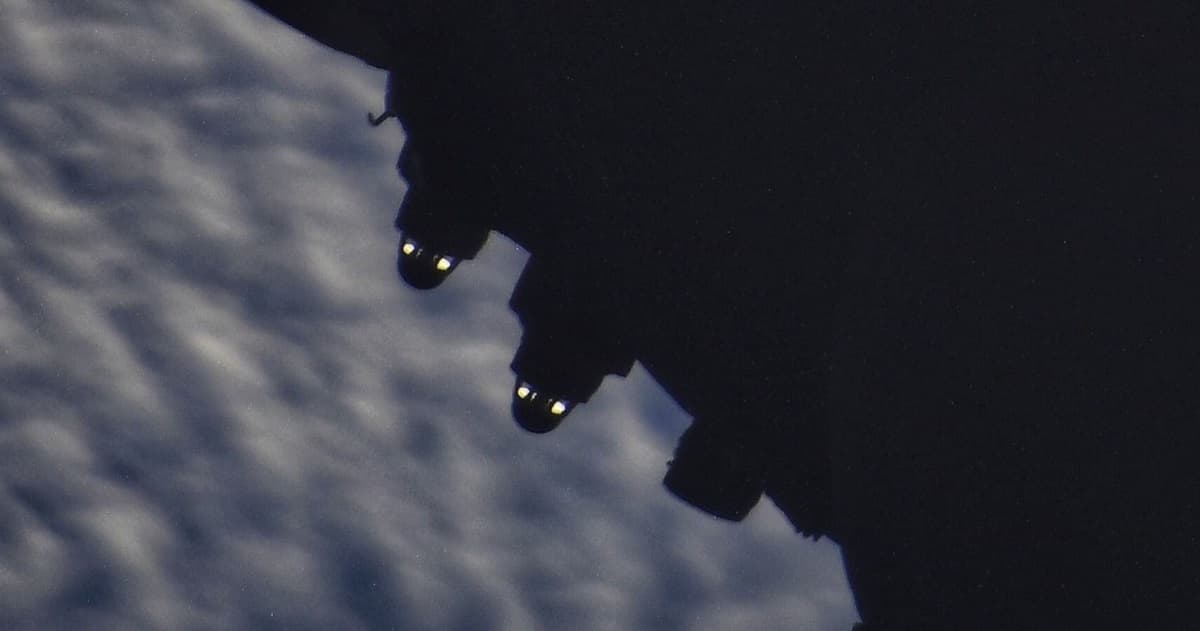 No, These Aren't Weird Visitors on the Outside of the Space Station

"But who are those stowaways watching us?"

"But who are those stowaways watching us?"

ISS Cosmonaut Sergey Korsakov did during the undocking of Roscosmos spacecraft Progress MS-18, tweeting a photo of what appeared to be a pair of "stowaways" gripping to the side of the un-crewed freighter.

Korsakov has a knack for sharing fascinating imagery taken from the International Space Station, including a beautiful — and puzzling — snapshot of a Moon-shaped ice crystal discovered on an ISS window.

Twitter users chimed in with quips about who the endearing eyes might belong to. Daleks from "Doctor Who" and R2-D2 from "Star Wars" seemed to be the most popular answers, among a slew of other fictional characters. Gremlins also got a mention, which we don't totally see, but to each their own.

Thankfully, these surprising little space barnacles are really just lights captured at the right time, not spies from any evil alien civilizations lurking in the Milky Way. Probably.

An alien run-in at ISS right now, it's worth pointing out, would be terrible timing. The space travel community hasn't exactly been drama-free lately, due in large part to the ongoing Russian invasion of Ukraine, as well as China's recent (and potentially sabotaged) efforts to expand its own space station.

But despite some reportedly awkward movie nights and false marooning rumors, relations between astronauts onboard the US-and-Russia controlled space station have remained birthday party-level peaceful. Which is encouraging, given the tension here on the ground. We could all use a laugh — and a moment of wonder — at a great photo by a space traveler.

Sky Eye
Sorry, But New Signal Is Definitely Not Aliens, Says Scientist Working on Project
Jun 15
Read More
Space Invaders
Study: There May Be as Many as Four Evil Civilizations in Our Galaxy
Jun 1
Read More
Alien Fever
Head of NASA Suggests That UFOs Could Be Alien Technology
10. 24. 21
Read More
+Social+Newsletter
TopicsAbout UsContact Us
Copyright ©, Camden Media Inc All Rights Reserved. See our User Agreement, Privacy Policy and Data Use Policy. The material on this site may not be reproduced, distributed, transmitted, cached or otherwise used, except with prior written permission of Futurism. Fonts by Typekit and Monotype.