"When radar and vision disagree, which one do you believe?" 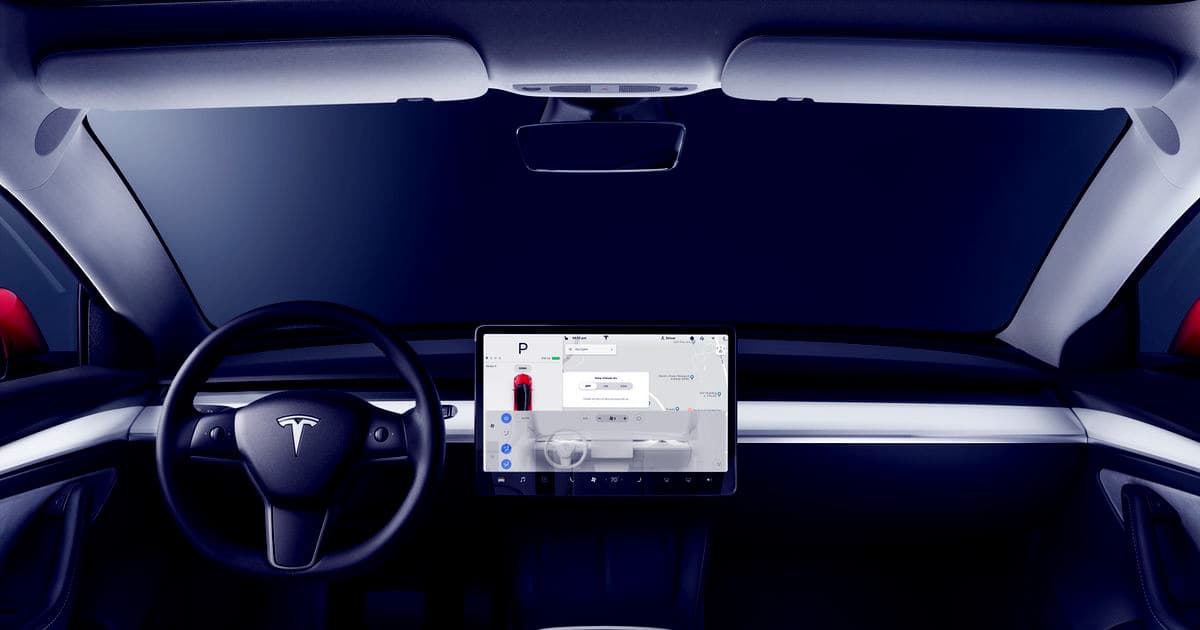 Tesla has decided to make use of the driver-facing camera in its Model 3 and Y cars — to make sure drivers are paying attention while using the self-driving assistance feature Autopilot, TechCrunch reports.

A software update, spotted by several Tesla owners, specifies that the "cabin camera above the rearview mirror can now detect and alert driver inattentiveness while Autopilot is engaged." According to the company, any footage taken by the camera never makes it out of the vehicle, like a closed circuit security camera.

It's a sign that Tesla may be starting to buckle under pressure. The news comes after several reports of Tesla drivers misusing the Autopilot system, including a man seen riding the vehicle from the backseat while fooling the system into thinking there was a driver in the driver's seat — something that's exceedingly easy to do, according to recent investigations.

In the worst cases, drivers abusing — or vastly overestimating the capabilities of — Tesla's Autopilot system ended up being involved in fatal crashes.

Add it up, and the new software update represents a reversal for the company. Tesla has so far not made use of its driver and passenger-facing cameras, instead using sensors in the steering wheel to make sure people are driving attention.

Other car companies have long made use of cameras to ensure that drivers are alert and paying attention to the road, as with General Motors' Super Cruise feature.

Tesla has also come under fire for selling an optional $10,000 add-on called Full Self-Driving (FSD), a feature that doesn't actually allow the car to fully drive itself, but rather allows its vehicles to do tasks like navigate complex intersections and be summoned in parking lots.

The new software update signifies a greater shift for the Elon Musk-led company. Tesla signaled earlier this month that it is no longer relying on radar for its Autopilot systems and is planning to shift entirely on using vision.

In a May statement, Tesla announced that "beginning with deliveries in May 2021, Model 3 and Model Y vehicles built for the North American market will no longer be equipped with radar."

"When radar and vision disagree, which one do you believe?" Musk tweeted in April. "Vision has much more precision, so better to double down on vision than do sensor fusion."

Many say, though, that ditching radar will only contribute to making Tesla vehicles less safe. Consumer Reports no longer lists the Model 3 as a Top Pick, as TechCrunch points out.

Regulators are equally unimpressed by the decision. The National Highway Traffic and Safety Administration also announced that any Model 3 and Y vehicles built after April 27 will not be receiving its checkmark for a number of driver assist features.

Read This Next
Stay Away
Tesla Is Having Extreme Trouble Hiring, for Some Reason
It Was the Tesla
Manslaughter Case Has a Strange Twist: Tesla That Killed Couple Was on Autopilot
Full Self-Delusion
Survey: 42% of Tesla Autopilot Drivers Think Their Cars Can Entirely Drive Themselves
Red Light
Godfather of Self-Driving Cars Says the Tech Is Going Nowhere
Musk Antics
Elon Musk Has a Big Problem on His Hands
More on Advanced Transport
Apple Car News
Yesterday on the byte
Apple Gives Up on Making Its Upcoming Car Fully Autonomous
Pepsi Semi
Dec 2 on the byte
Tesla Semi Truck Drives 500 Miles Fully Loaded
Out With a Bang
Nov 29 on the byte
Driver Says His Ford F-150 Lightning Made a "Loud Boom" and Died When He Plugged It In
READ MORE STORIES ABOUT / Advanced Transport
Keep up.
Subscribe to our daily newsletter to keep in touch with the subjects shaping our future.
+Social+Newsletter
TopicsAbout UsContact Us
Copyright ©, Camden Media Inc All Rights Reserved. See our User Agreement, Privacy Policy and Data Use Policy. The material on this site may not be reproduced, distributed, transmitted, cached or otherwise used, except with prior written permission of Futurism. Articles may contain affiliate links which enable us to share in the revenue of any purchases made.
Fonts by Typekit and Monotype.