This is some seriously damning evidence. 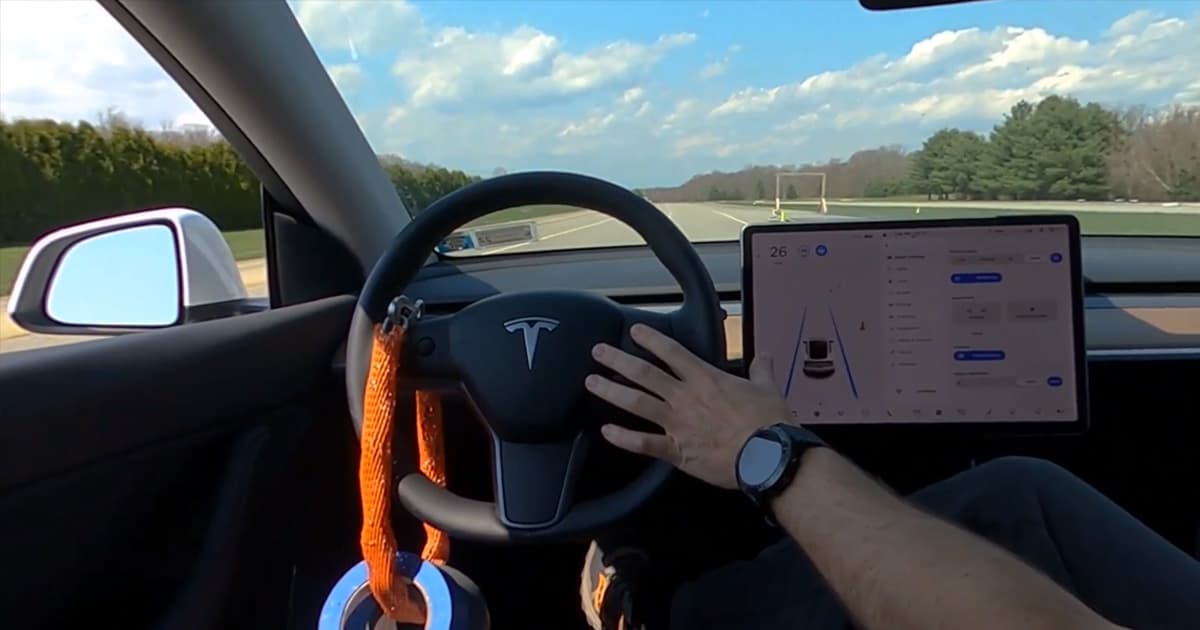 An eye-opening investigation by Consumer Reports found that a 2020 Tesla Model Y could "easily" be driven "even with no one in the driver's seat" while on a closed track, CNBC reports.

The news comes after the latest high profile Tesla crash, which left two dead this past weekend in Texas.

That crash involved a 2019 Tesla Model S — not the Model Y that was used during Consumer Reports' testing — which crashed into a tree at high speed after reportedly not making an expected turn.

Investigators found clear evidence that nobody was sitting in the driver's seat in the moments leading up to the crash. That left a huge question: were either Autopilot or Full Self-Driving, the carmaker's self-driving options, turned on at any point?

Tesla CEO Elon Musk tweeted on Monday that "Data logs recovered so far show Autopilot was not enabled and this car did not purchase [Tesla's Full Self-Driving package.]"

The National Highway Traffic Safety Administration and the National Transportation Safety Board are now investigating the incident.

While testing the Autopilot feature on a closed track, engineers at Consumer Reports found that the feature allowed them to drive down a track even with nobody in the driver's seat, just as appears to have been the case in Saturday's crash.

"In our test, the system not only failed to make sure the driver was paying attention — it couldn’t even tell if there was a driver there at all," Consumer Reports' senior director of auto testing Jake Fisher said in the report.

"Over several trips across our half-mile closed test track, our Model Y automatically steered along painted lane lines, but the system did not send out a warning or indicate in any way that the driver’s seat was empty," the engineers wrote.

All it took was to buckle the seat belt of the driver's seat, along with a small weighted chain, placed on the steering wheel, that fooled the Autopilot system into thinking the driver's hand was on the wheel.

"Autopilot makes mistakes, and when it encounters a situation that it cannot negotiate, it can immediately shut itself off," Fisher said. "If the driver isn’t ready to react quickly, it can end in a crash."

Tesla has repeatedly faced criticisms for its laissez-faire approach to advertising its self-driving tech. For instance, despite its name, the additional "Full Self-Driving" feature offered by the company (which reportedly was not purchased for the vehicle involved in Saturday's crash) doesn't actually do what the name suggests.

Other competing systems, such as General Motors' Super Cruise system, use infrared cameras to ensure the driver is looking at the road. Autopilot, however, only examines steering wheel inputs.

Fisher suggests Tesla could use existing weight sensors used for seat belt warnings and airbags to make sure somebody is actually driving the vehicle.

Worse yet, Tesla is actively using its customer base to test out the latest self-driving technologies, something Ford CEO Jim Farley used recently to rake the Musk-led company over the coals with.

"They have changed the EV market and made the idea of owning an EV far more attractive than ever before," Fisher said.

"But they seem to be using their customers as development engineers as they work on self-driving technologies, and they need to do a better job of keeping them safe," he added.

Read This Next
Netflix and Drive
Mercedes Claims to Have Achieved Level 3 Automation, Beating Tesla
Absent CEO
Tesla Investors Furious at Elon Musk for Vanishing During Crisis to Play With Shiny New Twitter
Stay Away
Tesla Is Having Extreme Trouble Hiring, for Some Reason
It Was the Tesla
Manslaughter Case Has a Strange Twist: Tesla That Killed Couple Was on Autopilot
Full Self-Delusion
Survey: 42% of Tesla Autopilot Drivers Think Their Cars Can Entirely Drive Themselves
More on Advanced Transport
Kapow
Yesterday on the byte
Self-Driving Car Plowed Into Active Fire Scene, Forcing Firefighters to Smash Its Window
Battery Trouble
Monday on the byte
Tesla "Spontaneously" Bursts Into Flames While Driving Down Freeway
High Tide
Jan 27 on the byte
We’re in Awe of Amsterdam’s Huge Underwater Bike Parking Garage
READ MORE STORIES ABOUT / Advanced Transport
Keep up.
Subscribe to our daily newsletter to keep in touch with the subjects shaping our future.
+Social+Newsletter
TopicsAbout UsContact Us
Copyright ©, Camden Media Inc All Rights Reserved. See our User Agreement, Privacy Policy and Data Use Policy. The material on this site may not be reproduced, distributed, transmitted, cached or otherwise used, except with prior written permission of Futurism. Articles may contain affiliate links which enable us to share in the revenue of any purchases made.
Fonts by Typekit and Monotype.