The new research could force us to rethink what Mars looked like billions of years ago. 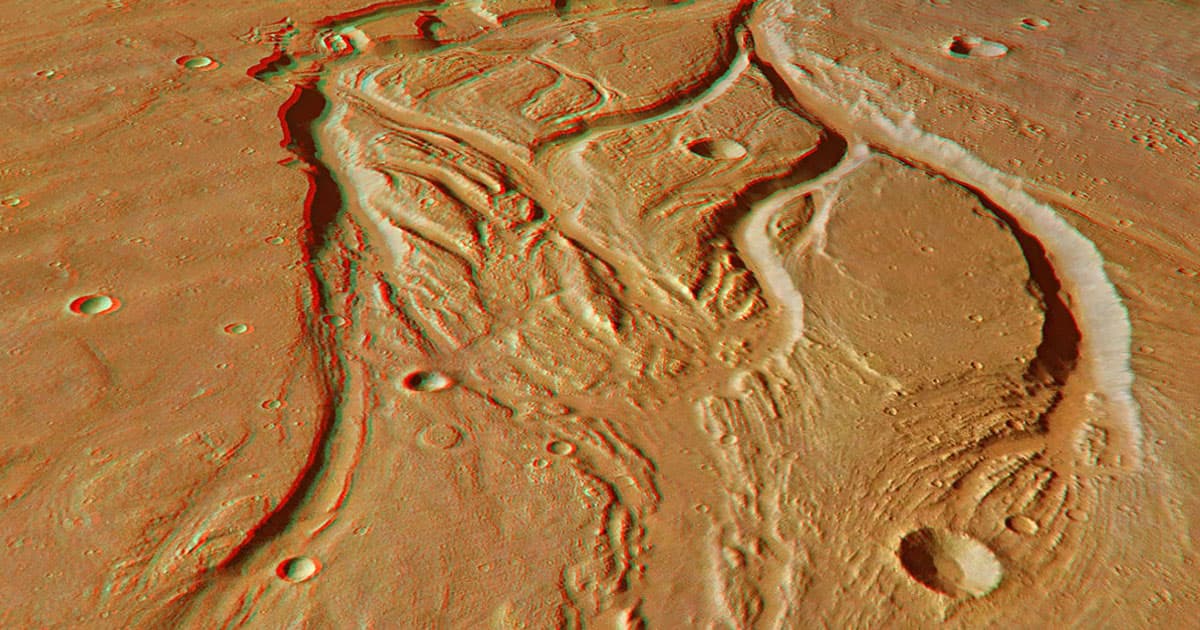 According to a new study by a group of Canadian researchers published in the journal Nature Geoscience today, a large number of ancient valleys on the Martian surface were formed by water melting below massive sheets of glacial ice — not free-flowing rivers, as previous research suggests.

The new research challenges the "warm and wet ancient Mars" hypothesis, which posits that Mars was once covered in massive river systems, fed by rain and large oceans of liquid water.

The study also follows a recent analysis of high-resolution imagery collected by the HiRISE camera on board NASA’s Mars Reconnaissance Orbiter, which concluded that large rivers likely once flowed on the surface of Mars billions of years ago.

"For the last 40 years, since Mars’s valleys were first discovered, the assumption was that rivers once flowed on Mars, eroding and originating all of these valleys," Anna Grau Galofre, former PhD student at the University of British Columbia (UBC) and lead author of the new study, said in a statement.

To come to their conclusion, Grau Galofre and her team compared over 10,000 Martian valleys to channels formed underneath glaciers of the Canadian Arctic Archipelago. To their surprise, the channels were extremely similar.

"But there are hundreds of valleys on Mars, and they look very different from each other," she added. "If you look at Earth from a satellite you see a lot of valleys: some of them made by rivers, some made by glaciers, some made by other processes, and each type has a distinctive shape."

"These results are the first evidence for extensive subglacial erosion driven by channelized meltwater drainage beneath an ancient ice sheet on Mars," co-author Mark Jellinek, professor in UBC’s department of earth, ocean and atmospheric sciences, said in the statement.

They found only a small number of channels were likely formed on the surface — a big departure from previous research.

By examining climate models of ancient Mars, they also found that the Red Planet was also likely much colder than predicted during the time that the valleys were formed.

Interestingly, a thick sheets of ice could also improve the chances of ancient life on Mars surviving. The ice would have blocked solar radiation, especially during a time when Mars had no magnetic field.

Read This Next
What Lies Beneath
Researchers Say "Conan the Bacterium" Could Be Hidden Beneath Mars’ Surface
Water Canyon
Scientists Spot Hidden Water in Mars' Grand Canyon
Martian Ammonia
NASA Rover Detects Organic Molecules on the Surface of Mars
Joseph Strikes Again
Experts Shred Paper Claiming to Identify Mushrooms on Mars
Mars Shrooms
Extremely Dubious Research Claims to Spot Fungus Growing on Mars
More on Hard Science
Horrible Geese
3:05 PM on futurism
Furious Geese Are Defeating Humans, Scientists Find
Quacks Like a Duck
Thursday on futurism
Those Headlines About Scientists Building a Wormhole Are Total Nonsense, People
It From Bit
Nov 22 on the byte
A Scientist Is Crowdfunding an Experiment to Check if We Live in a Simulation
READ MORE STORIES ABOUT / Hard Science
Keep up.
Subscribe to our daily newsletter to keep in touch with the subjects shaping our future.
+Social+Newsletter
TopicsAbout UsContact Us
Copyright ©, Camden Media Inc All Rights Reserved. See our User Agreement, Privacy Policy and Data Use Policy. The material on this site may not be reproduced, distributed, transmitted, cached or otherwise used, except with prior written permission of Futurism. Articles may contain affiliate links which enable us to share in the revenue of any purchases made.
Fonts by Typekit and Monotype.