Or at least this is the first time they're admitting it. 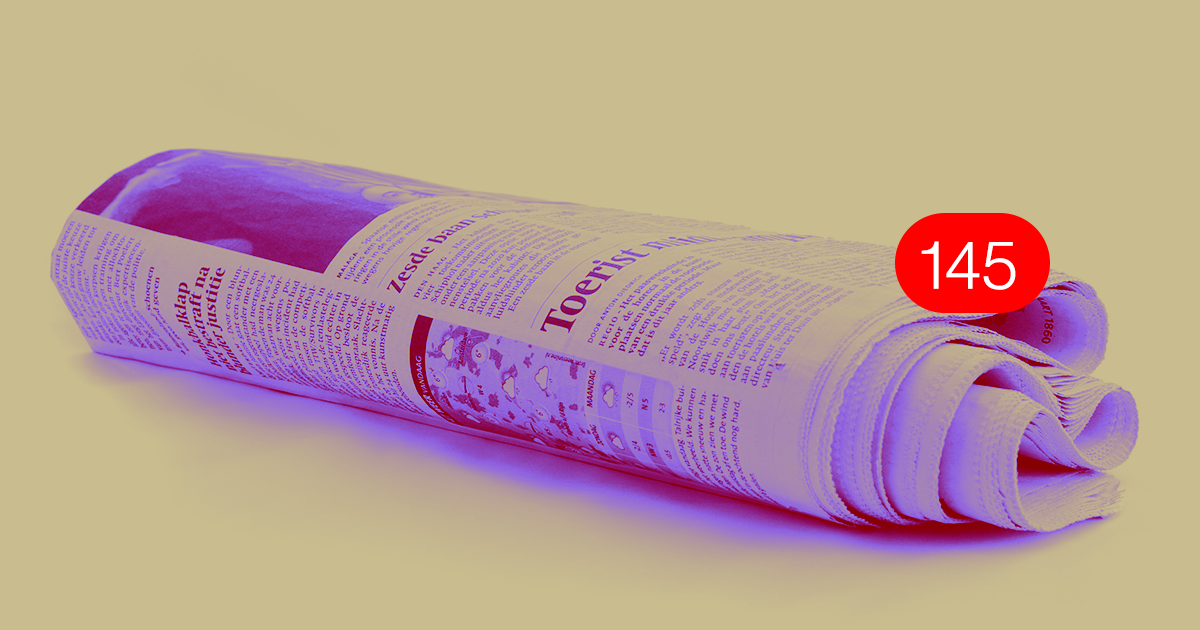 For the first time, more Americans report getting their news from social media than from a traditional print newspaper.

Now about 20 percent of Americans said they "often" go to social media for news, while about 16 percent often read a print newspaper, according to a Pew Research Center survey conducted over the first two weeks of August.

Break down the survey's 3,425 responses by age and it becomes clear that this trend is likely to increase over time — social media is the most popular source of news for people under 30 years old, with 36 percent saying they use it often and only two percent reading a physical newspaper.

Race for the Bottom

In spite of this trend, neither the newspaper nor social media are a particularly popular source of news for Americans. Television still dominates 49 percent of the market, and news websites take another 33 percent.

It's not like everyone who used to read the paper every morning suddenly decided to sign into Twitter instead — Pew's data suggest that newspaper readership has been declining steadily while social media use more or less flatlined in 2017.

But TV's reign may be short-lived: television news viewership seems to directly correlate with age — 81 percent of people over the age of 65 regularly watch TV news, as do 65 percent of people between 50 and 64 years old. Meanwhile, just 16 percent of Americans under 30 regularly watch TV news. If today's young people keep their preference for digital platforms over more traditional sources of news and that preference continues in future generations, it's possible that TV news will become much less prominent as older generations die off.

There's no way around it — social media often serves as a breeding ground for misinformation. But before you complain about those damn "kids these days," rest assured that they'll be just fine.

According to the report, younger generations get their news from a far more diverse array of sources than older generations do. They're not just signing into Twitter or Facebook and turning a blind eye to everything else out there — social media is far more prevalent among young people than it is old people, but other sources like news websites and radio news still inform a large percentage of people under thirty.

Read This Next
I Silence Thee
Leaked Messages Seem to Show Elon Musk Using Twitter to Punish His Enemies
Going Wireless
Hackers Took Over a Subdomain of Wired.com for Several Months and Replaced It With Sleazy Online Casino Content
Heating Up
Employees at TikTok Apparently Have a Secret Button That Can Make Anything Go Viral
Hardcore Mode
Even Twitter's Intern Just Resigned in Disappointment
Confrontation is Hard
Former Facebook Exec Says Zuckerberg Has Surrounded Himself With Sycophants
More on Future Society
Primate Theft
Yesterday on the byte
It Was a Very Bad Weekend for Monkeys Being Stolen From Zoos, Apparently
Ring The Alarm
Yesterday on the byte
Whistleblower Claims Facebook Can Secretly Drain Your Phone's Battery on Purpose
Gas Giant
Jan 27 on the byte
Journalist Eats Lab-Grown Chicken, Gets "Weirdly Gassy"
READ MORE STORIES ABOUT / Future Society
Keep up.
Subscribe to our daily newsletter to keep in touch with the subjects shaping our future.
+Social+Newsletter
TopicsAbout UsContact Us
Copyright ©, Camden Media Inc All Rights Reserved. See our User Agreement, Privacy Policy and Data Use Policy. The material on this site may not be reproduced, distributed, transmitted, cached or otherwise used, except with prior written permission of Futurism. Articles may contain affiliate links which enable us to share in the revenue of any purchases made.
Fonts by Typekit and Monotype.