Scientists Detect Powerful Radio Burst Coming From Our Own Galaxy 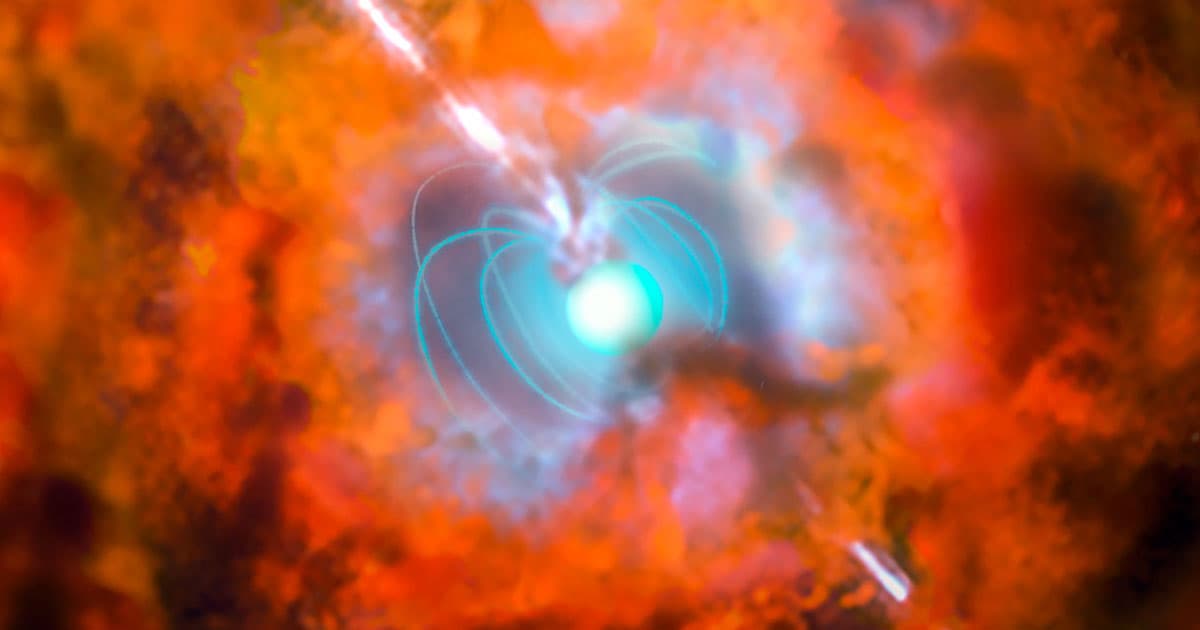 Astronomers have detected the first-ever fast radio burst (FRB) originating in our own galaxy, ScienceAlert reports.

"Something like this has never been seen before," Caltech astronomer Shrinivas Kulkarni told ScienceAlert.

The signal, a millisecond-wave bursts of radio waves, was traced back to a Milky Way magnetar, a type of neutron star with an extremely strong magnetic field. The magnetar suddenly lit up, sending out a gargantuan millisecond-long burst of bright radio waves, picked up by astronomers on April 28.

According to ScienceAlert, the blip was so intense that it could've been detectable from another galaxy.

"If the same signal came from a nearby galaxy, like one of the nearby typical FRB galaxies, it would look like an FRB to us," Kulkarni told ScienceAlert.

The detection could finally settle where the mysterious FRBs actually come from.

"This sort of, in most people's minds, settles the origin of FRBs as coming from magnetars," Kulkarni added.

Fast radio bursts have raised far more questions about the universe than they can answer. They're extremely unpredictable, despite some of them releasing more energy than 500 million suns. They don't seem to have a pattern to them and last for only a tiny fraction of a second.

Astronomers suggest the signal may have originated as a result of massive, shifting gravitational forces causing a starquake or magnetar flare, a disturbance in the magnetic field surrounding it.

The massive outburst of radio waves could also be an indication that there are plenty of other FRBs we are currently unable to detect.

"It was so bright that we saw it from the corner of our eyes, so to speak," postdoctoral fellow Shriharsh Tendulkar at McGill University told Gizmodo.

READ MORE: Exclusive: We Might Have First-Ever Detection of a Fast Radio Burst in Our Own Galaxy [ScienceAlert]

More on FRBs: POWERFUL RADIO SIGNAL FROM DISTANT GALAXY SEEMS TO HAVE A PATTERN

Read This Next
More Radio Bursts
MIT Scientists Discover Deep Space Signal, Pulsing Like Heartbeat
Ayy Lmao
Scientists Puzzled by "Spooky" Object Sending Radio Signals Every 18 Minutes From Deep Space
BUUURP
Astronomers Pinpoint Source of Mysterious Radio Burst Signal
Galactic Dance Party
Astronomers Record Signal Coming From Deep Space Every 157 Days
Futurism
Fast Radio Bursts Have a Unique Property That Can Help Us Determine Their Source
More on Hard Science
Long Live
Yesterday on futurism
Giving Baby Mice This Drug Makes Them Live 10 Percent Longer
One Person's Trash
Sep 16 on the byte
Scientists Absolutely Thrilled to Find 150 Million Year Old Vomit
Big Dark Energy
Aug 12 on the byte
Huge Empty Voids in Universe May Be Generating Dark Energy, Scientists Say
READ MORE STORIES ABOUT / Hard Science
Keep up.
Subscribe to our daily newsletter to keep in touch with the subjects shaping our future.
+Social+Newsletter
TopicsAbout UsContact Us
Copyright ©, Camden Media Inc All Rights Reserved. See our User Agreement, Privacy Policy and Data Use Policy. The material on this site may not be reproduced, distributed, transmitted, cached or otherwise used, except with prior written permission of Futurism. Articles may contain affiliate links which enable us to share in the revenue of any purchases made.
Fonts by Typekit and Monotype.