Save Hundreds With These Labor Day Deals on Samsung TVs, Laptops, Tablets, and More

Save hundreds on Samsung’s newest tech for students, commuters, and cinephiles. 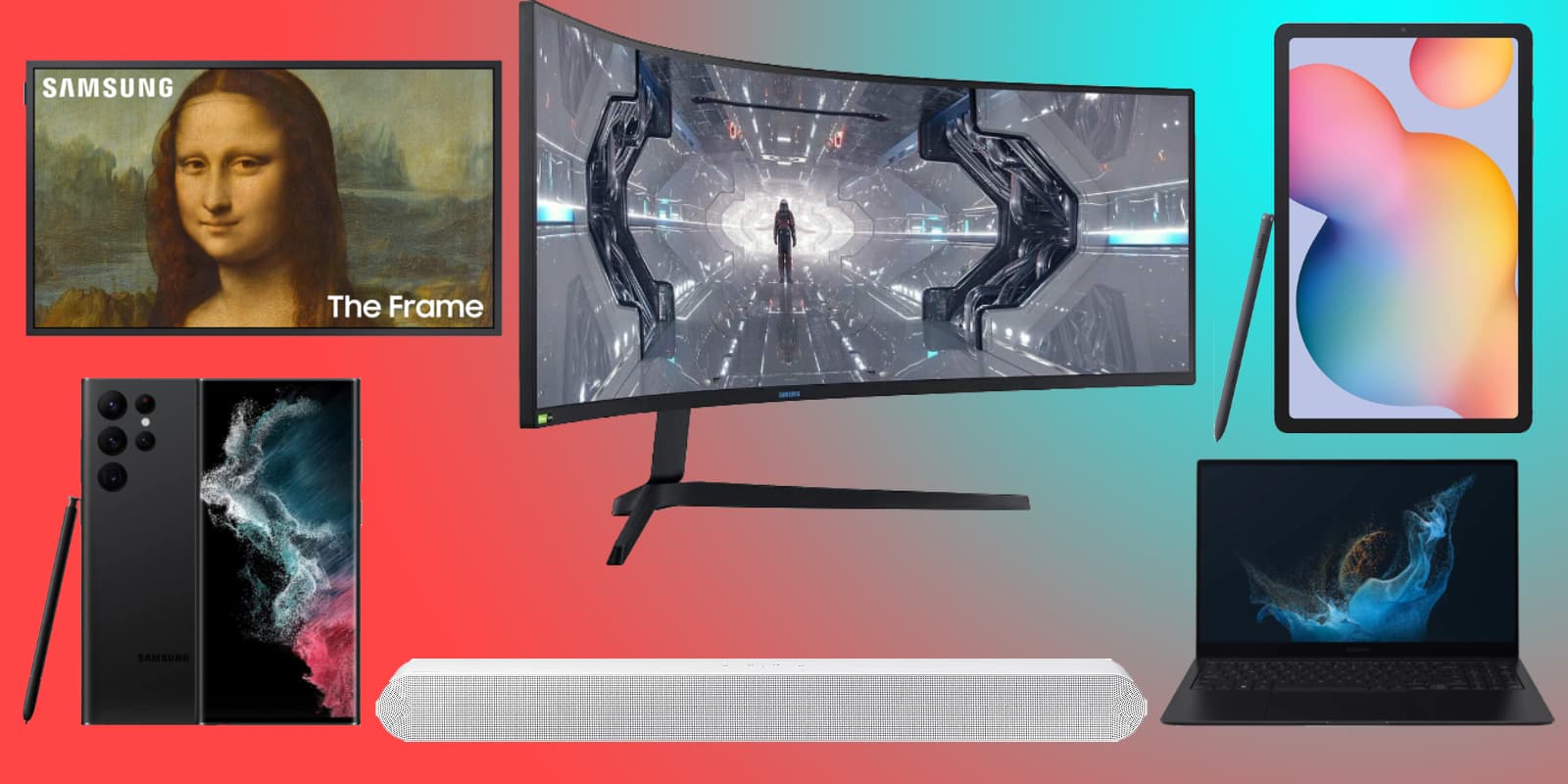 Samsung is one of the most popular consumer electronics brands in the world, and its Labor Day Weekend deals match the size of its reputation. For a limited time you’ll be able to save on the company’s latest phones, tablets, laptops, monitors, and even its newest earbuds.

There’s such a wide breadth of deals on gear that’s designed for students headed back to school, office workers commuting every day, or anyone who wants to enjoy their favorite movies and TV shows at the highest possible fidelity. These discounts on Samsung's newest gadgets probably won’t be around for very long, so shop now to avoid missing them.

The HW-S61B is a 3.0 soundbar that can wirelessly connect to the speakers in certain Samsung TVs to create a 5.0 Dolby Atmos audio system. The soundbar can also be connected to a TV from any manufacturer with an HDMI cable. One of this soundbar’s greatest strengths is its center-channel speaker, which is exclusively used for dialogue. If you have a hard time hearing people speak during TV or movie scenes with loud explosions, the HW-S61B will make sure the sound is well balanced.

You can control this soundbar with the included remote or by linking it to your Amazon Alexa account and using your voice. Voice control is especially helpful if you want to adjust the soundbar’s volume while your hands are dusty from popcorn. The main reason we love Samsung’s HW-S61B is its compact design. It’s far shorter than most soundbars, so it’ll fit in more media centers, and look appropriate regardless of your TV’s size. The HW-S61B is an excellent choice for anyone looking to improve their TV’s sound without taking up much space.

Samsung’s Galaxy Book Pro 360 lives up to its name by allowing you to fully swivel its 13.3-inch high-resolution display at any angle. This laptop is configured with an Intel Core i5 processor, 8 GB of RAM, a 256 GB SSD, and it runs Windows 11. These specs are complemented by two USB-C ports and one Thunderbolt 3 port, which will allow you to connect a lot of peripherals to the machine without any adapters. The Galaxy Book Pro 360’s namesake feature helps it stand out from the rest. You can have it positioned right above your keyboard while you’re working, then flip it around to watch videos at a comfortable angle.

This is especially useful if you’re looking for a machine that can keep you entertained on a long flight or other travel. Samsung’s Galaxy Book Pro 360 is bundled with the company’s S-Pen accessory, which allows you to use its screen as a large, digital canvas. This feature is helpful whether your career requires sketching, or you’re a college student who wants to take notes during class. Samsung says this laptop lasts up to 21 hours on a single charge thanks to its energy-efficient components. The amount of uptime you actually get will be based on your screen brightness settings and whether you’re using features like WiFi and Bluetooth. The Galaxy Book Pro 360 is a premium laptop that stands apart from Samsung’s other computers and compares favorably to Apple’s MacBook Pro.

Do you need a lot of space to get work done? If so, Samsung’s Odyssey G9 is the first, if not only, computer monitor you should consider. It’s 49 inches long, and has the same amount of pixels as two 27-inch displays stacked side by side. The G9 is a curved display, and it’ll take up all of your peripheral vision when playing games or working on massive projects. This external display makes use of Samsung’s QLED screen technology and supports HDR 1000, which means colors will look accurate and contrast (the difference between light and dark parts of the screen) will be lifelike.

If you’re a gamer, you’ll appreciate the Odyssey G9’s 240 Hz refresh rate, which will allow you to play cutting-edge titles as smoothly as possible. It also supports NVidia’s G-Sync and FreeSync Premium Pro standards, which will allow it to keep up with fast-paced action without stuttering. Samsung says the Odyssey G9 is better at keeping up with 240 Hz content than similar ones are at 144 Hz. If you’re one of the few people who has enough space on their desk for this display, and you play games, work with a lot of media, or want to be fully immersed in the digital world, this is the external monitor to get.

Samsung’s Galaxy Tab S6 Lite is one of the few tablets that can stand toe-to-toe with Apple’s iPad. The machine has a 10.4-inch high-resolution touch screen, and comes with Samsung’s S Pen, so you can start doodling, taking notes, or annotating documents right out of the box. This tablet runs Android, which means you’ll have access to thousands of free and paid apps across a wide variety of categories. Samsung says the Galaxy Tab S6 Lite runs up to one hour on a single charge — though the amount you get will depend on your brightness settings and the apps you’re running.

The Galaxy Tab S6 Lite has an eight megapixel rear-facing camera and five megapixel front-facing camera that should take reasonably good pictures in good lighting conditions. At the very least, this tablet will make you look good on a Zoom call. If you plan on getting a tablet for media, you’ll appreciate the Galaxy Tab S6 Lite’s Dolby Atmos surround-sound system, which complements its large display. If you’re a student looking for the ideal note taking gadget, a traveler who wants a distraction on their flight, or a casual user who just wants to browse the web, Samsung’s Galaxy Tab S6 Lite is the device to get.

Samsung makes the most successful Android smartphones on Earth, and its Galaxy S22 Ultra is one of its flagship models. The S22 Ultra has a 6.8-inch ultra high-resolution OLED display with a 120 Hz refresh rate. This means your photos and videos will look virtually lifelike, and games will run as smoothly as possible. This luxe screen is attached to a phone that’s 6.43 inches tall, 3.07 inches wide, and .35 inches thick. The S22 Ultra isn’t the most pocket-friendly smartphone, but Samsung used the space widely.

One of this smartphone’s biggest selling points is its incredible five-lens camera system, which includes a 108MP rear-facing camera with 100X zoom. If you can see something, you’ll be able to take a clear picture of it with this phone. This main lens is complemented by a 10-megapixel periscope telephoto lens, 10-megapixel telephoto lens, and 12-megapixel ultrawide lens. The S22 Ultra’s front-facing camera features a single 40-megapixel lens. Oh, did we fail to mention the S22 Ultra can also record 8K video?

Your phone has all of your most sensitive data on it, which is why Samsung made sure to design the Galaxy S22 Ultra with encryption in mind. Any information that’s on your phone will be protected, though you should check whether your cloud or messaging service of choice supports encryption to be totally secure. You can unlock your phone using either a passcode (make it a good one) or under-the-screen fingerprint reader.

If you haven’t already committed to getting the next iPhone, and aren’t ready to spring for a folding smartphone, the Samsung Galaxy S22 Ultra is the obvious choice.

For more great deals, check out: