Falling In
11. 15. 22 by Victor Tangermann
Falling In
/Hard Science

Objects We Thought Were Black Holes May Actually Be Wormholes, Scientists Say

"You’ll get to know the difference when you either die or you pass through." 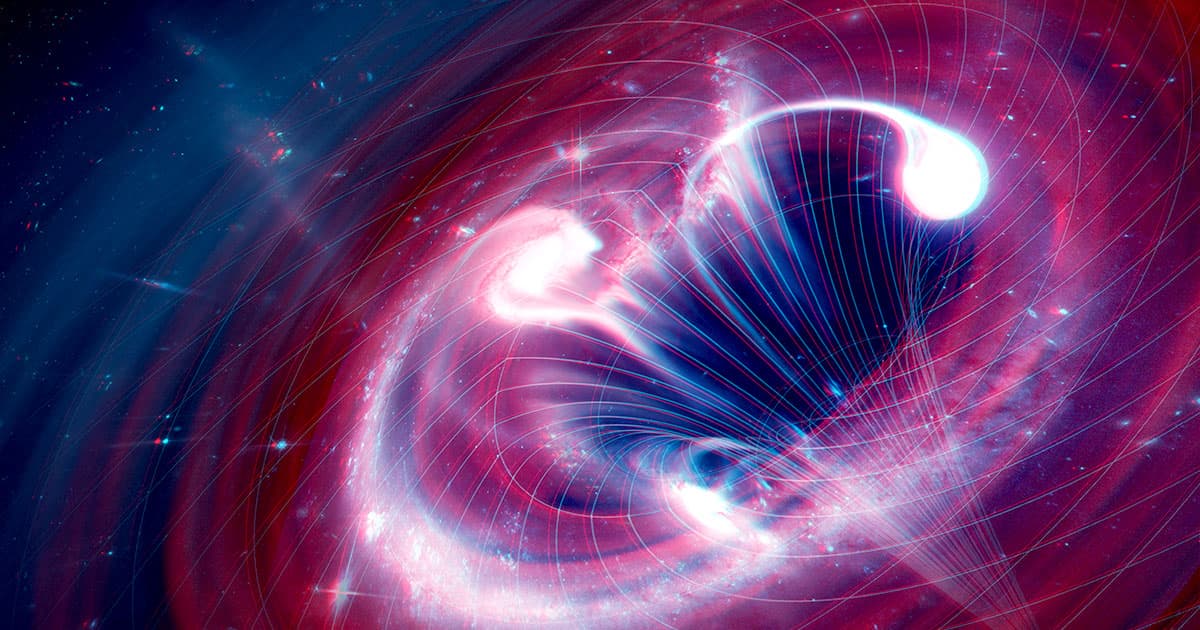 A team of physicists from Sofia University in Bulgaria say that wormholes, which are hypothetical tunnels linking one part of the universe to another, might be hiding in plain sight — in the form of black holes, New Scientist reports.

But where does all of this matter go? Physicists have long toyed with the idea that these black holes could be leading to "white holes," or wells that spew out streams of particles and radiation.

These two ends could together form a wormhole, or an Einstein-Rosen bridge to be specific, which some physicists believe could stretch any amount of time and space, a tantalizing theory that could rewrite the laws of spacetime as we understand them today.

Now, the researchers suggest that the "throat" of a wormhole could look very similar to previously discovered black holes, like the monster Sagittarius A* which is believed to be lurking at the center of our galaxy.

"Ten years ago, wormholes were completely in the area of science fiction," team lead Petya Nedkova at Sofia University told New Scientist. "Now, they are coming forward to the frontiers of science and people are actively searching."

The team's newly developed computer model, as detailed in a new paper published in the journal Physical Review D, suggests the radiation emanating from the discs of matter swirling around the edges of wormholes may be near impossible to distinguish from those surrounding a black hole.

In fact, the difference in the amount of light polarization emitted by a black hole and a wormhole, at least according to their model, would be less than four percent.

"With the current observations, you cannot distinguish a black hole or a wormhole — there may be a wormhole there, but we cannot tell the difference," Nedkova told New Scientist. "So we were looking for something else up there in the sky that could be a way to distinguish black holes from wormholes."

While Nedkova and her colleagues suggest there may be ways to distinguish between them with observations in the future. For instance, we could look for light that may be spilling in from the other end of the wormhole and emanating out of the black hole in the shape of small rings of light.

But for now, we simply don't have the technology to make those kinds of direct observations of black holes.

The only way to really tell for sure would be to scan these celestial oddities with an even higher-resolution telescope.

The other option, of course, would be to risk it all by flinging yourself into a black hole.

"If you were nearby, you would find out too late," Nedkova told the publication. "You’ll get to know the difference when you either die or you pass through."

READ MORE: How to tell the difference between a regular black hole and a wormhole [New Scientist]

More on wormholes: Astrophysicist Says We May Have Already Observed Wormholes Created by Alien Civilization

Read This Next
Quacks Like a Duck
Those Headlines About Scientists Building a Wormhole Are Total Nonsense, People
Black Hole Snapshot
Scientists Release Image of Black Hole at Center of Our Galaxy
Sucking Atmospheres
Scientists Spot Ravenous "Vampire" Star Devouring Its Neighbor
Yuge
Scientists Discover Enormous Black Hole Right Near Our Galaxy
EHT Tu, Black Hole
Astronomers Release Stunning New Image of Black Hole
More on Hard Science
Tractor Beam
Thursday on the byte
Scientists Build Working Tractor Beam, Although It's Comically Tiny
Having a Blast
Jan 18 on the byte
New Study Shows Where You Should Hide to Survive a Nuclear Attack
Offworld Amino
Jan 15 on the byte
Scientists Find Building Blocks of Life in Meteor That Smashed Into Family's Driveway
READ MORE STORIES ABOUT / Hard Science
Keep up.
Subscribe to our daily newsletter to keep in touch with the subjects shaping our future.
+Social+Newsletter
TopicsAbout UsContact Us
Copyright ©, Camden Media Inc All Rights Reserved. See our User Agreement, Privacy Policy and Data Use Policy. The material on this site may not be reproduced, distributed, transmitted, cached or otherwise used, except with prior written permission of Futurism. Articles may contain affiliate links which enable us to share in the revenue of any purchases made.
Fonts by Typekit and Monotype.