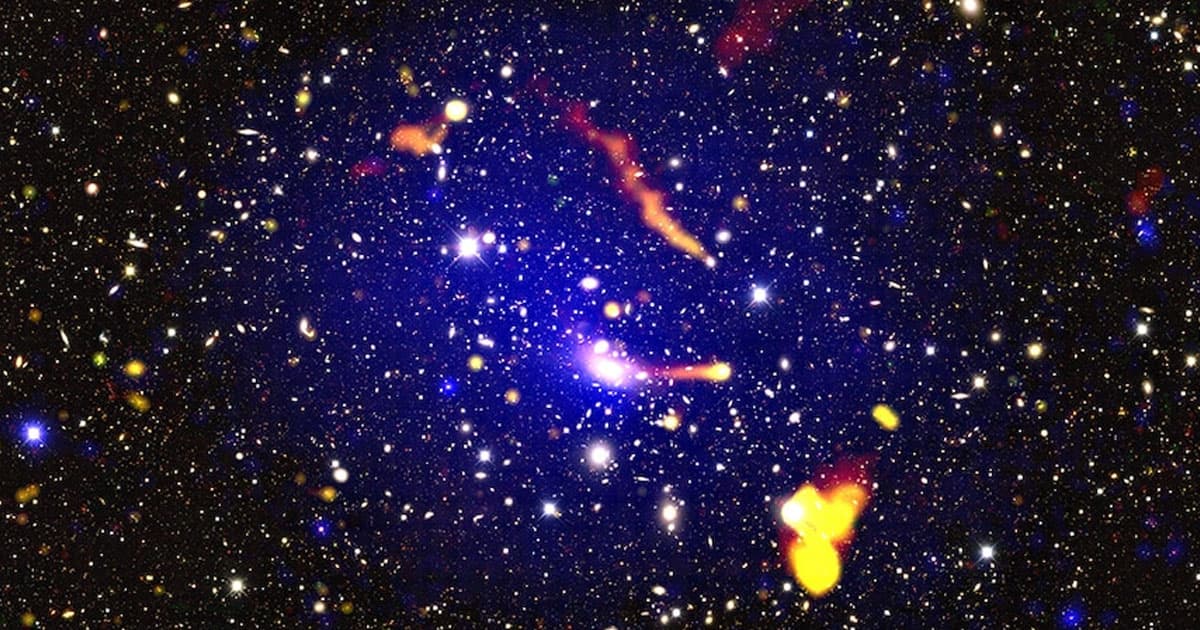 This is really out there.

This is really out there.

New observations of a far-flung galaxy cluster have left a group of scientists stumped as they ponder whether they've discovered a new form of physics.

In their new paper, researchers Tessa Vernstrom of The University of Western Australia and Christopher Reisely from Italy's Università di Bologna describe how their discovery of a series of large, low frequency radio wave-emitting objects in a galaxy cluster about 800 million light-years away appear to defy the laws of physics.

These kinds of objects are relatively rare, the researchers noted, but not entirely unheard of.

These three objects were all too faint to detect until the researchers applied a complicated algorithm to the telescope imagery of the galaxy cluster — and in doing so, found the ancient remnants of a supermassive black hole that created the galaxy cluster.

Abell 3266's radio relic in particular caught the researchers' attention, a sonic boom-like arc of radio waves that are "powered by shockwaves [traveling] through the plasma," as the they noted in a piece for The Conversation.

This relic is unlike any radio object scientists have ever seen before, according to the team, due to its highly unusual concave shape, earning it its "wrong-way relic" nickname.

"If it's a shock wave, you might think it would bend down like an arc around the edge," Vernstrom told ABC Australia, "but this one is flipped around."

The researchers are now faced with a puzzle.

"Our best physical models simply can’t fit the data," the researchers wrote in The Conversation. "This reveals gaps in our understanding of how these sources evolve – gaps that we’re working to fill."

That means the team has to go back to the drawing board.

"Maybe there's some kind of new physics going on there that we haven't fully understood," Vernstrom concluded, "when our models can't match the observations."

More on radio waves: Scientists Baffled By Radio Waves Coming From Our Own Galaxy