Scientists Puzzled by Weird "Strands" at the Center of Our Galaxy

There are almost 1,000 of them — and we have no idea what they are made of and where they came from. 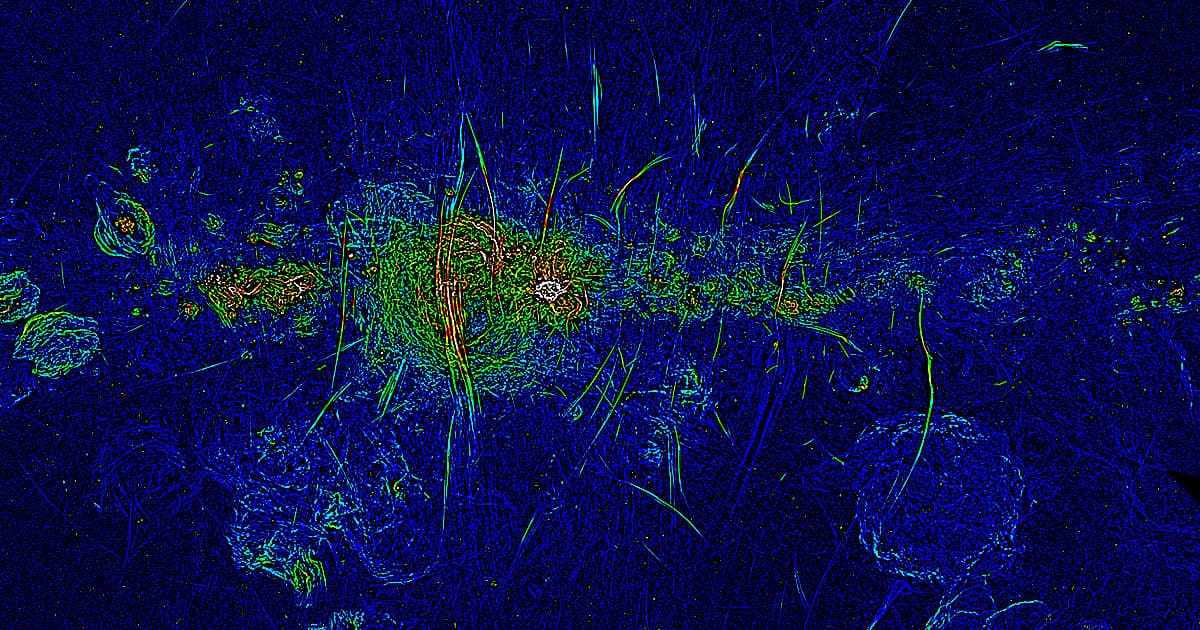 Over the last 35 years, Northwestern University astronomy professor Farhad Yusef-Zadeh has been studying mysterious strands made up of cosmic ray electrons stretching up to 150 light years across the center of the Milky Way.

And now, with he help of his team, Yusef-Zadeh was able to find ten times more strands than previously discovered — which is striking, since we still have no idea what they are made of, nevermind where they came from.

Using the South African Radio Astronomy Observatory MeerKAT telescope, the team was able to get a panoramic view of almost 1,000 of these mysterious filaments, as detailed in a new study accepted into The Astrophysical Journal Letters.

"We have studied individual filaments for a long time with a myopic view," Yusef-Zadeh said in a statement. "Now, we finally see the big picture — a panoramic view filled with an abundance of filaments."

Needless to say, it's a significant moment in his career-long investigation.

"Just examining a few filaments makes it difficult to draw any real conclusion about what they are and where they came from," he added. "This is a watershed in furthering our understanding of these structures."

To create the panorama, the team stitched together 20 separate observations made over 200 hours by the MeerKAT observatory. The resulting image is awe-inspiring, and "like modern art," according to Yusef-Zadeh.

Despite the advancements and an abundance of questions left to answer, the team is willing to make some educated guesses.

The variation in the radiation emitted by the filaments for instance suggest they aren't the leftovers of supernovae, but rather the result of past activity of the supermassive black hole suspected to be at the center of our galaxy.

"This is the first time we have been able to study statistical characteristics of the filaments," Yusef-Zadeh said in the statement. For instance, the team discovered that magnetic fields are being amplified along the strands.

They are also spaced apart from each other at exactly the same distances.

"We still don't know why they come in clusters or understand how they separate, and we don't know how these regular spacings happen," Yusef-Zadeh said.

But getting a full understanding will require "more observations and theoretical analyses," he said, a process that "takes time."

"Every time we answer one question, multiple other questions arise," he added.

More on the Milky Way: Scientists Surprised by Mysterious Barrier at the Core of our Galaxy

Read This Next
Black Hole Snapshot
Scientists Release Image of Black Hole at Center of Our Galaxy
Shooting Blanks
Astronomers Detect "Bullets" of Gas Shooting Out of Our Galactic Center
Really Really Really Old
Astronomers Puzzled By Ancient Milky Way-Like Galaxy 12 Billion Light-Years Away
Wanna Feel Small in the Universe?
Astronomers: Something Is Warping Our Entire Galaxy
Smol Black Holes
Scientists Discover New Class of Tiny Black Holes
More on Hard Science
Tractor Beam
Jan 26 on the byte
Scientists Build Working Tractor Beam, Although It's Comically Tiny
Having a Blast
Jan 18 on the byte
New Study Shows Where You Should Hide to Survive a Nuclear Attack
Offworld Amino
Jan 15 on the byte
Scientists Find Building Blocks of Life in Meteor That Smashed Into Family's Driveway
READ MORE STORIES ABOUT / Hard Science
Keep up.
Subscribe to our daily newsletter to keep in touch with the subjects shaping our future.
+Social+Newsletter
TopicsAbout UsContact Us
Copyright ©, Camden Media Inc All Rights Reserved. See our User Agreement, Privacy Policy and Data Use Policy. The material on this site may not be reproduced, distributed, transmitted, cached or otherwise used, except with prior written permission of Futurism. Articles may contain affiliate links which enable us to share in the revenue of any purchases made.
Fonts by Typekit and Monotype.