Astronomers Detect "Bullets" of Gas Shooting Out of Our Galactic Center

They have no idea what's behind it. 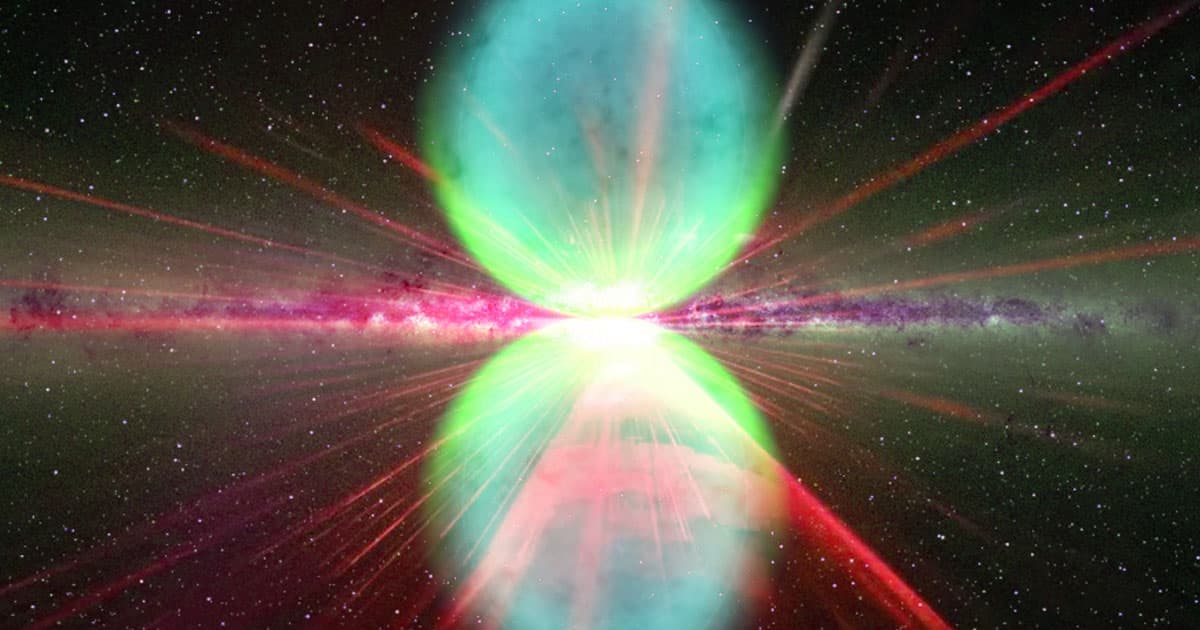 Two giant blobs made up of a swirling complex of gases and cosmic rays sit centered above and below the plane of the Milky Way.

These two "Fermi bubbles," first spotted a decade ago, are clustered relatively close to the supermassive black hole lurking at the center of our galaxy called Sagittarius A*, a highly turbulent and energetic area of our galaxy.

Now, astronomers have observed that these two bubbles are spitting out clusters of cold molecular gas "like bullets," according to new research. And they have no idea how.

"Galaxies can be really good at shooting themselves in the foot," Naomi McClure-Griffiths from The Australian National University, co-author of a paper about the research published in Nature on Wednesday, said in a statement. "When you drive out a lot of mass, you're losing some of the material that could be used to form stars, and if you lose enough of it, the galaxy can't form stars at all anymore."

"So, to be able to see hints of the Milky Way losing this star forming gas is kind of exciting — it makes you wonder what's going to happen next!" she added.

The team used the Atacama Pathfinder Experiment, a 12-meter telescope scanning for infrared and radio waves, at the European Southern Observatory (ESO) in Chile for their research.

McClure-Griffiths and her team are still puzzled as to what may be causing the unusual effect or if Sagittarius A* has anything to do with it.

"We don't know how either the black hole or the star formation can produce this phenomenon," lead author Enrico Di Teodoro from Johns Hopkins University said.

While the effect has been observed in other galaxies, our galaxy isn't spewing out new stars at nearly the same rate.

"With external galaxies you get much more massive black holes, star formation activity is higher, it makes it easier for the galaxy to expel material," Di Teodoro said.

There are two possible explanations, neither of which the team is willing to fully subscribe to: either a burst of star formation produced several supernovae and generated strong winds — or Sagittarius A* accreted matter and launched it out of two jets from either poles.

For now, the true cause is still a mystery.

"We're still looking for the smoking gun, but it gets more complicated the more we learn about it," Di Teodoro added.

READ MORE: Mystery Gas Has Been Detected Shooting 'Like Bullets' From Our Galactic Centre [Science Alert]

More on space bullets: A “Dense Bullet of Something” Blasted Holes in the Milky Way

Read This Next
Black Hole Snapshot
Scientists Release Image of Black Hole at Center of Our Galaxy
The Last Strand
Scientists Puzzled by Weird "Strands" at the Center of Our Galaxy
Kill It With Fire
Astronomers Find Five Dozen Baby Black Holes in Distant Psychotic Chaos Galaxy
Pac Man Black Hole
A Black Hole Bites a Chunk Out of This Star Every 114 Days
Hol Up
A Supermassive Black Hole Is Missing, NASA Says
More on Hard Science
Quacks Like a Duck
Thursday on futurism
Those Headlines About Scientists Building a Wormhole Are Total Nonsense, People
It From Bit
Nov 22 on the byte
A Scientist Is Crowdfunding an Experiment to Check if We Live in a Simulation
Water Carrying
Nov 20 on the byte
Evidence Grows That Soggy Meteorites Gave Earth Its Oceans
READ MORE STORIES ABOUT / Hard Science
Keep up.
Subscribe to our daily newsletter to keep in touch with the subjects shaping our future.
+Social+Newsletter
TopicsAbout UsContact Us
Copyright ©, Camden Media Inc All Rights Reserved. See our User Agreement, Privacy Policy and Data Use Policy. The material on this site may not be reproduced, distributed, transmitted, cached or otherwise used, except with prior written permission of Futurism. Articles may contain affiliate links which enable us to share in the revenue of any purchases made.
Fonts by Typekit and Monotype.