Look on the bright side — at least this isn't happening to our Sun. 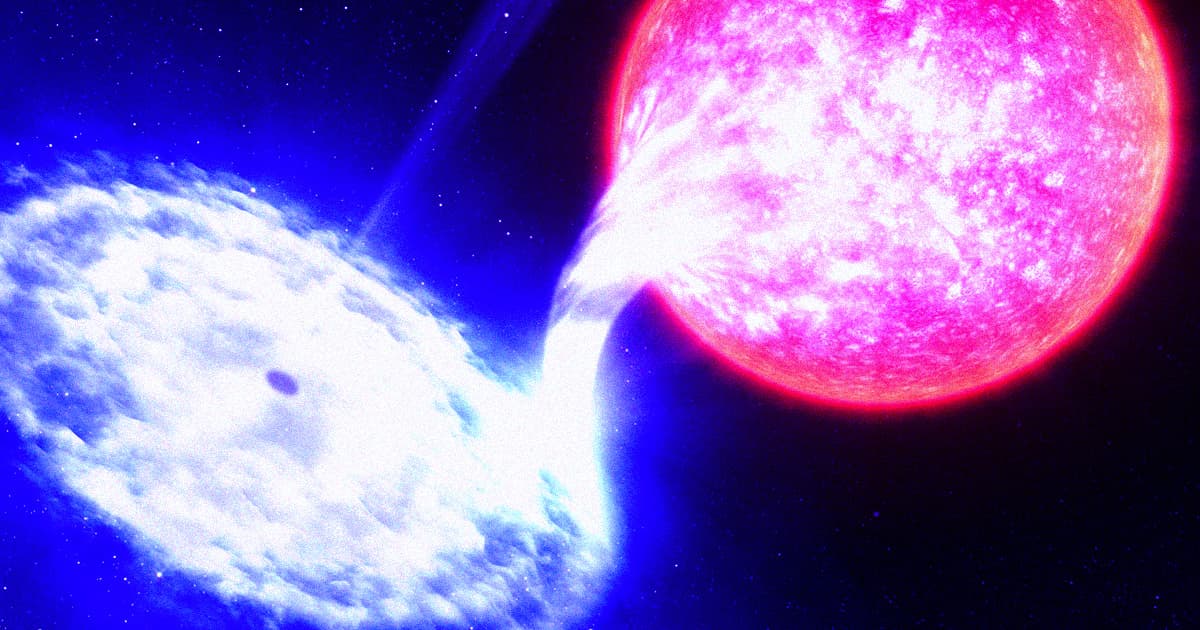 An international team of astronomers have detected a violent eruption of light emanating from a galaxy some 570 million light years away that repeats itself like clockwork every 114 Earth days.

The explanation? They believe the repeating flares are caused by a supermassive black hole, about 20 times the mass of the one at the center of our own Milky Way, ripping a chunk out of an orbiting star whenever it gets too close.

The discovery was made using NASA data and a network of telescopes operated by The Ohio State University.

"It’s really exciting, because we’ve seen black holes do a lot of things, but we’ve never seen them do something like this — cause this regular eruption of light — before," said Patrick Vallely, Ohio State graduate student and co-author of a study about the discovery due to be published in The Astrophysical Journal, in a statement.

"It’s like an extra-galactic Old Faithful," he added, referring to the famous geyser in Yellowstone National park that erupts almost exactly on schedule.

The star approaches the black hole on a highly elliptical orbit, losing about three times the mass of Jupiter every time it gets too close, causing a huge flare visible from Earth.

Usually such events completely destroy a star, meaning the discovery is extremely exotic.

The team was also able to spot 17 flares each spaced 114 days apart, a regularity and consistency that has never been observed before.

"Knowing the schedule of this extragalactic Old Faithful allows us to coordinate and study it in more detail," Anna Payne, lead author of the paper and a NASA Fellow at the University of Hawaii, said in the statement. The team was able to accurately predict a flare on both September 6 and December 26.

The researchers also found evidence of a second supermassive black hole within the same galaxy, suggesting that two galaxies are in the process of merging, one of the most violent types of interaction in the known universe.

"In general, we really want to understand the properties of these black holes and how they grow," Kris Stanek, a co-author and professor of astronomy at Ohio State, said in the statement.

Thanks to the flares' predictability, the scientists are hoping to glean insights into the phenomenon.

"The ability to exactly predict the timing of the next episode allows us to take data that we could not otherwise take, and we are taking such data already," Stanek said.

Read This Next
Falling In
Objects We Thought Were Black Holes May Actually Be Wormholes, Scientists Say
Black Hole Snapshot
Scientists Release Image of Black Hole at Center of Our Galaxy
Sucking Atmospheres
Scientists Spot Ravenous "Vampire" Star Devouring Its Neighbor
Yuge
Scientists Discover Enormous Black Hole Right Near Our Galaxy
EHT Tu, Black Hole
Astronomers Release Stunning New Image of Black Hole
More on Hard Science
Tractor Beam
Jan 26 on the byte
Scientists Build Working Tractor Beam, Although It's Comically Tiny
Having a Blast
Jan 18 on the byte
New Study Shows Where You Should Hide to Survive a Nuclear Attack
Offworld Amino
Jan 15 on the byte
Scientists Find Building Blocks of Life in Meteor That Smashed Into Family's Driveway
READ MORE STORIES ABOUT / Hard Science
Keep up.
Subscribe to our daily newsletter to keep in touch with the subjects shaping our future.
+Social+Newsletter
TopicsAbout UsContact Us
Copyright ©, Camden Media Inc All Rights Reserved. See our User Agreement, Privacy Policy and Data Use Policy. The material on this site may not be reproduced, distributed, transmitted, cached or otherwise used, except with prior written permission of Futurism. Articles may contain affiliate links which enable us to share in the revenue of any purchases made.
Fonts by Typekit and Monotype.