This star was really out for blood. 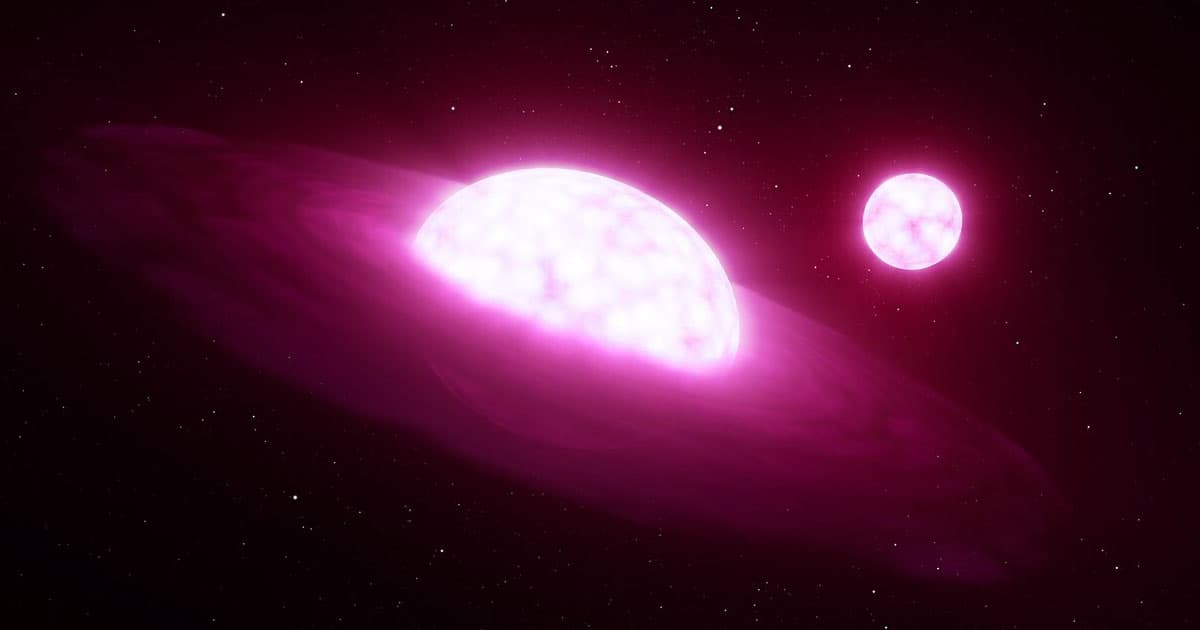 Astronomers have witnessed a gloomy event: a "vampire" star sucking the life out of its companion star.

Using the European Southern Observatory's Very Large Telescope (VLT) in Chile, an international team of astronomy researchers watched a star in the system dubbed HR 6819, some 1,000 light-years from Earth, strip its companion star of its outer layers.

Up until now, astronomers had suggested that the system was made up of a star and an accompanying black hole, with the first peacefully orbiting the latter every 40 days.

In fact, back in 2020, astronomers made a big deal out of the announcement, claiming that the black hole was the closest one of its kind to Earth.

But something felt off about the theory.

"The scenarios we were looking for were rather clear, very different and easily distinguishable with the right instrument," said team lead Thomas Rivinius, Chile-based ESO astronomer and coauthor of a new paper published in the journal Astronomy & Astrophysics, in a statement.

"We agreed that there were two sources of light in the system, so the question was whether they orbit each other closely, as in the stripped-star scenario, or are far apart from each other, as in the black hole scenario," he added.

The results of the investigation spoke for themselves. One of the VLT's instruments "confirmed that there was no bright companion in a wider orbit," while another "was was able to resolve two bright sources separated by only one-third of the distance between the Earth and the Sun," said KU Leuven researcher Abigail Frost, lead author of the study, in the statement.

"These data proved to be the final piece of the puzzle, and allowed us to conclude that HR 6819 is a binary system with no black hole," Frost concluded.

The reasoning is rather gruesome.

"Our best interpretation so far is that we caught this binary system in a moment shortly after one of the stars had sucked the atmosphere off its companion star," said Julia Bodensteiner, KU Leuven researcher and coauthor, in the statement.

In other words, one of the stars was a "vampire" stripping its companion of its material.

The study could lead to more breakthroughs in our understanding of how this "stellar vampirism" phenomenon works.

"Catching such a post-interaction phase is extremely difficult as it is so short," Frost said, arguing the HR 6819 system "presents a perfect candidate to study how this vampirism affects the evolution of massive stars."

Read This Next
Falling In
Objects We Thought Were Black Holes May Actually Be Wormholes, Scientists Say
Black Hole Snapshot
Scientists Release Image of Black Hole at Center of Our Galaxy
Yuge
Scientists Discover Enormous Black Hole Right Near Our Galaxy
EHT Tu, Black Hole
Astronomers Release Stunning New Image of Black Hole
Kill It With Fire
Astronomers Find Five Dozen Baby Black Holes in Distant Psychotic Chaos Galaxy
More on Hard Science
Warped Tour
Yesterday on futurism
Professor Believes Door to Warp Drive May Lie With Ethylene Glycol
Sky Bursts
Yesterday on the byte
Astronomers Intrigued by 25 Mysterious Repeating Radio Signals From Deep Space
Tractor Beam
Jan 26 on the byte
Scientists Build Working Tractor Beam, Although It's Comically Tiny
READ MORE STORIES ABOUT / Hard Science
Keep up.
Subscribe to our daily newsletter to keep in touch with the subjects shaping our future.
+Social+Newsletter
TopicsAbout UsContact Us
Copyright ©, Camden Media Inc All Rights Reserved. See our User Agreement, Privacy Policy and Data Use Policy. The material on this site may not be reproduced, distributed, transmitted, cached or otherwise used, except with prior written permission of Futurism. Articles may contain affiliate links which enable us to share in the revenue of any purchases made.
Fonts by Typekit and Monotype.