Scientists Say the Universe Itself May Be "Pixelated"

What is gravity itself actually made of? 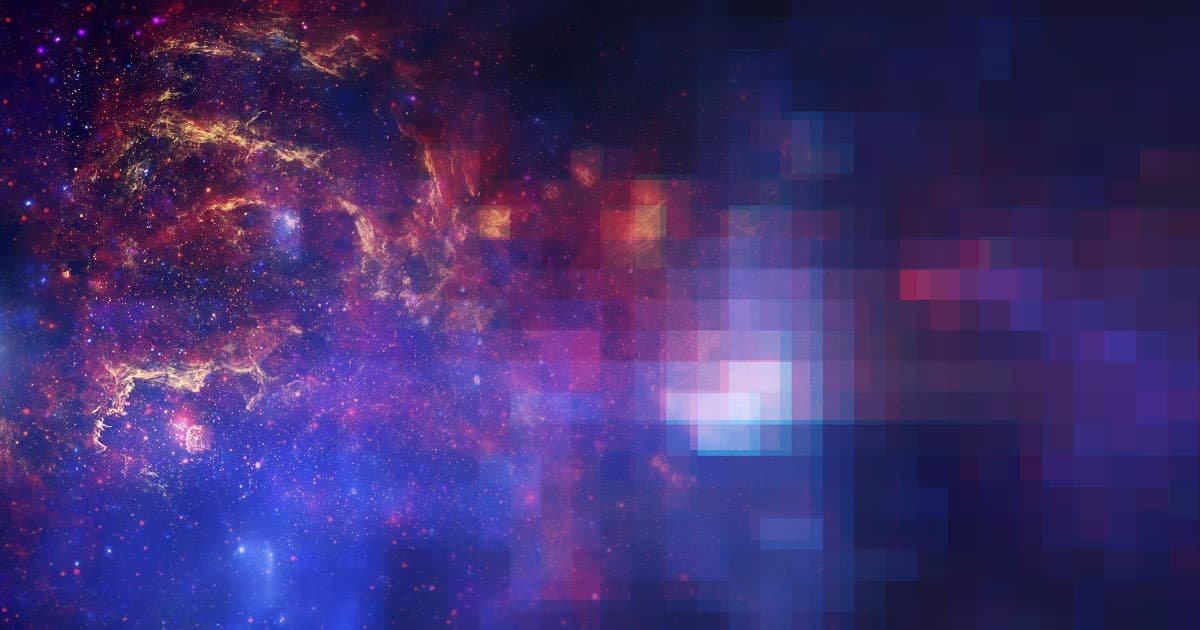 Here's a brain teaser for you: scientists are suggesting spacetime may be made out of individual "spacetime pixels," instead of being smooth and continuous like it seems.

Rana Adhikari, a professor of physics at Caltech, suggested in a new press blurb that these pixels would be "so small that if you were to enlarge things so that it becomes the size of a grain of sand, then atoms would be as large as galaxies."

Adhikari's goal is to reconcile the conventional laws of physics, as determined by general relativity, with the more mysterious world of quantum physics.

It's a seriously mind-bending theory that attempts to explain whether gravity can actually be split up into its individual components, a question that has been keeping quantum physicists up at night for a long time.

"Sometimes there is a misinterpretation in science communication that implies quantum mechanics and gravity are irreconcilable," said Cliff Cheung, a Caltech professor of theoretical physics who's working with Adhikari, in the statement. "But we know from experiments that we can do quantum mechanics on this planet, which has gravity, so clearly they are consistent."

The devil, as always, is in the detail.

"The problems come up when you ask subtle questions about black holes or try to merge the theories at very short distance scales," Cheung added.

In other words, if you were to zoom in on spacetime, would you also find individual photons, which make up light, according to the laws of quantum mechanics? Or would it be a continuous spectrum?

Some scientists suggest individual hypothetical "gravitons" could make up gravity on the smallest scale. Gravitons are a component of string theory that would resonate at a particular frequency.

But on an even smaller scale than that, scientists are still scratching their heads as to how to unify the laws of general relativity and quantum physics.

"If I drop my coffee mug and it falls, I’d like to think that’s gravity," Adhikari quipped. "But, in the same way that temperature is not ‘real’ but describes how a bunch of molecules are vibrating, spacetime might not be a real thing."

The same may go for spacetime.

"It may be that something that arises out of the pixelation of spacetime has just been given the name gravity because we don’t yet understand what the guts of spacetime are," he added.

More on quantum physics: Scientist Claims That Aliens May Be Communicating via Starlight

Read This Next
Heady Stuff
Experiment Suggests That Consciousness May Be Rooted in Quantum Physics
Big Yikes
Turns Out Schrödinger, the Father of Quantum Physics, Was a Pedophile
Futurism
A Breakthrough: Actual Video of a Time Crystal
Multidimensional Cats
This Physicist Believes There Are Countless Parallel Universes
Paradox Lost
Scientists Predict Quantum Jumps, Turning Physics on Its Head
More on Hard Science
Good God
Yesterday on the byte
Huge Cloud of Toxic Yellow Gas Kills 13
zombie star
Yesterday on futurism
Scientists Puzzled by Star That Exploded in Supernova But Somehow Survived
Life on Mars
Jun 21 on the byte
Physicist Says There's a Small Chance You'll Wake Up on Mars Tomorrow Due to Quantum Physics
READ MORE STORIES ABOUT / Hard Science
Keep up.
Subscribe to our daily newsletter to keep in touch with the subjects shaping our future.
+Social+Newsletter
TopicsAbout UsContact Us
Copyright ©, Camden Media Inc All Rights Reserved. See our User Agreement, Privacy Policy and Data Use Policy. The material on this site may not be reproduced, distributed, transmitted, cached or otherwise used, except with prior written permission of Futurism. Fonts by Typekit and Monotype.