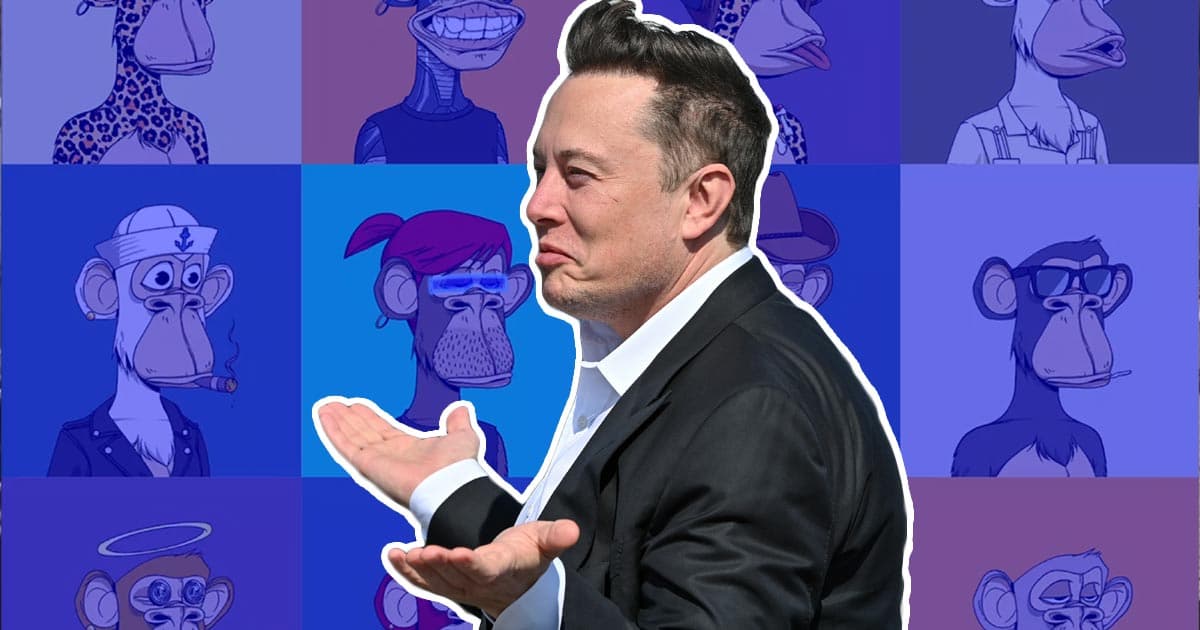 In spite of being a fan of Dogecoin, SpaceX and Tesla CEO Elon Musk is a noted hater of NFTs.

And now a characteristically cryptic Musk has changed his profile picture to what appears to be a stolen collage of Bored Ape NFTs, inviting drama with the infamously irascible NFT community.

"I dunno... seems kinda fungible," Musk tweeted, in an apparent mockery of the tech.

The image appears to have originated as a promotional asset for a sale at the famed auction house Sotheby's by Bored Apes creator Yuga Labs.

Unsurprisingly, Sotheby's doesn't seem happy either, with its digital art specialist Michael Bouhanna tweeting at Musk that "as much I admire your work I’d like you to remove your [profile picture] that I created for our Sotheby’s sale."

"Or you credit me," Bouhanna suggested. "Happy to send you the original file minted with the buyer approval."

"He is just trolling the NFT community," wrote one fan. "Bored for sure."

Musk has long been a foe of NFTs. In December, he mocked the tokens as a sign of mental illness, posting a meme  showing a patient lying on a therapist’s couch. "These ‘NFTs’ — are they in the room with us right now?" a caption above the therapist reads.

"This is annoying," he tweeted at the time. "Twitter is spending engineering resources on this bs while crypto scammers are throwing a spambot block party in every thread!?"

The picture has, of course, changed significantly since then, with Twitter's leadership tentatively agreeing to sell the site to Musk.

That's doubly interesting because Musk has voiced concerns over crypto scams on Twitter on several occasions during the sale proceedings, vowing to put an end to them once and for all. NFTs have been a growing scam magnet in the crypto space, with millions of dollars worth of NFTs being stolen on an almost weekly basis.

Ironically, though, his renewed interest could represent a coup for the NFT, the sales of which have flatlined lately after hitting record highs late last year, The Wall Street Journal reported this week.

In fact, ApeCoin, the token created by Bored Ape creators Yuga Labs, soared 19 percent just an hour after Musk changed his profile picture, according to CNBC.

As we've seen on many occasions in the past, all it takes is a cryptic tweet sent out by Elon Musk.

More on NFTs: Hackers Reportedly Get Away With $13.7 Million Worth of Bored Ape NFTs

Read This Next
Cracking Eggs
Logan Paul Says His NFT Game Isn't a Scam, He Just Hired Scammers to Build It and They Did Some Scamming
Sad!
Donald Trump's NFT Collection Is So Fantastically Ugly That Even His Biggest Fans Are Aghast
Old School
FTX's New CEO Says Company Did "Old Fashioned Embezzlement"
Tulip Fever
Dutch Startup Mining Bitcoin to Grow Tulips, and We Can't Tell If They're Joking
Moving Money
Crypto.com Accidentally Sent $400 Million to a Competitor
More on Blocknik
Hi Haters
Jan 20 on the byte
Owner of Infamous Davos Bitcoin Car Gets Sensitive Over Crypto Criticism
Davos Daggers
Jan 19 on the byte
Influential Economist Tells Davos Elites That Crypto Is a Complete Scam
Ruh Roh
Jan 19 on the byte
Sam Bankman-Fried’s Parents Reportedly Got Him a Dog So He Wouldn’t Be So Lonely
READ MORE STORIES ABOUT / Blocknik
Keep up.
Subscribe to our daily newsletter to keep in touch with the subjects shaping our future.
+Social+Newsletter
TopicsAbout UsContact Us
Copyright ©, Camden Media Inc All Rights Reserved. See our User Agreement, Privacy Policy and Data Use Policy. The material on this site may not be reproduced, distributed, transmitted, cached or otherwise used, except with prior written permission of Futurism. Articles may contain affiliate links which enable us to share in the revenue of any purchases made.
Fonts by Typekit and Monotype.