This could revolutionize our search for life on other worlds.

Scientists currently hold two different assumptions regarding the origins of life on Earth. The first and more popular one assumes life began under Earth’s ancient oceans, in deep sea hydrothermal vents. The second suggests that life originated on land. Now, scientists from the University of New South Wales (UNSW) have uncovered fossil evidence that supports the second assumption and pushes back — way back —the earliest known existence of life in hot springs.

“Our exciting findings don’t just extend back the record of life living in hot springs by 3 billion years, they indicate that life was inhabiting the land much earlier than previously thought, by up to about 580 million years,” Tara Djokic, first author of the study, which is published in Nature Communications, explained in a UNSW press release. 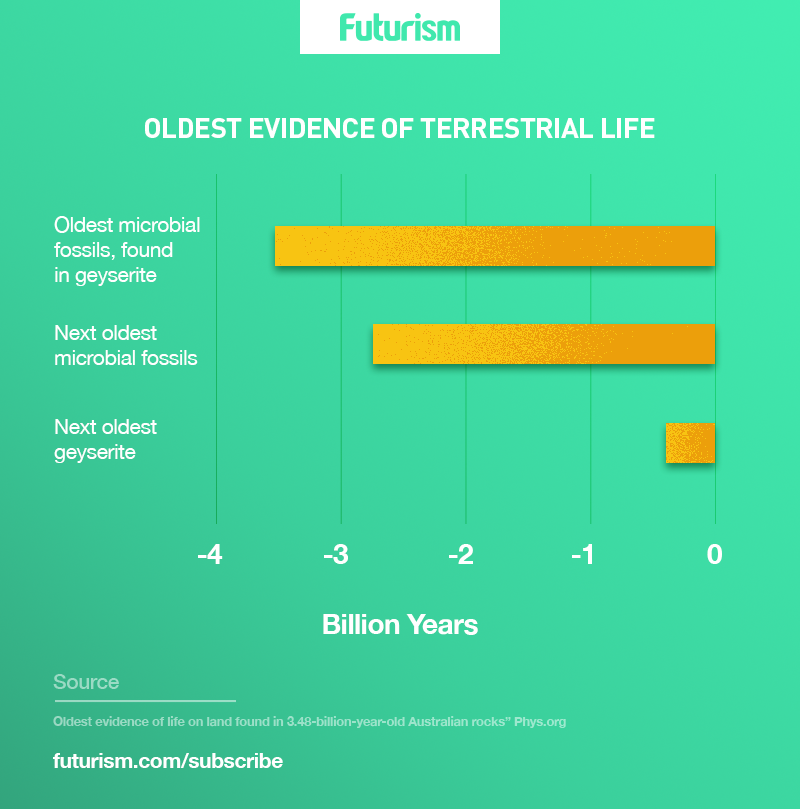 The UNSW scientists made their discovery of fossil evidence of early life while studying hot spring deposits from the ancient Dresser Formation within Western Australia’s Pilbara Craton. These well-preserved deposits were approximately 3.5 billion years old and contained evidence of geyserite, a mineral deposit found only in a terrestrial hot spring environment.

Though they are noteworthy for what they tell us about early life on Earth, the findings of the UNSW study have implications that extend far beyond our planet. “Our research also has major implications for the search for life on Mars, because the Red Planet has ancient hot spring deposits of a similar age to the Dresser Formation in the Pilbara,” Djokic explained.

Indeed, the presence of water on Mars is already backed by quite a bit of evidence. Some of this water is in the form of ponds similar to ancient hot springs on Earth, most notably in a region of the Red Planet known as Columbia Hills. “The Pilbara deposits are the same age as much of the crust of Mars, which makes hot spring deposits on the Red Planet an exciting target for our quest to find fossilized life there,” Australian Center for Astrobiology director Van Kranendonk said about the study.

Of course, this all assumes that whatever life could exist on Mars would be similar to that of Earth’s, at least on a microbial level. “If life can be preserved in hot springs so far back in Earth’s history, then there is a good chance it could be preserved in Martian hot springs, too,” Djokic concluded.

Elon Musk: “Doesn’t Seem to Be Any Life in This Solar System”