Here Are a Bunch of Photos of Cops Not Wearing Masks

Why can't they take this simple step to avoid spreading the coronavirus? 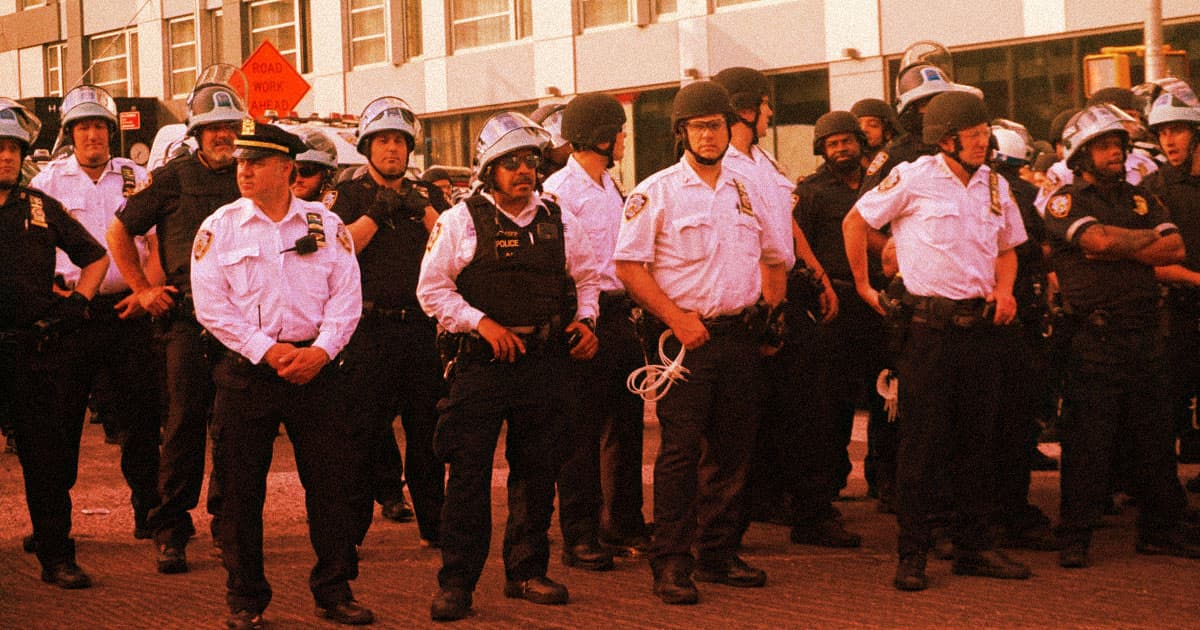 At a protest in Queens, I asked a police officer why he wasn't wearing a mask.

"Corona's over," he replied.

As Black Lives Matter protests against police violence and systematic racism erupted across the country, an unfortunate trend has emerged: while police often show up heavily armed and wearing riot gear, they seldom wear medical masks or other face coverings to prevent COVID-19 from spreading.

By not wearing masks, police are putting themselves and others at a greater risk of catching the coronavirus, experts told Time.

"If a state, if a county, if a city is telling the general public to wear masks," Johns Hopkins health researcher Amesh Adalja told Time, "then the police officers must follow that same law."

No nameplates, no badges, no insignia, no uniforms

While a number of public health experts have argued that protestors are unlikely to cause a huge explosion in coronavirus infections, that assumes that everyone takes basic common-sense measures like keeping distance where possible and wearing a medical mask that keeps them from spreading pathogens.

Some cops are skipping masks entirely. Others are wearing them wrong, by pulling them down to expose their noses or mouths.

And while being outdoors likely reduces the risk of transmission, tightly clustered police and the protestors they arrest become public health hazards. Meanwhile, as of May 4, the NYPD had spent $12 million on medical masks this year alone, pointing to a major waste of time and resources given how few cops actually wore them.

I attended multiple protests and vigils throughout New York City. At all of them, the majority of police opted to skip the face mask or wear it improperly.

Videos from other protests, like this one of Austin police opening fire on a crowd of peaceful protestors, highlight that the problem of police ignoring their masks is a national issue.

More on the protests: Experts: Protests Unlikely to Cause Huge Wave of COVID Cases

12.06.22 Breakthroughs
Scientists May Have Finally Discovered Why People Get Sick in the Winter
8.16.22 Genetics
Cops Use Newborn Baby's DNA to Nail Dad for Crime from the 90s
7.17.22 Developments
Cops Keep Having Impossible Fentanyl "Seizures" on Camera For Some Reason
6.24.22 Developments
Supreme Court Strikes Down Right to Abortion, in Horrifying Public Health Disaster
10.17.21 Developments
More Cops Have Died from COVID-19 than Guns Since Start of Pandemic