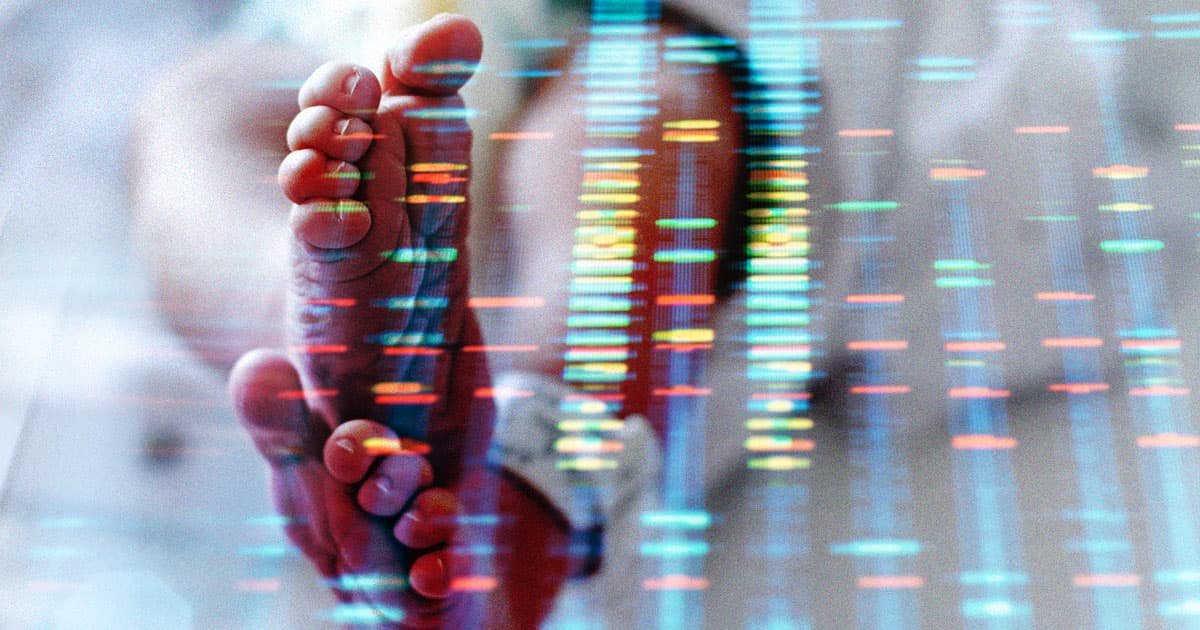 Want further proof that we're living in a sci-fi dystopia? Look no further than New Jersey, where newly-uncovered records reveal that cops used DNA taken from a newborn baby to arrest the child's father for a crime he allegedly committed decades ago.

As Wired reports, a public records request filed by the NJ Public Defender's Office and the New Jersey Monitor nonprofit news organization forced the state to reveal that it did indeed use the DNA taken from a newborn infant's blood sample to nail its father for a sexual assault committed in 1996.

If it's news to you that blood samples are taken from newborn babies, you're not alone. As Wired and the lawsuit itself note, however, most children born in the United States since the 1970s have their blood drawn to test for diseases. In the age of inexpensive genetic analysis, these commonplace newborn samples can apparently become swept into legal drama.

As the report notes, these mandatory screenings are often done without the consent of parents, though they can claim religious exemption. After being taken, these newborn samples can even be used in biomedical research, and most states don't require parental consent for that, either. All that said, however, the NJ Monitor claimed when it first filed its lawsuit that it was the first known public instance of using newborn DNA to charge a family member.

Per the lawsuit, the unnamed father in question learned that the state had successfully subpoenaed a state lab to use his now-nine-year-old child's DNA to establish a familial match for the cold sexual assault case. In particular, he learned about this when being subpoenaed himself to do a cheek DNA swab, which was then found to be a match for the genetic material taken from the 1996 assault.

In the suit, the NJ Office of the Public Defender said it believes this use of newborn DNA to get a cheek swab warrant was an "illegal search," and the office is now seeking to find out how often state police use newborn DNA in investigations.

"This is like a dystopian onion," OPD attorney Jennifer Sellitti told Wired of the case. "Every time we peel back another layer, we find some new violation of privacy."

While the use of familial DNA matches in the age of 23andMe is nothing new — the story broke wide open in 2018 when governments used consumer genetic sequencing information to catch the Golden State Killer — the concept of using the DNA of newborn babies, taken without anyone's consent, for law enforcement purposes, feels beyond the pale.

READ MORE: Police Used a Baby’s DNA to Investigate Its Father for a Crime [Wired]

2.06.23
Scientist Suggests Tweaks for Genetically Altered Supersoldiers
1.05.23 Genetics
Police Say They Used Genealogy Database to Arrest Idaho Murder Suspect
1.04.23 Genetics
Scientists Think Gregor Mendel Would Be "Happy" That They Dug Up His Body to Study His Genetics
8.26.22 Genetics
Your Doppelganger May Have Strikingly Similar Genes, Habits
7.25.22 Genetics
House Rep Worried 23andMe Will Lead to Bioweapons That Kill Specific People Based on DNA