Experts: Protests Unlikely to Cause Huge Wave of COVID Cases

"For those expecting an explosion of cases from protests, I doubt that." 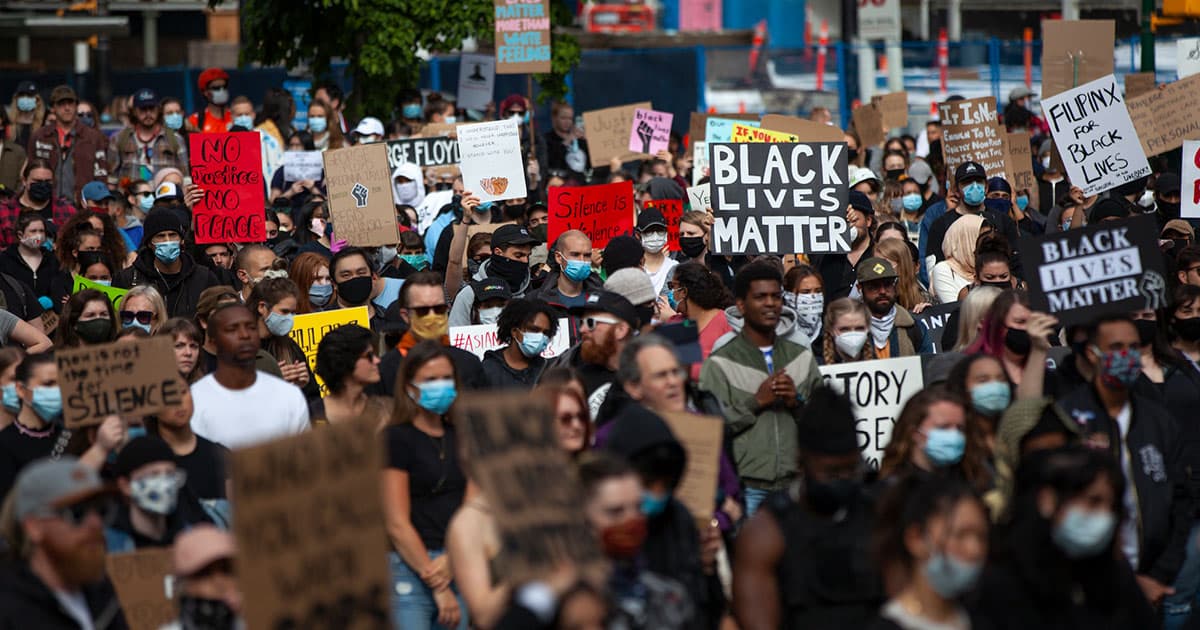 Thousands of protests have taken to the streets, largely in the United States but also across the world, to protest police brutality and systemic racism in law enforcement.

While many protesters have adhered to social distancing measures and the majority are wearing masks, health officials have raised concerns about whether the demonstrations could trigger a second wave of coronavirus cases, especially in larger cities like New York.

But not everybody agrees that protesters are at high risk of spreading the deadly virus.

"For those expecting an explosion of cases from protests, I doubt that," wrote Howard Forman, professor of radiology at the Yale School of Medicine, in a recent tweet. "Outdoor events are seemingly low risk."

Further complicating matters, the pandemic has started to fade in some areas. New York, for instance, reported its first day with no confirmed coronavirus-related death this week. It's a promising sign that the city of over eight million people is on the long road to recovery — but it's still far too early to tell what the near future will hold.

Basically, science simply doesn't have conclusive answers yet. So far, researchers can only offer educated guesses about the risks of protesting during a pandemic.

There's a growing consensus that being outdoors is safer than spending time in indoor spaces like shops or malls. Simulations have shown that air conditioning and circulating systems are very effective at moving viral particles around inside indoor environments.

But the story is quite different in the outdoors.

"There was literally a lot of running around, which means [the protesters are] exhaling more profoundly, but also passing each other very quickly," he added.

There's also the risk of asymptomatic carriers, who could be protesting without showing any symptoms.

And, needless to say, social distancing can't be enforced when you have a police officer kneeling on your neck.

"The highest risk activity is being arrested and taken away," Forman added in his tweet.

There are a countless number of questions that remain about the risks involved in gathering in large groups during a global pandemic. But one thing is clear: demonizing protesters for making their voices heard about systemic violence that has endangered Black lives for centuries is the wrong way to go.

To public health experts, that kind of messaging is a big problem.

"Staying at home, social distancing, and public masking are effective at minimizing the spread of COVID-19," reads an open letter penned and signed by infectious-disease experts at the University of Washington, as reported by The Atlantic. "To the extent possible, we support the application of these public health best practices during demonstrations that call attention to the pervasive lethal force of white supremacy."

"However, as public health advocates, we do not condemn these gatherings as risky for COVID-19 transmission," the letter reads. "We support them as vital to the national public health and to the threatened health specifically of Black people in the United States."

Read This Next
Human Experimentation
Inmates Treated With Ivermectin Without Their Knowledge
From Our Partners
Help Stop The Flu With These Virus-Fighting Masks
Hot Vax Summer
Doctors Fear Huge Spike in STIs After Pandemic
Strong Arm
Biden Admin Gives Out 100 Million Vaccine Doses in Just 58 Days
Brands We Love
This Saliva-Based Home Covid Test Lets You Skip the Lines and the Nasal Swab
More on Sci-Fi Visions
Getting Worse
Yesterday on the byte
Bitcoin Just Had Its Worst Month in Crypto's Entire History
FROM THE DEPT. OF...
Yesterday on futurism
Good Buys: Outer Brown Wicker Outdoor Armchair Conversation Set
FROM THE DEPT. OF...
Yesterday on futurism
Oh, Say Can You See These Amazing 4th of July Sales
READ MORE STORIES ABOUT / Sci-Fi Visions
Keep up.
Subscribe to our daily newsletter to keep in touch with the subjects shaping our future.
+Social+Newsletter
TopicsAbout UsContact Us
Copyright ©, Camden Media Inc All Rights Reserved. See our User Agreement, Privacy Policy and Data Use Policy. The material on this site may not be reproduced, distributed, transmitted, cached or otherwise used, except with prior written permission of Futurism. Fonts by Typekit and Monotype.