They say there's a simple trick to defeat colds and the flu. 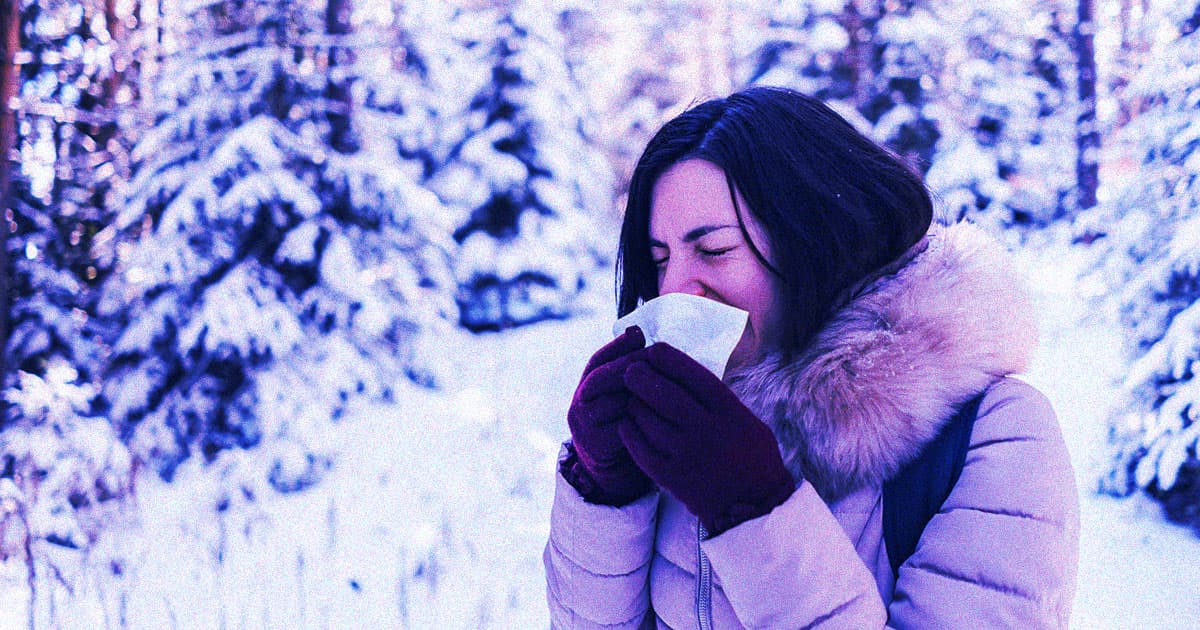 A team of researchers may have finally figured out why people are far more likely to get colds and the flu when temperatures drop during the winter.

The new study, which the scientists' peers are calling a breakthrough, draws a link between colder air temperatures and a weakened immune system.

"This is the first time that we have a biologic, molecular explanation regarding one factor of our innate immune response that appears to be limited by colder temperatures," Zara Patel, a rhinologist at Stanford University who was not involved in the research, told CNN.

The research couldn't be more timely. After being noticeably absent over the last several years thanks to the COVID-19 pandemic, the cold and flu season is back with a vengeance this year as people's bodies haven't been exposed to the usual number of pathogens.

In the study, published in The Journal of Allergy and Clinical Immunology today, the researchers found that just a nine degrees Fahrenheit drop in temperatures can kill almost 50 percent of the cells that fight bacteria and viruses inside the nostrils.

"Cold air is associated with increased viral infection because you’ve essentially lost half of your immunity just by that small drop in temperature," Benhamin Bleier, coauthor and Harvard Medical School rhinologist, told CNN.

The study does have a major caveat.

"It’s important to remember that these are in vitro studies, meaning that although it is using human tissue in the lab to study this immune response, it is not a study being carried out inside someone’s actual nose," Patel told the broadcaster.

That means there's still a chance the results may not be applicable in the real world.

"Often the findings of in vitro studies are confirmed in vivo, but not always," Patel added.

In theory, at least, the results are compelling. The team of researchers found that extracellular vesicles (EVs), small versions of cells that aren't able to divide like regular cells, can ward off respiratory viruses and invading bacteria in the nostrils.

In response to these invasions, EVs are expelled by the body to enter the nasal mucus, where they stop germs from making it any further into the body.

Even a small drop in temperature can largely undercut EV production, the researchers found, as well as knocking out other defenses, such as micro RNA that can also attack germs.

The researchers found that the temperature drop was enough to kill almost 42 percent of EVs, resulting in a roughly 50 percent drop in the immune system's ability to ward off infection, according to Bleier.

Fortunately, we're not entirely defenseless during the winter.

There's a surprisingly simple way for us to keep the cold and the flu away during the winter: keeping our nasal cavities from getting too cold by wearing a mask.

"Maybe yet another reason to wear masks!" Patel concluded.

More on viruses: Pfizer's Jacking Up the COVID Vaccine Cost to 10000 Percent