"Anything that requires open brain surgery, we should be able to provide a solution for." 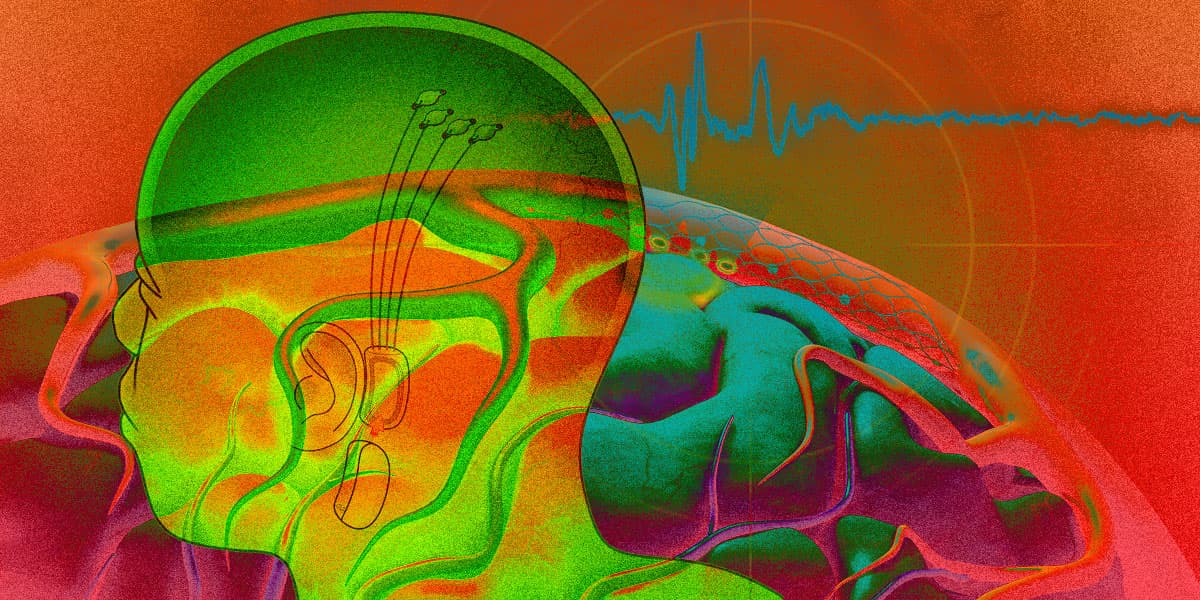 Last week, the FDA granted the neurotech startup Synchron a groundbreaking approval to conduct more ambitious experiments and test its neural implant in human paralysis patients, setting it on the path to eventually become the first brain implant to get commercial approval.

That puts it ahead of Elon Musk's own neural implant venture. Neuralink, which in spite of over $360 million in funding — nearly an order of magnitude more than the amount raised by Synchron — has yet to convince the FDA that it's ready to make the jump from its highly-publicized tech demonstrations in animals to the actual human experimentation that Musk claims will allow users to connect their brains to AI and cure their neurological conditions.

Synchron's ultimate goal is to snake stents up your jugular vein and into the vasculature that supplies your brain with oxygen, permanently implanting a distributed series of sensors that it calls the Stentrode to constantly record your entire brain's activity. Once the Stentrode is in place, CEO and founder Thomas Oxley explained to Futurism, it could allow doctors to treat conditions ranging from Parkinson's disease to paralysis, in part by allowing the brain to seamlessly communicate with computers. Oxley told Futurism that he credits decades of research into minimally-invasive procedures — not quite surgeries — that use stents, balloons, and other small devices to treat cardiovascular conditions for his rapid success with the Stentrode. Synchron relies on the same techniques that have been proven in heart procedures but, outside of stroke treatment, hasn't made a full jump to neurology.

The procedure is gruesome to imagine. But it's considerably less invasive than what Neuralink has planned: laser-drilling holes through volunteers' skulls and threading them with metal wires.

Futurism caught up with Oxley to talk about the new FDA go-ahead to conduct clinical trials and where Synchron can go from here. Here's our conversation, edited for length and clarity.

During our last interview, you had just been cleared to recruit volunteers for your first clinical trial in Australia, which was an early feasibility study. Obviously you've progressed to the point of FDA approval to begin clinical trials through this Investigational Device Exemption. What different doors has this opened up for you, and what's the next step now?

Thomas Oxley: Well, the doors that opened up were around investment. Over the last two years, there's been a huge focus on the potential for brain-computer interfaces. It's kind of weird watching how the neural interface or the brain interface has really made its way into the popular culture arena. You know, "Black Mirror," "Transcendence," "Upload," "The Feed." Most of them are dystopic. It's like there's this sense of inevitability around the fact that we're going to have electrical connections directly into our brains.

But I think the investors see that there is an application for this technology in the medical space that is going to be industry-forming. In terms of the value of this approval, a lot of the investors I speak to have trouble with the risk that comes with regulatory and reimbursement approvals for medical devices. Even though they want to get involved in the space, they have trouble understanding the risk. And I guess once we had gotten into the human research stage, that set us apart from the other companies because the other companies hadn't yet done that on their own.

Right, so the FDA approval came across as a vote of confidence as you enter uncharted territory.

Oxley: I thought I was going to have trouble raising the last round of financing until we got this FDA clearance, but Khosla Ventures stepped in on the basis of our human data in Australia and we got a great deal done. So we've been able to keep moving forward. The value is around getting through the FDA pathway on track to approval. If you want to summarize what that looks like, it's pretty simple with the FDA. Number one, do a feasibility study. Number two, do a pivotal study. Once you've finished your pivotal study, the FDA can give you approval to start selling the device and go to market. The FDA wants companies to do a feasibility study first. You do that, it's a handful of patients to make sure it's safe, make sure it works. That's what we just got approval to do in the US. And then you go into a larger pivotal study. The FDA looks at that and once that's okay, then you've got approval, and then you're first to market.

It's easy to lump together the small number of neural implant developers out there, like Neuralink and Paradromics. But compared to Neuralink's skull drilling, you're actually doing something quite different with your circuit-integrated stent. How do you feel about all of those different approaches, and is there a tradeoff for taking a less-invasive route?

Oxley: There isn't a tradeoff. It's a matter of how small the technology needs to be to get to the degree of brain signal recording that we want. So with the system that we have right now, we've chosen a very large blood vessel, which has a certain amount of access.

But the main distinction I would make between all the different approaches is that ultimately the goal should be whole-brain data transfer. And the problem with having to remove skull is that you can't reach the whole brain. You can only reach whatever part of the brain sits directly under the skull. Unless you're going to remove the entire skull, which is not a good idea.

Oxley: We need that, right? I believe that the ultimate end game for this technology is to have bidirectional data flow to all regions of the brain, and the blood vessels are the only way to achieve that.

At a more technical level, how do you access the entire brain without going through the skull?

Oxley: I don't know if you caught [University of California, San Francisco neurological surgery chairman] Eddie Chang's work [Ed: our writeup here] that got a lot of publicity about a couple of weeks ago. They were doing decoding of speech.

I think what was really interesting — the surgery also required removal of skull, but they didn't stick needles into the brain. They just put surface electrodes on the surface of the brain, which is essentially what we are doing. So the blood vessels basically lie along the surface of the brain. And for me, that study that Eddie Chang did proved that you don't need to inject needles into the brain to get really high-quality recordings. I don't ultimately believe that there is a tradeoff at all with using the blood vessels.

Do you feel that having a less invasive approach helped you win the FDA over, or is that not a factor that they considered?

Oxley: It definitely was. I mean, the FDA cares about safety. That's their job. And so it's not so much the fact that it's just the blood vessels, it's the fact that we have decades of research to point towards to understand how safe it is to leave things behind in blood vessels. They're called stents. Right? Like, we all know about stents. So I think what was important for us to move relatively quickly along this regulatory process so far with the FDA was that we could say, "Hey, we kind of know what happens when you leave a device in a blood vessel. So we're going to leverage all of that knowledge to justify our safety rationale."

Do you feel any sense of competition against the extremely well-publicized Neuralink? I mean, do the Neuralink demos impact what you do at all?

Oxley: I think what Neuralink is doing is incredible, incredible research. They have an amazing team that made a huge amount of headway. They've already had a big impact on the space. I guess we're competitors because it's the brain-computer interface field but it's such a different approach that I think whatever our product can do is going to be with consideration to the fact that the patients don't have to have this skull removed. I really think it's going to be a very different experience for the patients, so I don't really think we're directly competing.

Throughout this process, you focused very heavily on treatment for paralysis. Is that still the primary end goal, or are you now exploring other applications?

Is paralysis still the primary application for these upcoming clinical trials?

Oxley: Paralysis is our flagship.

Last time we spoke, you were talking about neural implants as a way to digitize intent — to take neural commands and translate them into machinery like robotic limbs. Is that still part of the plan as well?

Oxley: Our flagship approach in paralysis deals with the problem of not being able to move. If a patient can't move, it means they can't control a digital world. We convert the attempted movements out of the brain to a platform that gives them freedom, gives them independence. So the digitization of intent is the solution for paralysis. Now, what it's used to control remains to be seen. I mean, we're not building robotic limbs; we're building a control platform.

In your future research, whether it's the clinical work for full regulatory approval or something else down the road, what metrics are you using to measure success? Aside from the obvious safety studies and making sure that patients aren't facing any adverse effects, what measurements are you looking at?

Oxley: That's the big question. I can say that we are working very hard to quantify that metric. But that, you know, my view is that the industry forms around the selection of that metric by the first mover to market. That's going to be really important. And so we'll be sharing that at some point when it's appropriate.

You talked about the goal of whole-brain data transfer. Obviously getting that recording would be the gold standard of any brain-computer interface. Is that something that the technology can technically do today? Are there limitations in terms of accessible brain regions, or is it a matter of refinement at this point?

Oxley: It's a matter of refinement. We have a system that can be delivered into a large blood vessel. We need to miniaturize and scale. The blood vessels exist in all regions of the brain; we are building technology to reach them all now.

Editor's note 8/12/2021: This article's headline, introduction, and Q&A portion have been updated to further clarify that Synchron was granted approval to conduct human research rather than full regulatory approval.