The plant, located in Hellisheiði, Iceland, not only produces no emissions — it technically produces negative emissions. 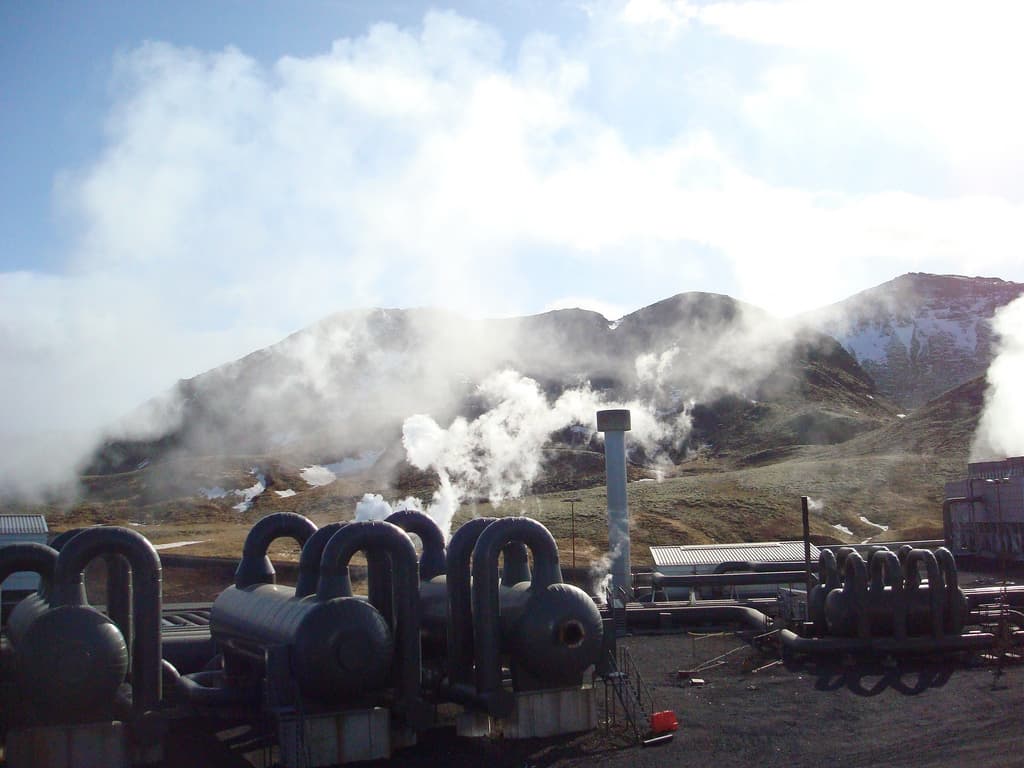 As climate change marches on, world leaders and scientists alike have considered the potential of geoengineering solutions to capture and store emissions. In fact, scientists recently concluded that we need to have "carbon-sucking" geoengineering tech in place by as early as 2030.

As reported by Quartz, it seems Iceland is ahead of that deadline, with the help of a 300-megawatt geothermal power plant that's been built in Hellisheiði. The plant captures more carbon dioxide (CO2) than it produces, meaning it produces negative emissions. That said, it's true that the plant only produces about one third of the carbon a traditional coal plant would — but more than what it emits is both captured and stored underground.

To accomplish this engineering marvel, a wall of fans sucks in air, filters out CO2, and injects the CO2 into water which is then pumped into the ground where it becomes rock. This process is simple and produces usable energy while eliminating emissions from the environment; truly a win-win. So why hasn't this technology been immediately adopted and replicated in every state in every country in the world? The short answer is cost.

The Cost of Energy

Currently, this process costs about $30 (USD) for every ton of carbon dioxide that is turned into rock, which is not particularly expensive. However, capturing the CO2 from the air would be significantly more cost-intensive. If the cost of pulling carbon dioxide could be whittled down to $100 per cycle, as its creators are aiming for, then the technology's adoptability would be much improved.

The concept of capturing and storing carbon underground is nothing brand new: geoengineering solutions to climate change have been brewing and developing for years. However, the concrete completion of this plant proves not only that this process works as intended, but that the costs of producing energy in this manner aren't completely out of reach. As the technology continues to advance and improve, they will hopefully continue to become more affordable, and in turn, more widely adopted.

If we continue to produce energy in the same manner, and at the same rate, as we currently are, climate change will only worsen. Its life-threatening repercussions will continue to become increasingly devastating — not to mention costly. While we shift from fossil fuels to renewable resources, it's important to note that our emissions aren't going anywhere.

Even if we were to eliminate our entire carbon footprint right now, we'd would still see years and years of energy usage left in our wake. This isn't to say we shouldn't do anything, as we've already jeopardized ourselves and the planet. Rather, it serves as a reminder that while we make changes regarding the types of energy we use, and how we use them, we can also invest in and support the elimination of existing emissions through emerging technology.

Read This Next
Sundowned
Mexico Bans Startup From Future Solar Geoengineering Experiments
Knew It All Along
Exxon Scientists Knew About Global Warming for Decades While Company Denied It
Dim Sun for Breakfast
Startup Says It's Started Releasing Chemical Into Atmosphere to Dim Sun
Futurism
Stanford Scientists Warn That Civilization as We Know It Will End in "Next Few Decades"
Fusion vs Fiction
Gloomy Physicists Say Nuclear Fusion Breakthrough Is Too Late to Save Us
More on Earth & Energy
Do The Worm
Yesterday on the byte
Scientists Name "Funky Worm" Amphibian After a Weird 70s Funk Song
Cow Chow
Thursday on the byte
Bill Gates Gives $12 Million to Flatulent Australian Cows
Dye in the Water
Thursday on the byte
Scientists Dye Chunks of Ocean Water Pink for Head-Turning Coastal Experiment
READ MORE STORIES ABOUT / Earth & Energy
Keep up.
Subscribe to our daily newsletter to keep in touch with the subjects shaping our future.
+Social+Newsletter
TopicsAbout UsContact Us
Copyright ©, Camden Media Inc All Rights Reserved. See our User Agreement, Privacy Policy and Data Use Policy. The material on this site may not be reproduced, distributed, transmitted, cached or otherwise used, except with prior written permission of Futurism. Articles may contain affiliate links which enable us to share in the revenue of any purchases made.
Fonts by Typekit and Monotype.