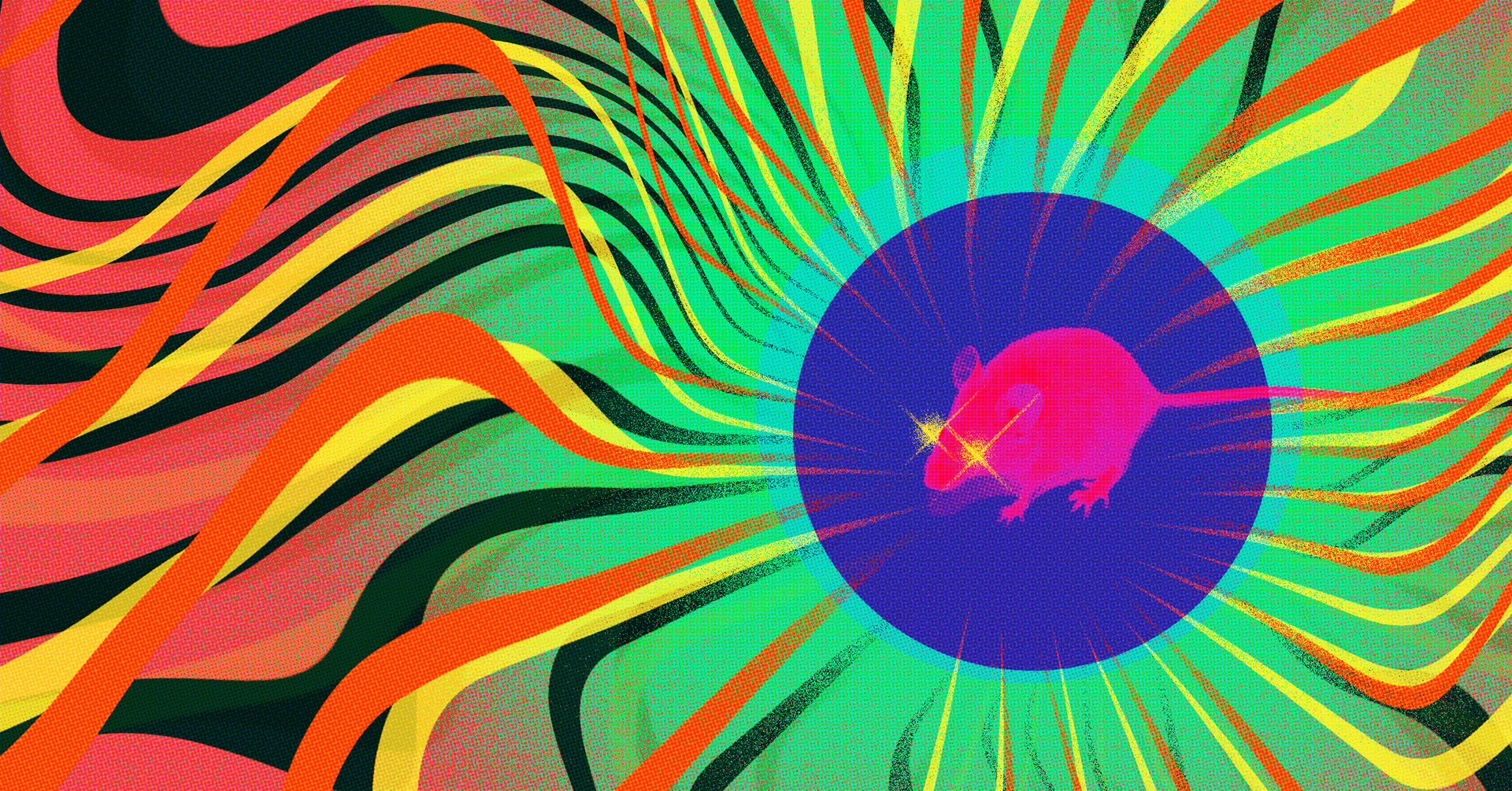 Being a literal lab rat has its perks. Free room and board. Plus all your diseases, from blindness to cancer, get cured. Suddenly one day you realize you're no longer thirsty... how neat!

There are downsides, like the fact that the researchers give you those diseases in the first place. And now you can't even make your own way to the other side of a damn maze without having your brain controlled by a device that tells you where to go.

Researchers at the Korea Advanced Institute of Science and Technology recently created cyborg mice that obeyed the commands of their human overlords, ignoring sex and food cravings entirely, to make it thorough a maze. To do this, the team of researchers "hacked" into the mice's brains using a technique called optogenetics — a process in which fiberoptic threads (or similar tools) are inserted into the brain to manipulate the activity of neurons in living tissue. Turning these threads on and off affect light-responsive proteins, influencing their function.

For this experiment, researchers made a mouse crave a ball that was placed in front of it, then chase it wildly. Turning the signal off immediately made the mouse completely disinterested in the ball. Whether the mice seemed completely bewildered by their dramatic change in desires was not altogether clear (or, at least, observable).

Next, the researchers took control of the cyborg mouse, steering it through a vicious trial maze of distractions: a female mouse in heat, an Indiana-Jones-like bridge obstacle, and plenty of delicious food. With the mind-control switch flipped to "on," the scientists were able to steer the mouse straight to the other end of the maze.

And what's the point, you may rightfully ask? The team imagines the technology could help officials control animals needed to complete scent-sensitive missions, like search and rescue, landmine detection, and sniffing out drugs.

Compared to the stiff, stumble-prone (yet determined) robots of today, animals are far more agile and able to cross treacherous terrain. “Animals are naturally able to live and move through complex environments and, of course, do not need batteries,” Daesoo Kim, project lead, tells IEEE Spectrum.

Indeed, scientists have created "remote-controlled" animals before, mostly as a proof of concept. Last year the team developed a "parasitic robot" that was mounted to the back of a turtle, and controlled its movements with a "heads-up LED display" and feeder. In 2012, researchers created cyborg cockroaches that manipulated its sensory organs with the use of a wireless transmitter glued to its back, but with external stimuli, not optogenetics.

You might wonder when this kind of technology could be used in humans. There are medical uses for deep brain stimulation, such as treatments of Parkinson's disease. But as for using optogenetics to help us avoid snack foods, seems like we're a ways off.

Read This Next
Zzz Eureka!
Human Brains Can Solve Hard Problems Moments Before Falling Asleep, Study Finds
From Our Partners
Celebrate Labor Day With Discounts On Rosetta Stone, Top-Rated VPNs, And More
From Our Partners
Hone Your Brain With Over 50% Off A Subscription To NeuroNation
Brands We Love
This Advanced Acetylcholine Supplement Boosts Your Brain for Superior Mental Clarity
From Our Partners
Gain Focus, Energy And Clarity Naturally With MindHoney
More on Sci-Fi Visions
FROM THE DEPT. OF...
12:47 PM on futurism
Tech Accessories That Are Worth the Upgrade
Smart Vision
11:56 AM on the byte
Startup Shows Off Working AR Contact Lens You Can Actually Wear
Shiny!
Yesterday on the byte
Beautiful Render Shows Starship With Full NASA Paint Job
READ MORE STORIES ABOUT / Sci-Fi Visions
Keep up.
Subscribe to our daily newsletter to keep in touch with the subjects shaping our future.
+Social+Newsletter
TopicsAbout UsContact Us
Copyright ©, Camden Media Inc All Rights Reserved. See our User Agreement, Privacy Policy and Data Use Policy. The material on this site may not be reproduced, distributed, transmitted, cached or otherwise used, except with prior written permission of Futurism. Fonts by Typekit and Monotype.