"You know, you can smell a bad idea before it's fully built." 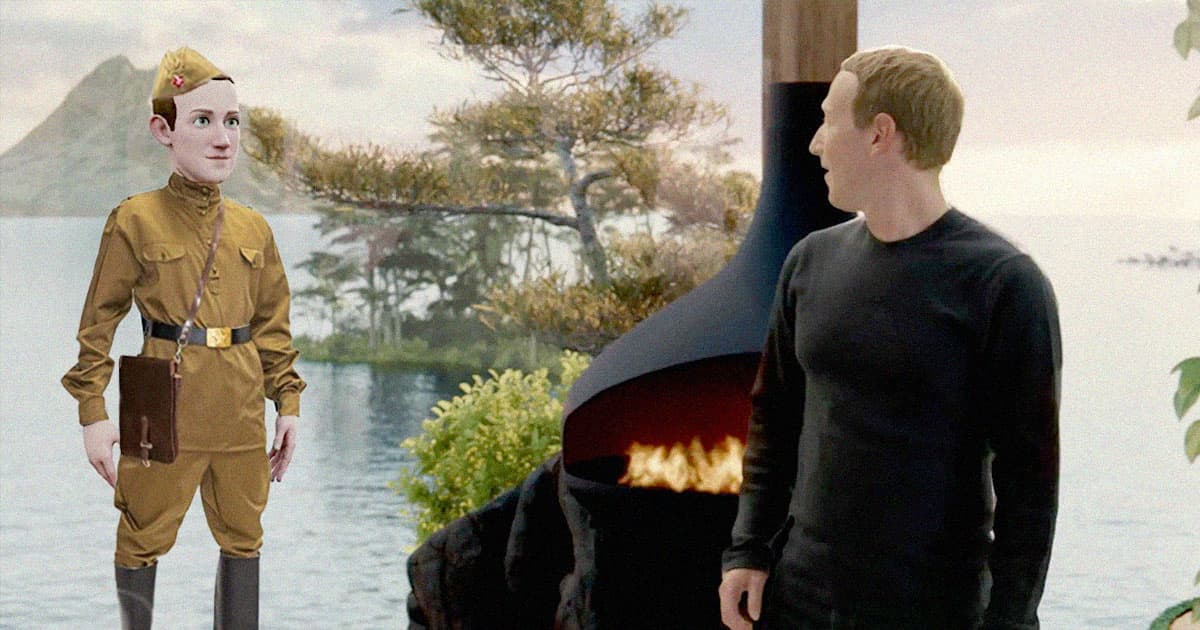 Entrepreneur Phil Libin, who grew up in the now-defunct Soviet Union, says that Facebook-now-known-as-Meta's vision for the metaverse reminds him of communist propaganda, Insider reports — empty promises of an idealized future, in other words, that will never materialize.

Libin, who founded notetaking app Evernote and is now the CEO of videoconferencing company Mmhmm, came out swinging on a recent episode of a podcast hosted by tech journalist Eric Newcomer, describing Meta's VR world as "a gloss that uncreative people and companies put over fundamentally a lack of good ideas."

In many ways, Libin is voicing an opinion shared by many, despite his scathing tone. People aren't exactly gushing with excitement over Meta's virtual world. Even the company's own executives have been known to complain about the company's still-clunky headset.

Libin likened the overhyped idea to promises made by the government in the USSR.

"I went to first grade in the Soviet Union," he explained. "I was subjected to a lot of Soviet propaganda, and I was told as a little kid repeatedly: 'Communism doesn't exist yet. We haven't built communism yet. We're building towards communism.'"

Despite the many promises, that utopian vision was never fully realized. And to Libin, the same thing applies to Meta's promises of a fully fledged virtual world that one day could rival reality.

"You know, you can smell a bad idea before it's fully built," he told Newcomer on the podcast. "So I don't want to hear 'Oh yeah, the metaverse doesn't exist yet. No, no, no, all this stuff, all this stupid, useless, crappy stuff that exists right now, that's not the metaverse. The metaverse is coming — it's coming.'"

Despite being less than a year old, Meta's vision has already attracted plenty of criticism. The company's virtual worlds are also teeming with screaming children, as Bloomberg columnist Parmy Olson noted in a recent piece — despite technically being limited to users above the age of 13.

To Libin, the Metaverse is a braindead idea that is "so spectacularly stupid, there's actually not that much to fear."

VR technologies have made significant strides in recent years, and Meta is placing some massive bets on its VR-powered metaworld. But for now, it has yet to convince a critical mass of people that it's actually a worthwhile place to spend time.

Whether that will ever change remains to be seen. Critics like Libin and even Tesla CEO Elon Musk argue that the Metaverse will never take off. Others, however, argue we will soon be spending our entire lives inside virtual worlds.

But will Meta be building the tools of tomorrow to turn that vision into a reality? That's arguably unlikely, given Facebook's abysmal track record when it comes to convincing people to true new ideas and ensuring online spaces aren't a cesspool teeming with abuse.

READ MORE: A tech founder born in the Soviet Union compared metaverse hype to the communist propaganda he experienced as a child [Insider]

More on the Metaverse: Facebook Locks Down Patents for Full-Body VR Tracking

Read This Next
Midlife Crisis
Rumors Swirl That Mark Zuckerberg Is Fighting at a UFC Show
Mark's Bad Year
Layoffs Hitting Facebook as Zuckerberg's Vision Stumbles
Sword Art Online
Guy Who Invented the Word "Metaverse" Building His Own Metaverse
Saving Face
People Bullied Mark Zuckerberg So Much That He's Improving the Metaverse Graphics
Meta-Terrorism
OnlyFans Accused of Paying Bribes to Put Enemies on Terrorist Watchlist
More on Future Society
Elon Leaks
Yesterday on futurism
Here's The Wildest Elon Musk Texts That Were Just Released in Court
Elon's Dust
Yesterday on the byte
Former Tesla Engineer Absolutely Destroys Elon Musk
Deep and Very Fake
Yesterday on futurism
Bruce Willis Signs Deal to Get Deepfaked Into Future Movies
READ MORE STORIES ABOUT / Future Society
Keep up.
Subscribe to our daily newsletter to keep in touch with the subjects shaping our future.
+Social+Newsletter
TopicsAbout UsContact Us
Copyright ©, Camden Media Inc All Rights Reserved. See our User Agreement, Privacy Policy and Data Use Policy. The material on this site may not be reproduced, distributed, transmitted, cached or otherwise used, except with prior written permission of Futurism. Articles may contain affiliate links which enable us to share in the revenue of any purchases made.
Fonts by Typekit and Monotype.