"Can we get the sneering and mockery out of the way?" 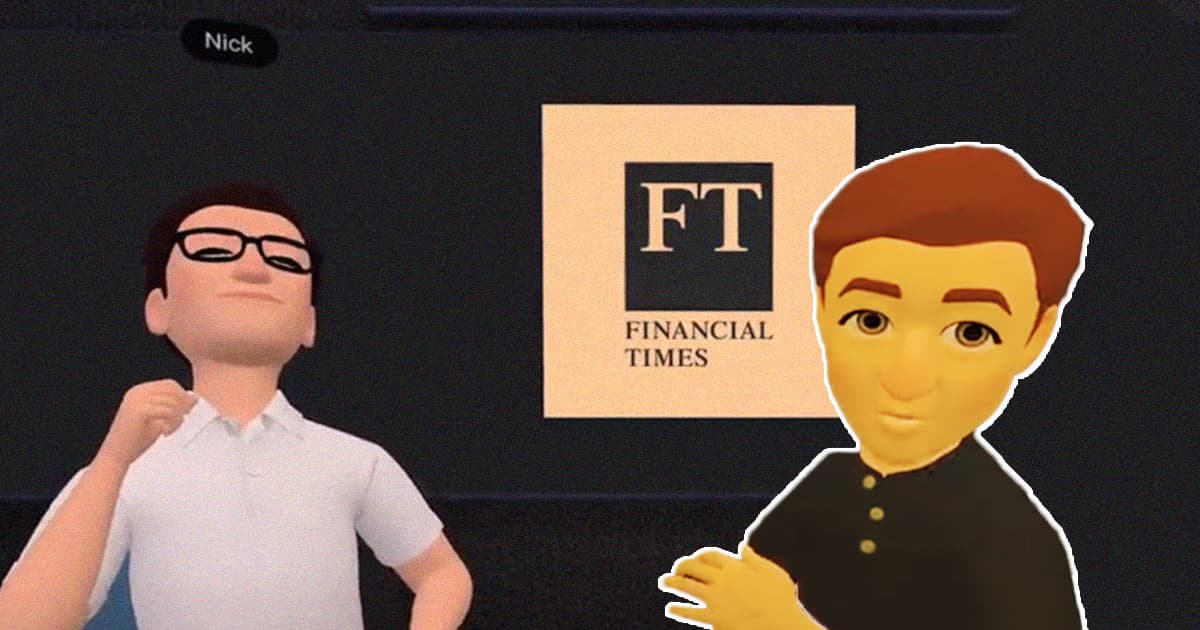 In a recent interview with the Financial Times, Clegg had a hard time drinking his coffee while wearing the headset — with hilarious consequences, as a clip shared by the publication's Henry Mance shows.

The head of Clegg's VR avatar snapped back unnaturally, the consequence of having to lift his VR headset to have a sip of his beverage.

"If I'm lifting my head, it's because I'm drinking my coffee and this wretched headset is too bulky for me to drink my coffee without moving my headset," he told Mance. "So don't think I'm craning my head weirdly."

It's a rather damning confession, considering how close Clegg is to Meta CEO Mark Zuckerberg — and just how much the latter is betting on making VR spaces the future of the internet.

As the technology stands right now, the metaverse isn't going to replace physical interaction any time soon. VR spaces on the company's Horizon platforms are filled with screaming children and men making unwanted advances on the proportionally few women users.

And in the world of journalism, Clegg is clearly struggling to sell Mance on the feature.

"Can we get the sneering and mockery out of the way?" Clegg told Mance upon their virtual meeting. After all, staring at a crude, legless floating head that only vaguely approximates its human counterpart isn't exactly conducive to an insightful one-on-one.

And that's not to mention that VR headsets are still pretty enormous and bulky. While designs have come a long way, particularly thanks to advancements in wireless technologies, the ability to sip a coffee while catching up inside what Facebook is calling the "metaverse" should be a pretty basic expectation.

"This is an extremely funny clip," The New York Times tech reporter Will Oremus wrote in a tweet responding to Mance's video, "but are we really calling whatever glitchy VR videoconference app this is 'the metaverse' now just because Facebook says so?"

More on the metaverse: Sexual Assault Is Already Happening in the Metaverse

Read This Next
Confrontation is Hard
Former Facebook Exec Says Zuckerberg Has Surrounded Himself With Sycophants
Virtual Signing
Sign Language in Virtual Reality Actually Looks Kinda Awesome
Zesus
Interesting Theory: Mark Zuckerberg Is Trying to Become God and Build Heaven
Make Mark Happy
Facebook Employees Seem Completely Confused by the Metaverse
Midlife Crisis
Rumors Swirl That Mark Zuckerberg Is Fighting at a UFC Show
More on Future Society
Musk's Guns
Yesterday on the byte
We Are Alarmed by Every Detail of Elon Musk's Bedside Table
Head Like A Hole
Nov 23 on futurism
Elon Musk's Crying About Trent Reznor Shows That He Is a Big, Big Baby
Miserly Musk
Nov 22 on the byte
Cheapskate Elon Musk Refusing to Pay Bills at Twitter
READ MORE STORIES ABOUT / Future Society
Keep up.
Subscribe to our daily newsletter to keep in touch with the subjects shaping our future.
+Social+Newsletter
TopicsAbout UsContact Us
Copyright ©, Camden Media Inc All Rights Reserved. See our User Agreement, Privacy Policy and Data Use Policy. The material on this site may not be reproduced, distributed, transmitted, cached or otherwise used, except with prior written permission of Futurism. Articles may contain affiliate links which enable us to share in the revenue of any purchases made.
Fonts by Typekit and Monotype.