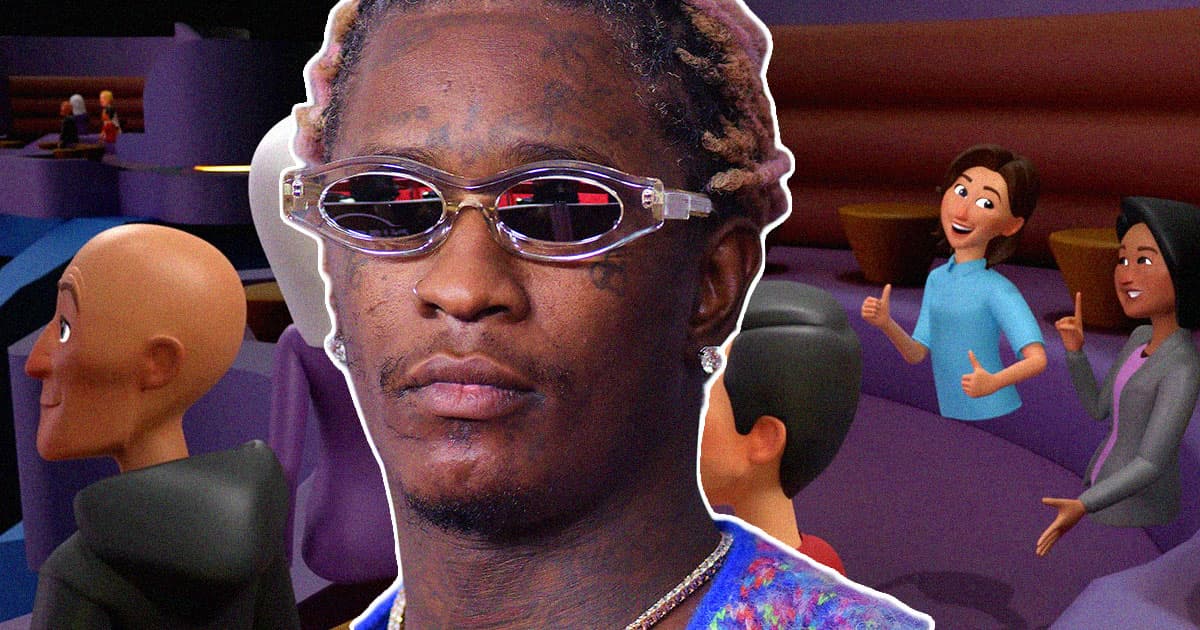 Well, Facebook’s metaverse is off to a depressing start.

Meta — aka the artist formerly known as Facebook — announced a slate of big name virtual reality concerts set to take place entirely in in its Horizon Venues metaverse last month. The star-studded lineup included rapper Young Thug on December 26, DJ David Guetta on December 31, and finally EDM duo The Chainsmokers for a New Years’ Eve concert to ring in 2022.

The only problem? Not many people noticed — and those who did didn’t seem to really care.

Despite being completely free, the concerts seemed to get incredibly little traction or notice from anyone outside of Meta offices. There was barely any mention of any of the performances on social media platforms like Twitter or even Facebook, let alone on news and music publications.

It probably wasn’t helped by the fact that the concerts were barely optimized for a VR experience. Guetta just had a 2D live streamed video of his performance at the Louvre Abu Dhabi. Meanwhile, Young Thug and The Chainsmokers offered just a 180 degree view of their concert for Oculus users.

Young Thug's performance racked up just north of 100,000 views, while Guetta’s performances accumulated almost a million. The Chainsmokers' performance, for its part, seems to have been removed. And keep in mind, too, that Facebook has been known to put a very optimistic spin on view counts previously in order to build hype for its fledgling video streaming platform.

If you think about it for just a second, it makes sense. Watching a concert alone while wearing a VR headset at home isn’t how a lot of people want to spend their New Year’s Eve — even if they are massive fans of The Chainsmokers for some reason.

Overall, it seems like the metaverse concerts weren’t the hit Zuckerberg was hoping they’d be. And the elephant in the room, of course, is Travis Scott’s Fortnite concert last year, which drew tens of millions of participants and commanded huge amounts of media attention.

So while Meta has set some ambitious goals for itself, it seems like creating a successful metaverse and drawing new users in is going to take a lot more than some free concerts.

Read This Next
Virtual Murder
UAE Official Says Murder Should Be Illegal in the Metaverse
Notaverse
In Extremely Confusing Twist, Facebook Says It Isn't Building a Metaverse After All
Facebook Needs to be Stopped
Facebook Admits It Doesn't Know What It Does With Your Private Data
Uncanny Marketing
Facebook Exec Defends Verifying Fake CGI People on Instagram
Tyrannosaurus Exec
Mark Zuckerberg Says That When Employees Call Him the "Eye of Sauron," It's Actually a Compliment
More on Future Society
Vatican Vagrant
Yesterday on the byte
Elon Musk Takes Flabbergastingly Awkwardly Picture With the Pope
Movie Magic
Yesterday on the byte
Robots Now Delivering VR Porn Headsets to the Terminally Lonely
McDoom
Yesterday on the byte
Sorry Folks, That Photo of Doom Running on a McDonald's Kiosk Is Fake
READ MORE STORIES ABOUT / Future Society
Keep up.
Subscribe to our daily newsletter to keep in touch with the subjects shaping our future.
+Social+Newsletter
TopicsAbout UsContact Us
Copyright ©, Camden Media Inc All Rights Reserved. See our User Agreement, Privacy Policy and Data Use Policy. The material on this site may not be reproduced, distributed, transmitted, cached or otherwise used, except with prior written permission of Futurism. Fonts by Typekit and Monotype.