Who are these for? 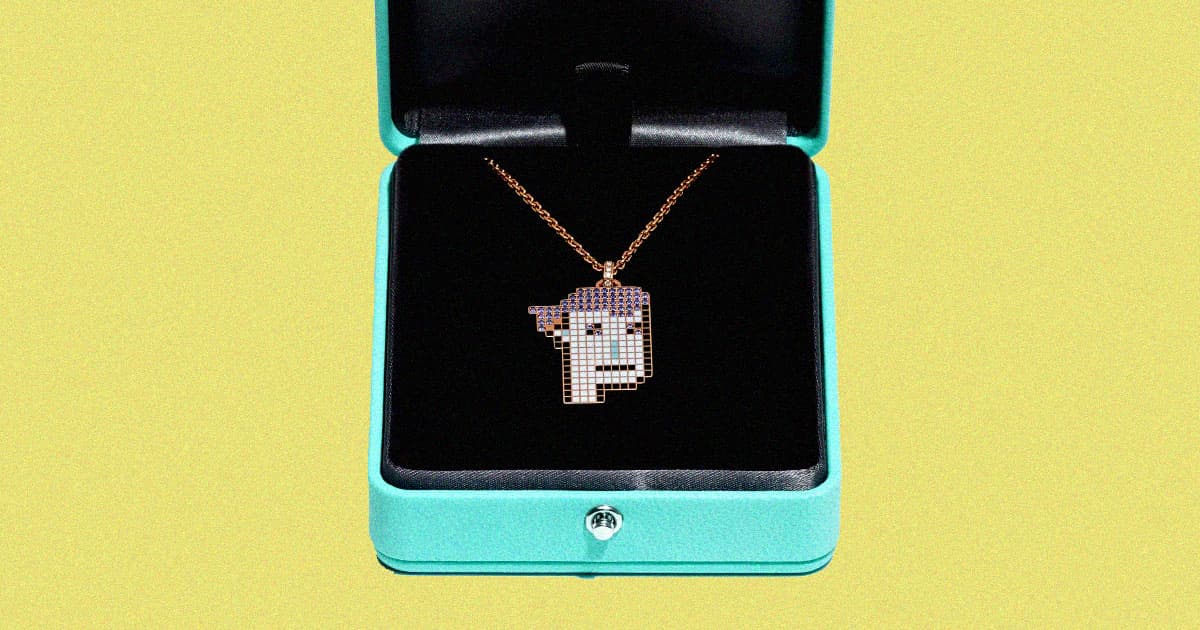 Luxury jewelry maker Tiffany, the storied namesake of the classic flick "Breakfast at Tiffany's," is launching an "exclusive" line of wildly expensive and incredibly ugly CryptoPunk-inspired pendants called NFTiffs — and we have no idea who could possibly want to buy one.

"We're taking NFTs to the next level," the brand wrote in a Sunday tweet. "Exclusive to CryptoPunks holders, NFTiff transforms your NFT into a bespoke pendant handcrafted by Tiffany & Co. artisans."

CryptoPunks are one of the biggest NFT collections out there by sales volume, and date back to the early days of the NFT trend.

Here's how Tiffany's scheme works: the first 250 CryptoPunk NFT holders that purchase the NFTiffs will receive both a real-life pendant that resembles their CryptoPunk NFT, as well as a corresponding NFTiff NFT.

Though, as Vogue Business reporter Maghan McDowell pointed out on Twitter, some details are still a bit hazy.

Like the bulk of Tiffany's offerings, these necklace don't come cheap — each of the NFT pendants will ring in at about 30 Ethereum each, which is currently worth around $48,500.

That's a pretty penny to spend on something so truly hideous — especially when the price of NFTs has plummeted amid a widespread crypto crash.

Which leaves the question: why? Besides, who is the target audience, anyway?

Collectively, the fashion world has approached the Web3 environment with a decent amount of interest. Decentraland has already hosted a virtual Fashion Week, and luxury brands like Balmain and Prada have also dipped their toes in Web3 waters.

Back in April, the brand's executive vice president Alexandre Arnault, son of the world's third-richest man Bernard Arnault, gushed over one of the first pendants.

Interestingly, Alexandre Arnault — who notably has been accused of insider trading related to high-dollar NFTs in the past — has taken a radically different approach to Web3 than his father, who has reigned as CEO of LVMH Moët Hennessy Louis Vuitton (LVMH), a massive luxury conglomerate, for decades.

"At present we're in the real world selling real products," Bernard Arnault told investors back in January. "We are not interested in selling virtual sneakers for ten euros. We're not into that."

Despite his comments, LVMH mainstay Louis Vuitton has since launched its own NFT project.

According to Alexandre Arnault, the NFTiffs endeavor isn't just about his own apparent love for CryptoPunks. Referring back to an April Twitter poll, the Tiffany VP announced that this is what "the community" asked for.

That being said, it's certainly worth wondering who, exactly, is part of "the community" that Alexandre Arnault is referring to here. Is there really an overlap between CryptoPunk collectors and Tiffany's regular, ultra-wealthy customers?

In any case, it's fascinating to see the ways that old-guard luxury brands like Tiffany continue to engage — or reject — the Web3 world.

But whether anybody will actually end up buying one of these hideous trinkets remains to be seen. We're certainly not holding our breath.

Read This Next
FTuxxed
Behind the Lawsuit Against Celebs Who Shilled FTX Before Its Spectacular Meltdown
Toes in the Water
Guy Linked to Huge Crypto Meltdown Says It’s Just a Coincidence That He’s Hanging Out in a Country With No Extradition to United States
Guest List
Celebrities Are Officially Being Sued by FTX Retail Investors
Tumblr or Bust
This Strongly Appears To Be Alameda CEO Caroline Ellison's Tumblr Account
Subway Menace
Tom Brady Appears to Be Totally Screwed by the FTX Collapse
More on Blocknik
Champagne Bathtubs
Yesterday on the byte
Miami Nightclubs Horrified That Big-Spending Crypto Bros Are Broke Now
Like Dominos
Yesterday on the byte
BlockFi Just Filed for Bankruptcy
Not GOATed
Yesterday on the byte
Crypto Guys Spend $600,000 on Hideous Wormlike Elon Musk Statue, Causing Their Coin to Crash
READ MORE STORIES ABOUT / Blocknik
Keep up.
Subscribe to our daily newsletter to keep in touch with the subjects shaping our future.
+Social+Newsletter
TopicsAbout UsContact Us
Copyright ©, Camden Media Inc All Rights Reserved. See our User Agreement, Privacy Policy and Data Use Policy. The material on this site may not be reproduced, distributed, transmitted, cached or otherwise used, except with prior written permission of Futurism. Articles may contain affiliate links which enable us to share in the revenue of any purchases made.
Fonts by Typekit and Monotype.