He was found dead just hours after news emerged he would face extradition to the US. 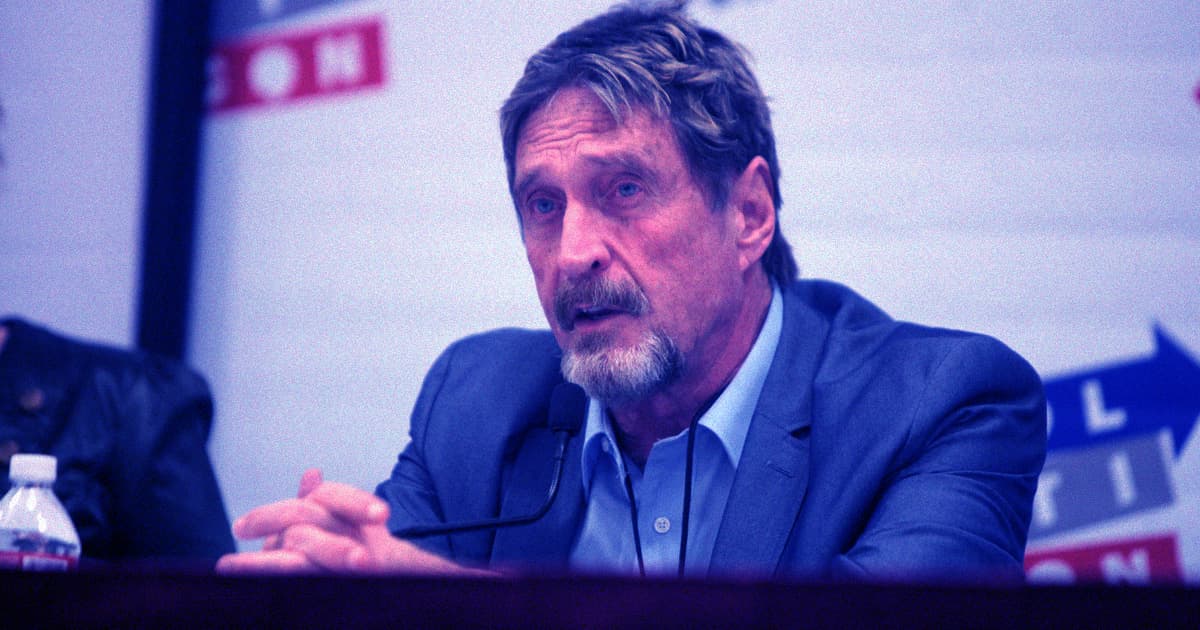 John McAfee, an eccentric software pioneer who lived on the lam for many years, was found dead in a Spanish prison cell Wednesday evening.

According to a statement released by the Catalan justice department and obtained by Reuters, suicide is the most likely cause.

The news comes just hours after news emerged that McAfee would face extradition to the US after a Spanish High Court ruling.

McAfee was arrested at Barcelona's airport in October 2020 on tax evasion charges. A 10-count indictment filed in Tennessee accused him of evading taxes on millions of dollars in income.

McAfee was a veteran headline maker. In 2018, the eccentric millionaire claimed he was poisoned by "his enemies," according to a tweet.

He also became embroiled with the US Securities and Exchange Commission at the time, accusing them of endangering his life for promoting new cryptocurrencies.

He had also sometimes demonstrated a paranoid streak, posting in 2019 that unspecified "US officials" intended to kill him and make it look like a suicide.

McAfee also was forced to run his second US presidential campaign in 2019 in exile to avoid being charged for tax fraud. He ran for the Libertarian Party nomination for president of the United States in both 2016 and 2020.

The entrepreneur most famously founded the software company McAfee Associates in 1987, which later became a successful commercial antivirus software.

Read This Next
False Flag
John McAfee Faked His Death and Is Still Alive, Ex-Girlfriend Claims
Beyond the Grave
John McAfee's Instagram Posted Something After He Died
Slaps on Wrists
SEC Report: Tesla Failed to Control Elon Musk's Tweets
Big Talk
John McAfee Vows to Reveal Bitcoin’s Creator
Courtside Seats
What Elon Musk’s SEC Hearing Could Mean for Tesla’s Future
More on Future Society
I Silence Thee
Yesterday on futurism
Leaked Messages Seem to Show Elon Musk Using Twitter to Punish His Enemies
Gas Giant
Friday on the byte
Journalist Eats Lab-Grown Chicken, Gets "Weirdly Gassy"
Musk Rats
Thursday on the byte
Twitter Is Quietly Re-Suspending the Lunatics Elon Musk Let Back On
READ MORE STORIES ABOUT / Future Society
Keep up.
Subscribe to our daily newsletter to keep in touch with the subjects shaping our future.
+Social+Newsletter
TopicsAbout UsContact Us
Copyright ©, Camden Media Inc All Rights Reserved. See our User Agreement, Privacy Policy and Data Use Policy. The material on this site may not be reproduced, distributed, transmitted, cached or otherwise used, except with prior written permission of Futurism. Articles may contain affiliate links which enable us to share in the revenue of any purchases made.
Fonts by Typekit and Monotype.