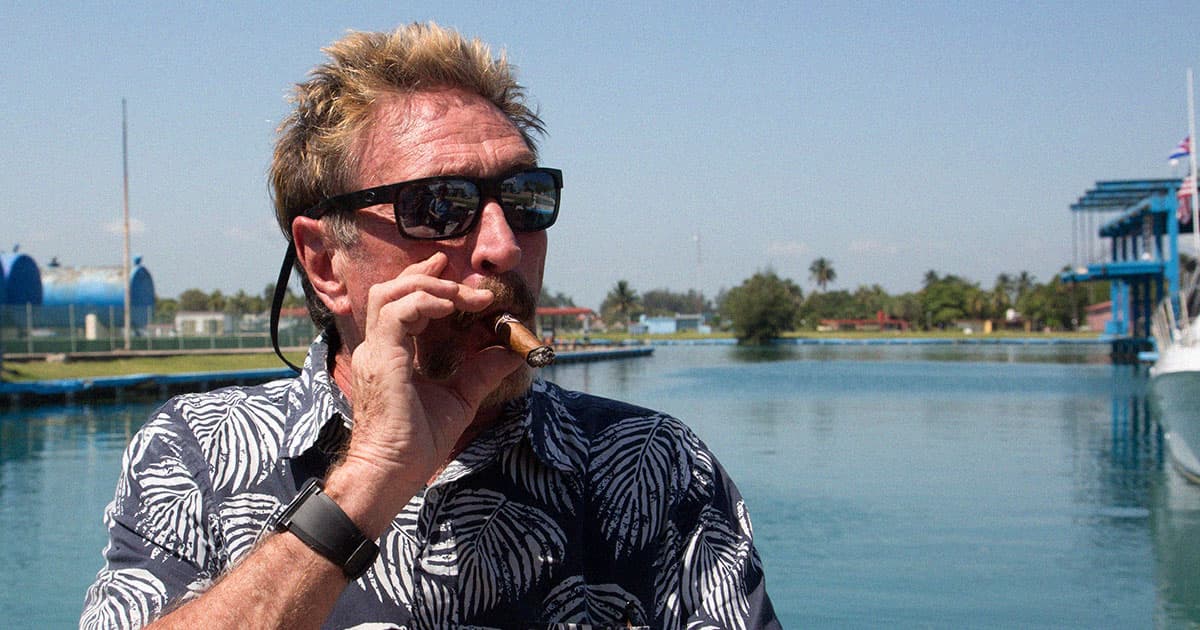 Remember when John McAfee died last summer in an apparent suicide? According to a dubious claim by one of his exes, it was all an elaborate hoax.

In a new Netflix documentary titled "Running With the Devil: The Wild World of John McAfee," McAfee's Belizean ex Samantha Herrera claims that the fugitive tech entrepreneur called her after his reports of his death by suicide in June 2021 and asked her to run away with him.

"I don’t know if I should say," Herrera told the cameras, "but two weeks ago, after his death, I got a call from Texas: 'It’s me, John. I paid off people to pretend that I am dead, but I am not dead.'"

"'There are only three persons in this world that know I’m still alive,'" Herrera claims that McAfee told her.

Let's be clear: in one way or another, this is almost certainly shenanigans. It's possible that Herrera is the victim of a hoax herself, that she's making stuff up for publicity, or some other strange explanation. But it's very, very unlikely that McAfee is still alive.

The claims are notable, though, because Herrera does have something akin to credibility given that the pair were together in her native Belize in 2012 when McAfee's neighbor, Gregory Faull, was murdered execution-style after fighting with the antivirus pioneer over his dogs.

She then went on the lam with him when authorities began seeking him for questioning in the Florida-born Faull's murder, though McAfee claims in the documentary footage that he was really running from the Belizean prime minister, who'd put a $150,000 bounty on his head.

"His side of the story is that they’re after him because he didn’t pay off the government," Herrara said in the documentary. "They wanted to hurt him, to get rid of him."

Herrara not only got her big-time lawyer relative Telésforo Guerra to defend her infamous American boyfriend, the New York Post notes in a summary of the documentary, but helped McAfee flee the country and was at his side when he had a heart attack while hiding out in Guatemala City.

When the pair relocated to the United States, however, McAfee broke things off with her, marrying a woman named Janice Dyson — who, it should be noted, believes he was murdered and did not commit suicide.

In an interview with Esquire, documentary director Charlie Russell said he can't make heads or tails of Herrera's claim that McAfee called her after he reportedly had died.

"I don’t know what I think and I don’t think she does," Russell said. "She says it, then she looks at the camera, and I can’t work out whether she thinks it’s real or not."

And sure, the whole story sounds too outrageous to be believed — but then again, so did the rest of the antivirus entrepreneur's drug-fueled fugitive life.

READ MORE: “What if He’s Still out There?”: John McAfee Documentary Director on That Call From Beyond the Grave [Esquire]

Read This Next
Body Farm
California Legalizes Composting Human Bodies
Death and Taxes
Direct-to-Consumer Companies Are Trying to Disrupt the Cremation Industry
Harvard Fraud
Scammers Are Creating Fake Students on Harvard.edu and Using Them to Shill Brands
Beyond the Grave
John McAfee's Instagram Posted Something After He Died
RIP
John McAfee Found Dead in Prison Cell
More on Future Society
Gas Giant
5:25 PM on the byte
Journalist Eats Lab-Grown Chicken, Gets "Weirdly Gassy"
Musk Rats
Yesterday on the byte
Twitter Is Quietly Re-Suspending the Lunatics Elon Musk Let Back On
Going Wireless
Wednesday on futurism
Hackers Took Over a Subdomain of Wired.com for Several Months and Replaced It With Sleazy Online Casino Content
READ MORE STORIES ABOUT / Future Society
Keep up.
Subscribe to our daily newsletter to keep in touch with the subjects shaping our future.
+Social+Newsletter
TopicsAbout UsContact Us
Copyright ©, Camden Media Inc All Rights Reserved. See our User Agreement, Privacy Policy and Data Use Policy. The material on this site may not be reproduced, distributed, transmitted, cached or otherwise used, except with prior written permission of Futurism. Articles may contain affiliate links which enable us to share in the revenue of any purchases made.
Fonts by Typekit and Monotype.