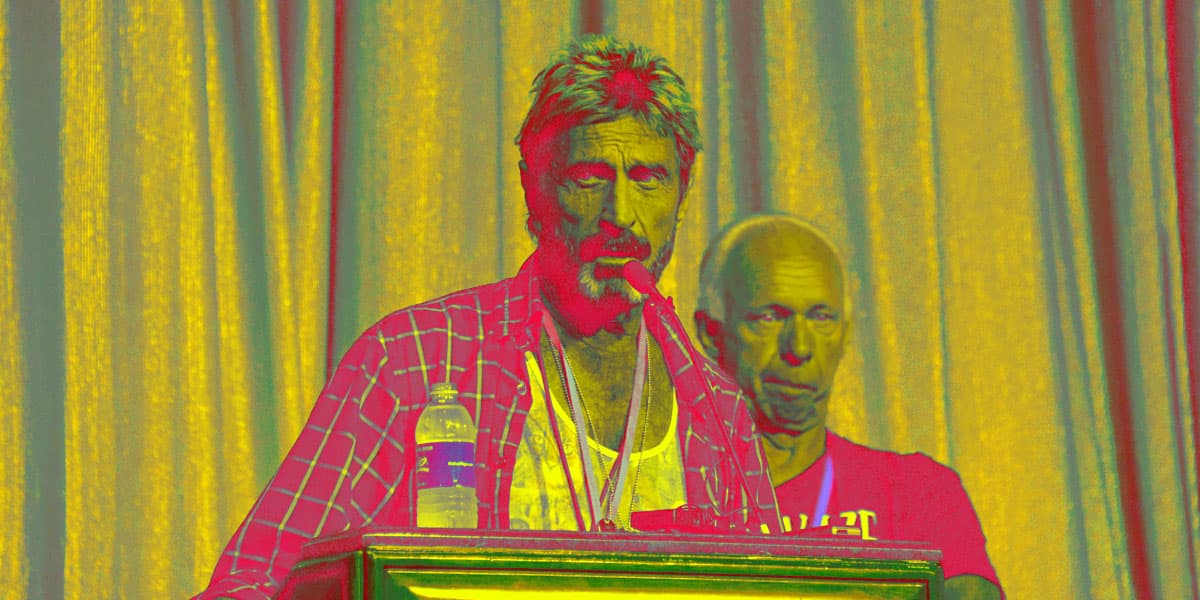 After news emerged that John McAfee died of a suspected suicide in his jail cell in Barcelona, Spain, his official Instagram account posted a black and white image of the letter "Q."

After reports of John McAfee's death, his social media team just posted a "Q" to his Instagram account.

McAfee has alleged a ton of global conspiracies against him in the past, and done plenty of media stunts.

It was announced today he would be extradited back to the U.S. pic.twitter.com/oUBZiFPRZa

It's unclear if the post is in reference to the bizarre conspiracy known as "Qanon" — but given McAfee's penchant for baseless conspiracy theories, it's not exactly a stretch.

It's also not the first time McAfee has made references to Q, making several mentions of the conspiracy on his Twitter account over the last couple of years.

The entrepreneur has a long history of making dubious claims. For instance, McAfee tweeted in June 2019 that he had "collected files on corruption in governments. I'll begin with a corrupt CIA agent and two Bahamian officials. Coming today. If I'm arrested or disappear, 31 plus terrabytes [sic] of incriminating data will be released to the press."

That apparent threat makes any posthumous post by McAfee intriguing, to say the least.

But unless actual "incriminating data" emerges, the much likelier explanation is that McAfee just wanted to troll the world one more time, by instructing a confidante to post the image to his account after his death.

The software entrepreneur was arrested in October 2020 under charges of tax fraud. He was accused of failing to pay taxes on millions of dollars of income.

In general, he wasn't a big fan of paying his taxes. In 2019, he tweeted that "taxation is illegal."

McAfee has also held that the Securities and Exchange Commission was threatening is life, claiming back in 2018 that he was poisoned by his "enemies."

Given McAfee's repeated eccentric claims of being the target of an expansive government conspiracy, his posthumous Instagram post shouldn't come as a surprise.

The post, however, may only serve to fan the flames of a discredited conspiracy theory that has pervaded many parts of US society, even making its way into Congress.

So checkmate, McAfee — it looks like you found a way to make the world a little worse even after you died.