If You Think Joe Rogan Is Credible, This Bizarre Clip of Him Yelling at a Scientist Will Probably Change Your Mind 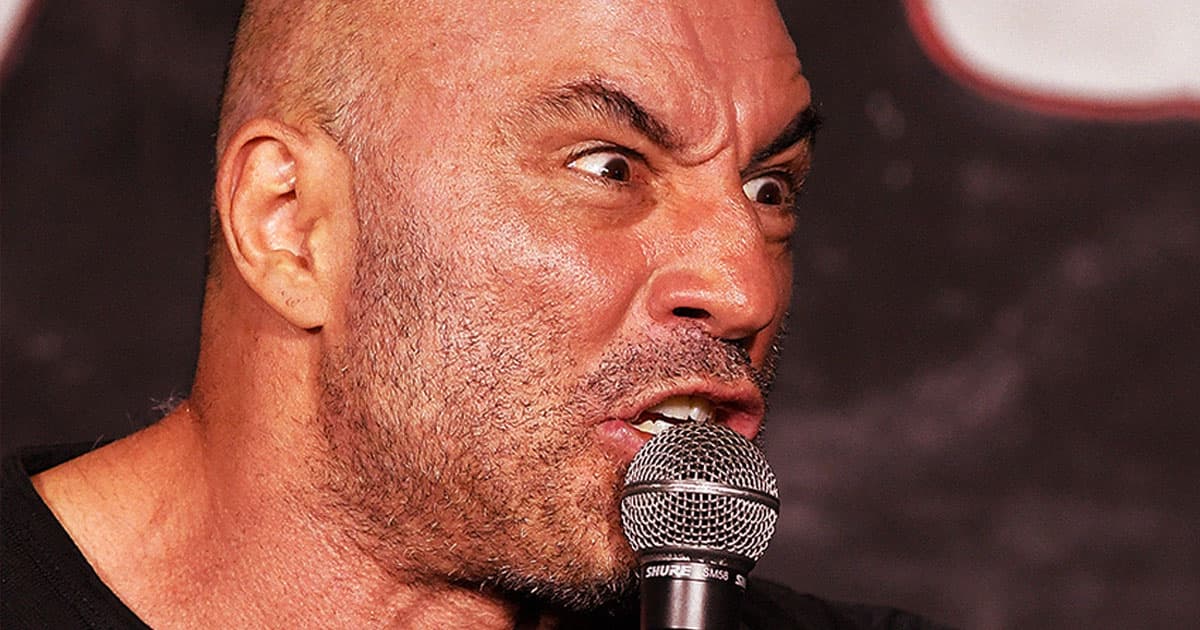 Podcaster Joe Rogan is once again in the news for being an anti-science dimwit — and even a quick perusal of his past statements shows that this isn't exactly the first time.

This week, hundreds of medical experts signed an open letter condemning Rogan and Spotify, the streaming company that owns exclusive rights to his podcast "The Joe Rogan Experience," for spreading misinformation on his uber-popular show since the beginning of the COVID-19 pandemic.

Rogan has insisted on inviting problematic guests on his show and spewing his own vile rhetoric long before 2020, the year he inked a deal with Spotify reportedly worth more than $100 million.

Many see Rogan as a well-intentioned psychedelics enthusiast who's simply too invested in the concept of free speech to recognize that many of his guests hold dangerous ideas.

A recently-resurfaced clip of Rogan absolutely losing it on a primatologist, however, throws water on that theory — in much the same way scientific facts tend to quash the misguided nonsense he and his guests often spout on the show.

After spending roughly five minutes going off about a now-debunked pseudoscientific theory of the "Bondo ape" — a purported Congolese super-ape that supposedly could walk upright like a human and was hyper-aggressive — Rogan took a call from a Floridian primatologist who identified herself only as "Allison."

She countered that "there's no such thing as a Bondo ape" — but before she could even finish her sentence, the host was jumping down her throat, calling her a "fucking idiot" and telling the PhD scientist that she should go "online" and look it up. No, we're not making this up.

Back in reality, of course, the Bondo or "Bili" ape theory was debunked in the early 2000s when scientists discovered via DNA tests that the species actually belonged to the common chimpanzee. The credibility of the Bondo ape, in other words, lies somewhere between Bigfoot and the Loch Ness Monster.

To her credit, the primatologist fought valiantly in the face of Rogan's childish derision as he repeatedly called her "stupid" and suggested she was simply behind the times, citing dubious research to back up his claims.

At the end of the segment, after the primatologist was disconnected, Rogan continued to make fun of her, including mocking her for having a vagina — a preposterously sexist barb that should give anybody listening to his show pause.

Though it's unclear when this clip actually aired, it likely dates back to around the time period when Rogan was gaining popularity with his podcast around ten years ago.

Excusing ridiculous beliefs in the interest of "hearing both sides" is nothing new — but this clip is truly jarring.

READ MORE: Joe Rogan's Fans are Shredding Him for Being a Moron About Covid

Read This Next
Might See Nonsense
MSN Fired Its Human Journalists and Replaced Them With AI That Publishes Fake News About Mermaids and Bigfoot
Uh Oh
Research Confirms TikTok Is a Cesspool of Misinformation
Bad Science
Cosmologist Lists the Stupidest Things People Believe About Space
Starting Young
Google Is Trying to Teach Kids How to Spot Fake News
Flat Affect
New Research: YouTube Caused The "Flat Earther" Epidemic
More on Future Society
YouTube Propaganda
4:34 PM on the byte
Experts Say There's Something Very Weird About North Korean YouTubers
Bird Crap
Feb 4 on the byte
It Looks Like Elon Musk Is Actually Building a Twitter Payment Platform
Balloon News
Feb 3 on futurism
China Says "Spy Balloon" Soaring Over America Is Completely Innocent
READ MORE STORIES ABOUT / Future Society
Keep up.
Subscribe to our daily newsletter to keep in touch with the subjects shaping our future.
+Social+Newsletter
TopicsAbout UsContact Us
Copyright ©, Camden Media Inc All Rights Reserved. See our User Agreement, Privacy Policy and Data Use Policy. The material on this site may not be reproduced, distributed, transmitted, cached or otherwise used, except with prior written permission of Futurism. Articles may contain affiliate links which enable us to share in the revenue of any purchases made.
Fonts by Typekit and Monotype.