Easier yet, he could just get vaccinated. 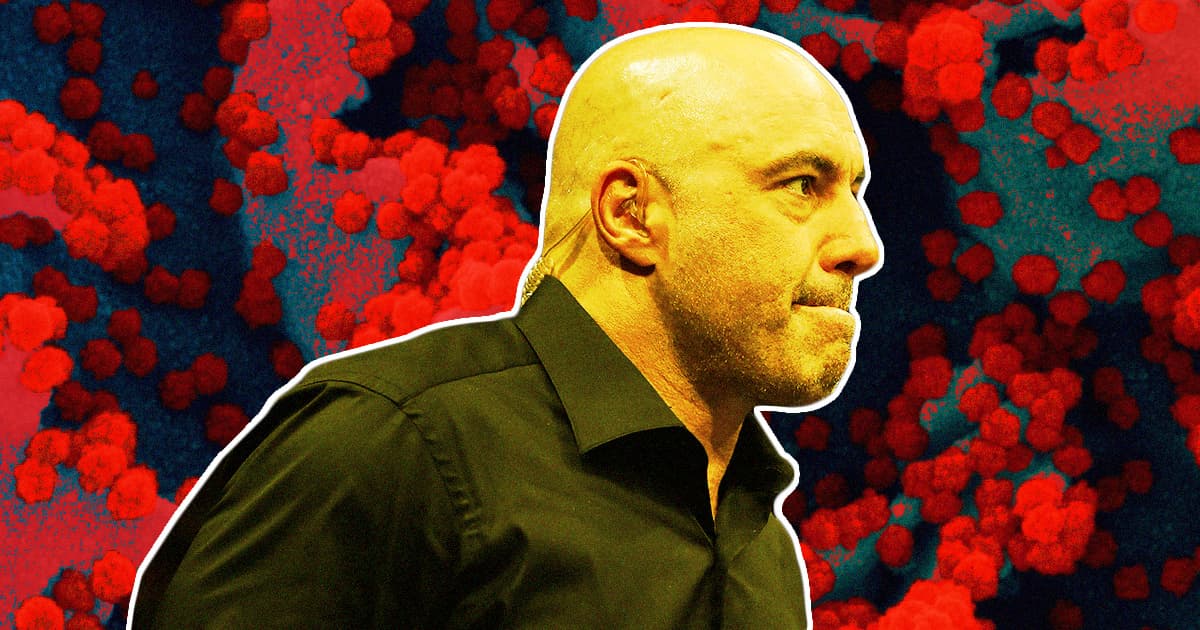 Prominent podcaster Joe Rogan has tested positive for the coronavirus.

Rogan has repeatedly voiced his doubts about the effectiveness of the COVID-19 vaccine, despite the overwhelming amount of publicly available evidence that it prevents most infections and nearly all life threatening cases.

"Throughout the night, I got fevers, sweats, and I knew what was going on," he said in an Instagram video in which he looked noticeably pale, noting that he would be quarantining.

Upon confirming he had COVID, Rogan "immediately threw the kitchen sink at it" with "all kinds of meds" including monoclonal antibodies, famously used by doctors to treat former president Donald Trump, and ivermectin, the dewormer that has grown in popularity — despite being shown to be completely ineffective at treating COVID.

His fans over at the r/JoeRogan subreddit were not impressed, ridiculing him with memes and pointing out the fact that he's clearly relying on his wealth to treat the disease — while publicly endorsing a potentially dangerous drug.

"If anyone needed further proof that Joe is an idiot, here it is," wrote one.

But Rogan doesn't just have fans on Reddit. His listener base reaches far wider than that, and that could be a problem. There are plenty of people out there, as many recent news reports have shown, that are willing to go as far as taking ivermectin treatments designed for horses in hopes of warding off the disease.

Rogan is sending a more-than-muddled message with his Instagram update. On one hand, the entertainer is doing everything in his power to get ahead of the disease — but rather than listening to science, he's allowing dangerous misinformation get mixed in as well.

It's not exactly a surprising move for Rogan. That type of playing both sides has landed the entertainer in hot water on more than a number of occasions. He has given a platform to a number of highly controversial figures over the years, most notably notorious conspiracy theorist Alex Jones, on multiple occasions.

But there are no two sides to effectively treating a deadly virus. Either a treatment is effective at preventing severe COVID or it is not. While the scientific due process has certainly been challenged by a quickly developing pandemic sweeping the world — the peer review process isn't known for its quick turnaround — the evidence is on the table for anybody to see right now: ivermectin isn't an effective treatment, and advertising it as such could be harmful.

At the end of the day, Rogan will likely recover from COVID sooner rather than later. We don't know his confirmed vaccination status as of yet, but there are treatments — ivermectin notably excluded — that can often prevent more severe cases. Plus he's not that old, greatly reducing his risk compared to a senior.

We can't know what Rogan's conclusion will be once recovered. At worst, as his fans speculate on Reddit, he will hail ivermectin as the miracle drug that cured him. At best, he will finally join the throng of other anti-vaxxers, who had a change of heart after battling the virus firsthand.

Making matters worse is the fact that most of the proven treatments Rogan is taking are restricted to those who can afford them or have access to adequate health insurance. Rogan has amassed considerable wealth, licensing his "The Joe Rogan Experience" podcast to Spotify for some $100 million last year.

But more worrisome is the fact that he's willing to further a worrying trend based that's based on misinformation by right-wing radio and TV hosts. More and more people across the country are desperately trying to get their hands on ivermectin. The US Centers for Disease Control and Prevention had to issue a health advisory last week to warn the public about a "rapid increase" in prescriptions of the drug.

Rogan already dealt a big blow to vaccination efforts by making misguided comments about young people not having to take the vaccine, claiming they're healthy enough.

In his defense, Rogan later issued an important factual clarification:  "I’m not a doctor, I’m a f*cking moron," he said on an April episode of his podcast.

Now, the entertainer is digging the hole even deeper by tacitly encouraging people to take potentially dangerous anti-parasitic drugs to treat COVID.

Fortunately, we have a highly effective — and free — alternative that is widely available in the US right now: a vaccine.

It's time that Rogan listen to the experts and stops spreading dangerous, misleading information. As he admitted himself, he's far from an expert himself.

READ MORE: Joe Rogan, a podcasting giant who has been dismissive of vaccination, has Covid.