We listened to the whole interview so you didn't have to. 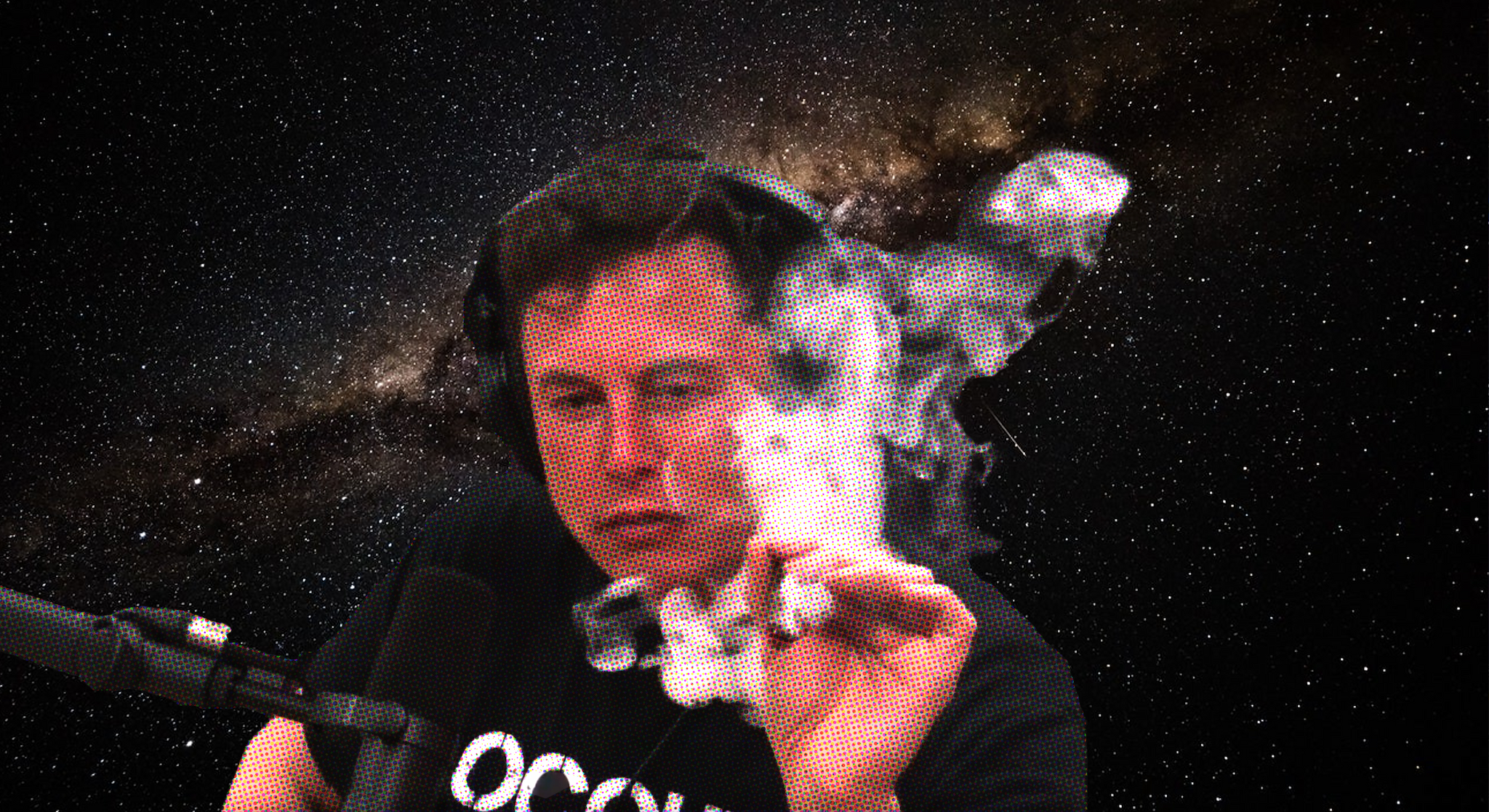 "You probably can't [smoke] because of stockholders, right?" Rogan asks.

Elon Musk spent yesterday evening in a rambling conversation with comedian and podcast host Joe Rogan, all while puff-puff-passing a blunt (Musk didn't inhale) and sipping on glasses of whiskey (with far, far too much ice).

The two-and-a-half-hour exchange ranges pretty widely. They got into the vastness of the universe, Musk's vintage car collection, electric planes, and whether we are really living in a simulation.

But that didn't come up. In fact, it only took 13 minutes for Rogan to steer the conversation from digging tunnels in LA to the dangers of artificial intelligence. Musk took the bait:

So, how far away are humans from creating something truly sentient? Rogan asked. Musk had some insightful words for him — that is, if you can actually figure out what the heck he's talking about.

You could argue that any group of people — like a company — is essentially a cybernetic collective of human people and machines. That's what a company is. And then there are different levels of complexity in the way these companies are formed and then there is a collective AI in Google search, where we are also plugged in like nodes in a network, like leaves in a tree.

We're all feeding this network without questions and answers. We're all collectively programming the AI and Google. [...] It feels like we are the biological boot-loader for AI effectively. We are building progressively greater intelligence. And the percentage that is not human is increasing, and eventually we will represent a very small percentage of intelligence.

But why would greater artificial intelligence matter if we're all just living in one giant simulation?

The argument for the simulation I think is quite strong. Because if you assume any improvements at all over time — any improvement, one percent, .1 percent. Just extend the time frame, make it a thousand years, a million years — the universe is 13.8 billion years old. Civilization if you are very generous is maybe seven or eight thousand years old if you count it from the first writing. This is nothing. So if you assume any rate of improvement at all, then [virtual reality video] games will be indistinguishable from reality. Or civilization will end. Either one of those two things will occur. Or we are most likely living in a simulation.

If Elon hasn't lost you there yet, get ready for multiple simulations. But there's a silver lining: outside of our simulations, it's probably boring as hell.

There are many many simulations. These simulations, we might as well call them reality, or you can call them multiverse. They are running on a substrate. That substrate is probably boring.

When we create a simulation like a game or movie, it's a distillation of what's interesting about life. It takes a year to shoot an action movie. And that is distilled down into two to three hours. But the filming is boring. It's pretty goofy, doesn't look cool. But when you add the CGI and upgrade editing, it's amazing. So i think most likely, if we're a simulation, it's really boring outside the simulation. Because why would you make the simulation as boring? [You'd] make simulation way more interesting than base reality.

They did get into some topics that directly had to do with Musk's various business ventures, including sustainable energy infrastructure, Tesla cars' safety features, and Vertical Take Off and Landing (VTOL) vehicles.

That's when Rogan retrieved the blunt, from a tacky box he got on vacation in Mexico. Wide-eyed Elon took a single timid drag. For the first time in a long while, he looked at peace.

Read This Next
Artificial Baby
Chinese Scientists Create System to Care For Embryos in Artificial Womb
Health Sale
Remember IBM's Amazing Watson AI? Now It's Desperately Trying to Sell It Off
From Our Partners
How to Stay Focused At Work And Meetings Using AI
From Our Partners
Improve Your Writing With Artificial Intelligence Tool Rytr And Earn $20 In Store Credit
From Our Partners
Build A Robotic Toy Car With This DIY Self-Driving Vehicle Kit
More on Sci-Fi Visions
FROM THE DEPT. OF...
Yesterday on futurism
Early 4th of July 2022 Deals You Can Get Right Now
Plastic Press
Monday on the byte
Kenyan Engineer Invents Method to Turn Waste Plastic Into Sturdy Construction Bricks
FROM THE DEPT. OF...
Jun 26 on futurism
Best Tablets for Note-Taking in 2022
READ MORE STORIES ABOUT / Sci-Fi Visions
Keep up.
Subscribe to our daily newsletter to keep in touch with the subjects shaping our future.
+Social+Newsletter
TopicsAbout UsContact Us
Copyright ©, Camden Media Inc All Rights Reserved. See our User Agreement, Privacy Policy and Data Use Policy. The material on this site may not be reproduced, distributed, transmitted, cached or otherwise used, except with prior written permission of Futurism. Fonts by Typekit and Monotype.