We're awarding those who are guilty of unrelenting bias. 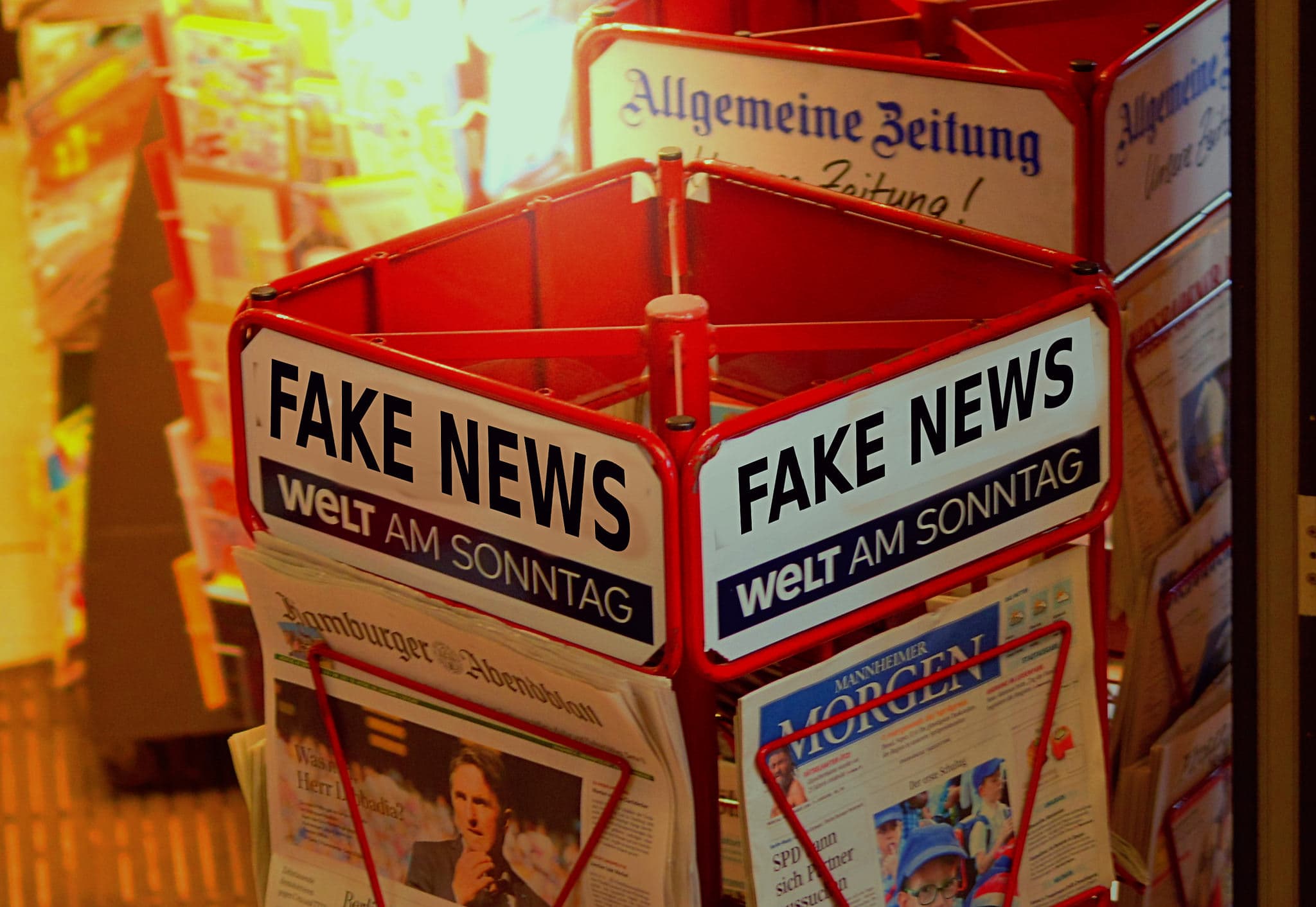 This week, President Donald Trump revealed the Fake News Awards. Yes, this is a real thing. The awards are meant to recognize (unnecessarily attack?) reporters and publications that, as the GOP outlines, are guilty of "unrelenting bias, unfair news coverage, and even downright fake news." This year's so-called winners include several esteemed journalists and organizations in mainstream media, such as Pulitzer Prize winner Eric Lichtblau, Pulitzer Prize nominee Thomas Frank, the New York Times, and the Washington Post.

Notably, all of the winners of this most unprestigious award corrected their errors shortly after the initial publication. And herein lies the problem. Because, while the outlets and individuals called out by President Trump took the issues in their reporting seriously, issuing corrections and setting the record straight, a plethora of individuals in Silicon Valley and the United States government make claims — or state blatant untruths — that they never attempt to correct.

It is true that mainstream media is not perfect. But it is also true that no one and nothing is.

Mistakes will happen. The best we can do is apologize, issue corrections, and implement systems to try and prevent such errors from happening again. The organizations and journalists cited by President Trump did that. There is little else they can do. It is true that mainstream media is not perfect. But it is also true that no one and nothing is.

As such, I feel that the Fake News Awards failed in their endeavor. They did not live up to their great goal of awarding those who are guilty of unrelenting bias. With this in mind, I would like to take the opportunity to correct this error and award individuals who are truly guilty of grievous and persistent errors when it comes to some pretty basic things.

In December of 2017, just one month ago, the Trump Administration released its National Security Strategy. In the document, the Administration dropped climate change as a U.S. national security threat. This move directly contradicts findings by the United Nations. In April 2017, the U.N.'s Security Council asserted that climate change is "a core security issue." The findings of the Trump Administration also directly contradict the findings of the U.N.'s Intergovernmental Panel on Climate Change (IPCC). The IPCC report is composed by hundreds of scientists and reviewed by thousands more, and it lists climate change as a threat to food, security, and human life.

Indeed, President Trump has recurrently denied the scientific reality of climate change, contradicting the findings of thousands of scientists and hundreds of national and international scientific organizations.

In the East, it could be the COLDEST New Year’s Eve on record. Perhaps we could use a little bit of that good old Global Warming that our Country, but not other countries, was going to pay TRILLIONS OF DOLLARS to protect against. Bundle up!

Last August, Gizmodo leaked a 10-page memo written by former Google engineer James Damore, entitled "Google's Ideological Echo Chamber." They referred to it as an "anti-diversity screed," one that would lead to Damore being fired (and a subsequent lawsuit). The memo makes a number of claims. Most of which, we aren't here to debate. However, we can weigh in on the science behind this line: "The distribution of preferences and abilities of men and women differ in part due to biological causes and that these differences may explain why we don’t see equal representation of women in tech and leadership."

According to Google's 2017 Diversity Report, 31 percent of Google's staff were women, and 69 percent were men. In 2014, 30 percent were women, and 70 percent were men. Progress? Sort of. Not the kind worth shouting about from rooftops though. So, is there any substance to Damore's statement? Does it explain the low numbers of women in Google's ranks and in leadership positions in general? The American Psychological Association responds with a resounding "No." – "one's sex has little or no bearing on personality, cognition and leadership."

Lise Eliot, associate professor in the Department of Neuroscience at the Chicago Medical School, concluded, in her book "Pink Brain, Blue Brain," that there is "surprisingly little solid evidence of sex differences in children’s brains." What about the STEM fields? "There just aren’t gender differences anymore in math performance," says UW–Madison psychology professor Janet Hyde. "So parents and teachers need to revise their thoughts about this."

Perhaps Silicon Valley execs should too.

3. Ajit Pai, Chairman of the FCC

Ajit Pai is most famously known for championing the repeal of net neutrality, which is a term that was coined by Tim Wu, a Columbia University media law professor. In essence, net neutrality asserts that internet service providers (ISPs) should treat all data the same — that they cannot charge users more for accessing certain kinds of content or applications; that they cannot speed up or slow down certain websites or applications.

In his official statement, Pai said that the repeal of net neutrality would "bring faster, better, and cheaper internet access to all Americans." However, while this move is in line with the desires of many ISPs, many experts assert that it will only benefit ISPs and that the average American will suffer. In a previous article, Florian Schaub, a professor at the University of Michigan’s School of Information, told Futurism that the move would actually result in less services being available to consumers: "I expect that consumers will either see a decline in available services or an increase in costs, and content providers and online services will have to enter into expensive agreements with ISPs." Similarly, Aram Sinnreich, a professor at American University School of Communication, told Futurism that Pai's vision of the future isn't in line with reality: "Without federally-enforced net neutrality, internet service providers are not only empowered, but actively encouraged to exercise discriminatory oversight of the internet traffic they carry. What this means is less competition, higher prices, and less incentive to innovate or improve services."

Despite the desires of most Americans, and the recommendation of many experts — including the former director of the Federal Trade Commission’s Bureau of Consumer Protection — Pai stands steadfast.

4. Jill Stein (and Other Anti-GMO Activists)

You probably remember Jill Stein as the Green Party's nominee for the 2016 Presidential race. According to her campaign website, she called for a moratorium on GMOs and pesticides until "independent research free from industry influence shows decisively that GMOs are not harmful to human health or to the health of our ecosystems."

Genetically-modified crops and embryos alike are a contentious topic. Should we be creating our own versions of naturally occurring organisms? The answer isn't easy, but Stein's claims go a little far. For example, she famously stated that GMOs don't help end world hunger.

Tell that to Normal Borlaug and the Nobel Prize committee that awarded him the Nobel Peace Prize in 1970 for his work on drought-resistant crops — and tell it to the hundreds of millions of people he fed through his work.

To be clear, as a report from the National Academy of Sciences asserts, GMOs must be carefully tested and studied, but they do have remarkable potential and, ultimately, Stein's assertions about how they do not assist our world cause unnecessary fear and backlash and do far more harm than good.

Human genome editing holds tremendous promise for understanding, treating, or preventing many devastating genetic diseases, and for improving treatment of many other illnesses. However, genome editing to enhance traits or abilities beyond ordinary health raises concerns about whether the benefits can outweigh the risks, and about fairness if available only to some people.

Furthermore, a comprehensive analysis by the advisory group to the National Academies of Sciences, Engineering and Medicine found that genetically engineered crops appear to be safe to eat and do not harm the environment. The report found no evidence that the crops had contributed to an increase in the incidence of cancer, obesity, diabetes, kidney disease, autism, celiac disease, or food allergies.

What about other things related to GMOs, like "organic" crops? That brings us to the next award...

In late 2017, Zooey Deschanel partnered with Attn: to create a five-episode "educational" series called "Your Food's Roots." The goal, according to the series' Facebook page, is to "set the record straight about organic vs. non-organic foods." In the third video of the series, Deschanel speaks with Daphne Bradford, a tech educator who works to provide technology training and certification opportunities to youth and who has been recognized by the Obama White House Champions of Change program.

However, the video leaves a lot to be desired in terms of...well, facts. Bradford claims, "organic, you know it’s all you, all original, everything with no pesticides and no artificial this, and grown in the soil that’s really been amended and taken care of." The problem? Organic farming does use pesticides. There's a whole list of pesticides allowed in organic farming.

Deschanel then warns viewers about crops that are, supposedly, particularly ridden with pesticides. "The Dirty Dozen is a list of twelve fruits and vegetables that you should strictly buy organic due to the amount of pesticides on them," she says. The list comes out annually and is commissioned by the Environment Working Group (EWG). It has also been discredited. As Forbes notes, "a 2011 paper published in the Journal of Toxicology concludes that 'consumer exposures to the ten most frequently detected pesticides on EWG's ‘Dirty Dozen’ commodity list are at negligible levels'"

That's all for now. Until next year...

Read This Next
Futurism
China Spotlight: Next AI Superpower?
Futurism
The Heroes We Need: An Overview of Who's Fighting for and Against Net Neutrality
Futurism
By 2030, You'll Be Living in a World That's Run by Google
Futurism
Net Neutrality is Under Attack, And You Need to Take Note
Futurism
Scientists Are Rallying and Marching on Washington
More on Op-Ed
SPONSORED CONTENT
9. 30. 21 on futurism
Buy Delta 8 THC Online: Top D8 Companies of 2021
SPONSORED CONTENT
9. 27. 21 on futurism
Delta 8 Carts Near Me: Top 15 Brands to Buy From
Mirror, Mirror
5. 16. 21 on the byte
Watch the James Webb Space Telescope Open Its Massive, Golden Mirrors
READ MORE STORIES ABOUT / Op-Ed
Keep up.
Subscribe to our daily newsletter to keep in touch with the subjects shaping our future.
+Social+Newsletter
TopicsAbout UsContact Us
Copyright ©, Camden Media Inc All Rights Reserved. See our User Agreement, Privacy Policy and Data Use Policy. The material on this site may not be reproduced, distributed, transmitted, cached or otherwise used, except with prior written permission of Futurism. Articles may contain affiliate links which enable us to share in the revenue of any purchases made.
Fonts by Typekit and Monotype.