Lashing Out
12. 15. 22 by Victor Tangermann
Lashing Out
/Future Society

Things are really starting to spiral out of control. 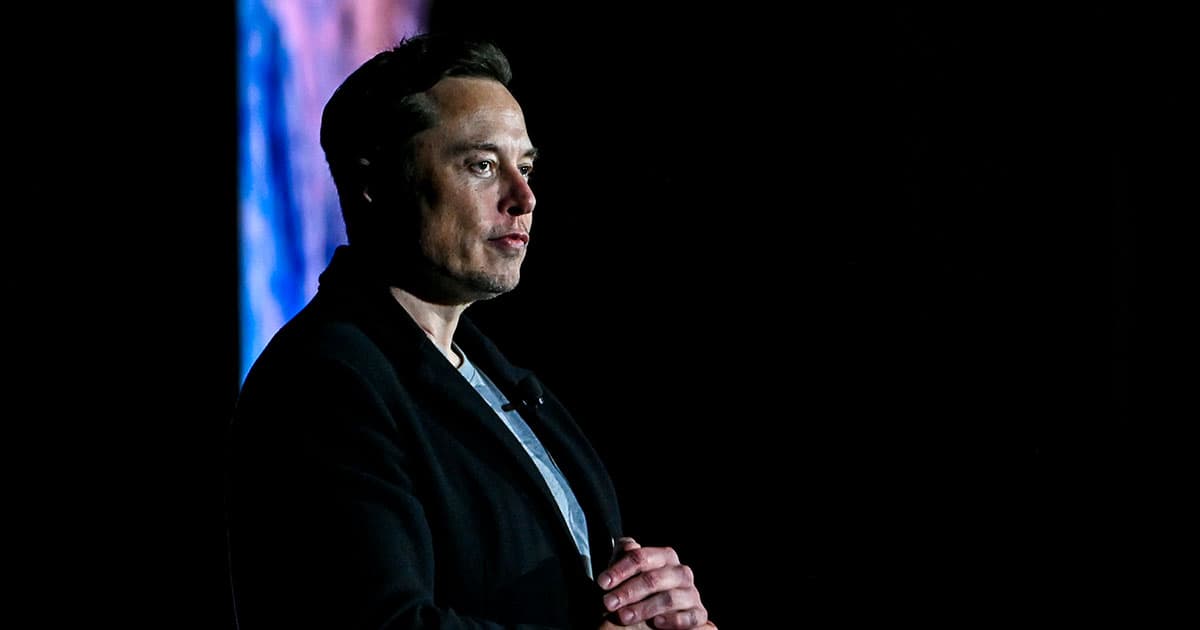 After specifically promising last month that he wouldn't block Jack Sweeney, a university student who has been tracking the movement of Musk's private jet using publicly available flight tracking information, Musk put the ban hammer down and suspended his Twitter account.

After the ban, Musk invented a new rule to justify it.

"Posting locations someone traveled to on a slightly delayed basis isn’t a safety problem, so is ok," he added.

It's a noteworthy policy change, considering that Musk has long claimed that he would never do this exact kind of thing.

"By 'free speech', I simply mean that which matches the law," he tweeted during the early days of the Twitter acquisition. "I am against censorship that goes far beyond the law."

Sweeney, after all, never broke any laws by posting publicly available flight data. In other words, Musk is building out Twitter's policies to specifically serve his own needs.

Meanwhile, accounts like Libs of TikTok, which has inspired threats of violence against children's hospitals across the US, are given carte blanche.

Ironically, a mere three hours later Musk seemingly broke his own brand new rule by posting a short clip showing a hooded person sitting behind the wheel of a car, panning down to the vehicle's license plate.

Musk's bewildering conclusion: Sweeney, who never shared any info beyond what city Musk's private jet was in, was responsible.

"Legal action is being taken against Sweeney and organizations who supported harm to my family," Musk thundered.

Let's take a step back and summarize. Musk said that any legal speech was allowed on Twitter. Then, when legal speech affected him personally, he instantly reversed his position. After a scary encounter with an alleged stalker — which, to be clear, is terrible and should never have happened — is Musk starting to understand why people don't want avowed Nazis on Twitter? No — instead, he's been reinstating their accounts.

Even Musk's most sycophantic followers on Twitter can see the pettiness and hypocrisy.

"One of the more disgusting things I’ve seen on here," another account agreed.

It's a particularly egregious, given the fact that less than a week ago, Twitter's former head of trust and safety Yoel Roth, who left the company after a disagreement with Musk, was forced from his home after Musk made baseless and shocking accusations against him.

Meanwhile, the billionaire CEO has been tweeting even more about unhinged conspiracy theories and right-wing punditry. Twitter is quickly turning into a safe haven for fringe movements such as QAnon.

His acquisition of the company has clearly brought him a lot of unwanted attention, with Tesla stock plummeting.

Should the attack on Musk's son score him some sympathy points? Perhaps. Nobody, and especially not their family, should ever be put in that position.

But given the sheer amount of damage Musk has inflicted on himself, one can't help but see his latest actions — nevermind the acquisition of Twitter itself — as a senseless lashing out by a man in the grips of a deep midlife crisis.