The plan to drill under L.A. is well underway. 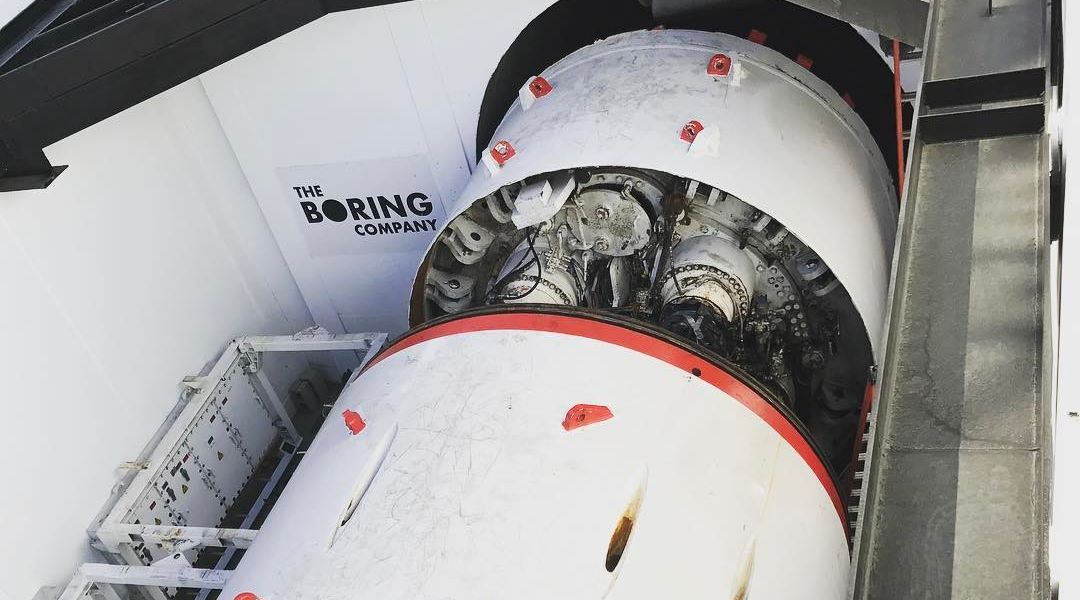 Despite all the buzz and excitement over Elon Musk's new tunnel-digging venture, the Boring Company seemed stalled at SpaceX's Hawthorne headquarters. Apart from experiments in said parking lot, the company wasn't really doing much actual digging in Los Angeles — until today.

Taking to his favorite platform for announcements, Musk tweeted that "Godot" — the Samuel Beckett-inspired Tunnel Boring Machine (TBM) weighing 109,000 kg (1,200 tons) and measuring some 122 meters (400 feet) long —has been on the move in L.A.

No longer waiting for Godot. It has begun boring and just completed the first segment of tunnel in LA.

Clearly, the Boring Company and the city of L.A. have discussed the project, though there's no information yet regarding the details. We do know thanks to a tweet from Musk earlier this month that L.A. mayor Eric Garcetti is supportive of the plans to tunnel below the city's traffic, so that's no doubt making it easier to get the necessary permits to actually start digging.

Not Your Ordinary Tunnel Network

The Boring Company isn't your ordinary tunneling company. Aside from wanting to make the digging process more efficient, Musk also wants to build something far beyond a simple network of underground roads.

A concept video and the company's website have revealed that the system would feature an electric sled capable of ferrying both people and cars across great distances at speeds of 200 km/h (125 mph). And it doesn't take much to imagine how this could easily be converted to support a hyperloop system.

The tunnels would eventually run under the greater part of L.A., but initial plans would connect Los Angeles International Airport (LAX) to Culver City, Santa Monica, Westwood, and Sherman Oaks. The Culver City route was the first to start construction.

Garcetti isn't the only one digging the tunneling idea. Recently, Chicago mayor Rahm Emanuel announced that he's also in talks with Musk for a high-speed rail line that would run from downtown Chicago to O’Hare International Airport. This could potentially be the Boring Company's second tunnel site.

Between boring tunnels, making self-driving electric vehicles, and ferrying satellites aboard reusable rockets, Musk really is positioning himself as the modern-day transportation guru.

Read This Next
Absent CEO
Tesla Investors Furious at Elon Musk for Vanishing During Crisis to Play With Shiny New Twitter
Stay Away
Tesla Is Having Extreme Trouble Hiring, for Some Reason
Musk Antics
Elon Musk Has a Big Problem on His Hands
Please Elon
Why These Tesla Owners Are Going on a Hunger Strike Against Tesla
Streisand Effect
Hurry Up and Watch These Videos Tesla Wants Removed From the Internet
More on Advanced Transport
Kapow
Friday on the byte
Self-Driving Car Plowed Into Active Fire Scene, Forcing Firefighters to Smash Its Window
Netflix and Drive
Monday on futurism
Mercedes Claims to Have Achieved Level 3 Automation, Beating Tesla
Battery Trouble
Monday on the byte
Tesla "Spontaneously" Bursts Into Flames While Driving Down Freeway
READ MORE STORIES ABOUT / Advanced Transport
Keep up.
Subscribe to our daily newsletter to keep in touch with the subjects shaping our future.
+Social+Newsletter
TopicsAbout UsContact Us
Copyright ©, Camden Media Inc All Rights Reserved. See our User Agreement, Privacy Policy and Data Use Policy. The material on this site may not be reproduced, distributed, transmitted, cached or otherwise used, except with prior written permission of Futurism. Articles may contain affiliate links which enable us to share in the revenue of any purchases made.
Fonts by Typekit and Monotype.