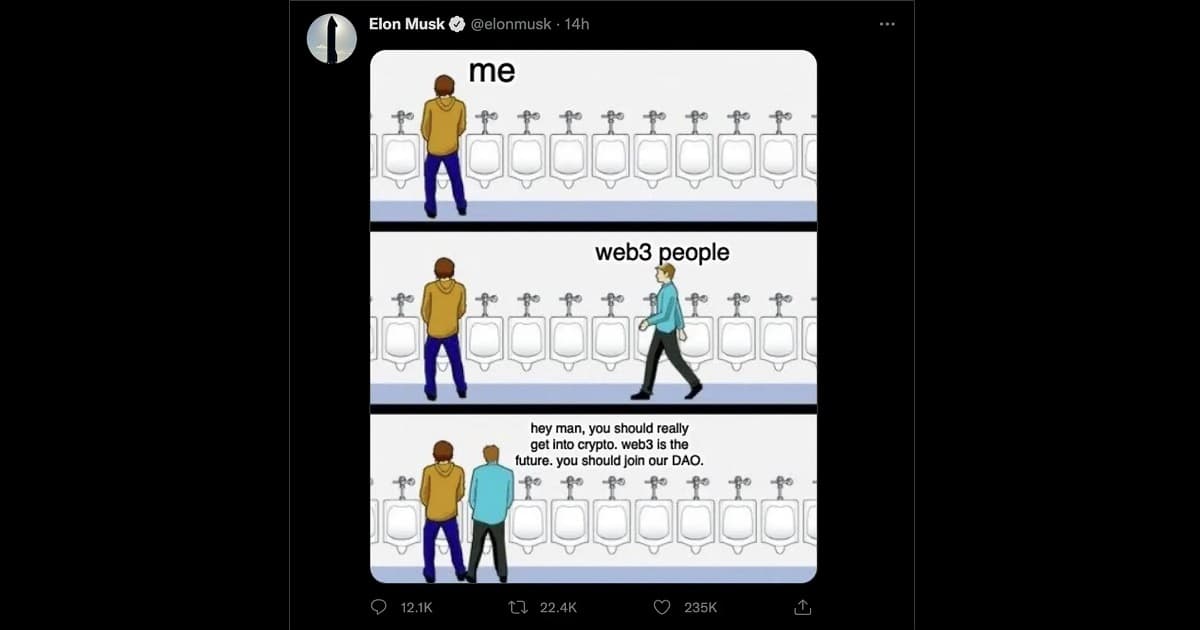 Is Elon Musk crashing the crypto market over a sibling rivalry?

The top three cryptocurrencies were each down Saturday morning — with the still-dominant Bitcoin down a jarring 12 percent — after the Tesla CEO tweeted a meme mocking crypto fans. The wildest part? It may have been inspired by sibling rivalry.

Friday evening, around 8:30 pm ET, the billionaire CEO took to Twitter to make fun of "decentralized autonomous organization" (DAO) and Web3 lovers, portraying them as evangelists who even pitched the blockchain gospel to urinal neighbors.

"Hey man, you should really get into crypto," meme accuses Web3 fans of saying in the bathroom, though Musk didn't include any commentary of his own.

According to WIRED, Web3 — a term coined in 2014 — can most easily be defined as "a decentralized online ecosystem based on the blockchain." We're currently living in what would probably be called Web2, which is controlled by mega-corporations with little government oversight. DAOs, or a  usually involves a group of people who pool resources and democratically decide to make investments, according to CNBC.

Both are supposed to usher in the new era of crypto, so why is Musk — usually a major booster of crypto tech — poking fun?

The answer might lie in a big announcement his brother, Kimbal Musk, made just last week. A Nov 30 CoinDesk article says the younger Musk sibling is creating the Big Green DAO, an offshoot of the nonprofit that provides gardening education to children. CoinDesk also reports that Kimbal's right hand man comes from Decentraland, a metaverse company.

Could Elon Musk's tweet be a reference to his brother's financial activity? Kimbal told CoinDesk he's been taking cues from "religious" crypto traders who obsess over creating a better world.

"The religious are awesome," Kimbal Musk said. "They are total believers that this will decentralize the world [and] bring power back to the masses."

Maybe Elon thinks his brother has gone off the crypto deep end, but it sucks for the IRL people whose investments are crashing. It's not the first time Elon's tweets have deeply affected crypto markets, but at least those weren't caused by some petty familial squabble (that we know of).

Then again, Elon's gonna Elon — maybe he just isn't afraid to buck the trend, regardless of what his brother does.

More on Decentraland: Plot of Metaverse "Land" Sells for $2.4 Million

Read This Next
Sleepless in San Francisco
Elon Musk Reportedly Building "Sad Hotel Rooms" at Twitter HQ for Exhausted Employees
But His Emails!
Twitter Cofounder Says Elon Musk Is "Not a Serious Person"
D*** Pic Freedom
Elon Musk Thinks It’s Likely that “Something Bad” Will Happen to Him
Abso-Effing-Lutely
Free Speech Absolutist Elon Musk Discovers That Some Speech Is Unacceptable After All
Be Better
Elon Musk Reportedly Slashed the Team That Fights Child Sexual Abuse on Twitter
More on Future Society
Fake Shots
Yesterday on the byte
That Viral Video of Stephen Curry Sinking Impossible Shots Is Fake
Beach Watch
Monday on the byte
Mysterious Object Emerges From Beach in Florida
Unorthodox Urinal
Dec 2 on the byte
Scientists Say They've Figured Out the Ideal Urinal for Not Splashing Back
READ MORE STORIES ABOUT / Future Society
Keep up.
Subscribe to our daily newsletter to keep in touch with the subjects shaping our future.
+Social+Newsletter
TopicsAbout UsContact Us
Copyright ©, Camden Media Inc All Rights Reserved. See our User Agreement, Privacy Policy and Data Use Policy. The material on this site may not be reproduced, distributed, transmitted, cached or otherwise used, except with prior written permission of Futurism. Articles may contain affiliate links which enable us to share in the revenue of any purchases made.
Fonts by Typekit and Monotype.